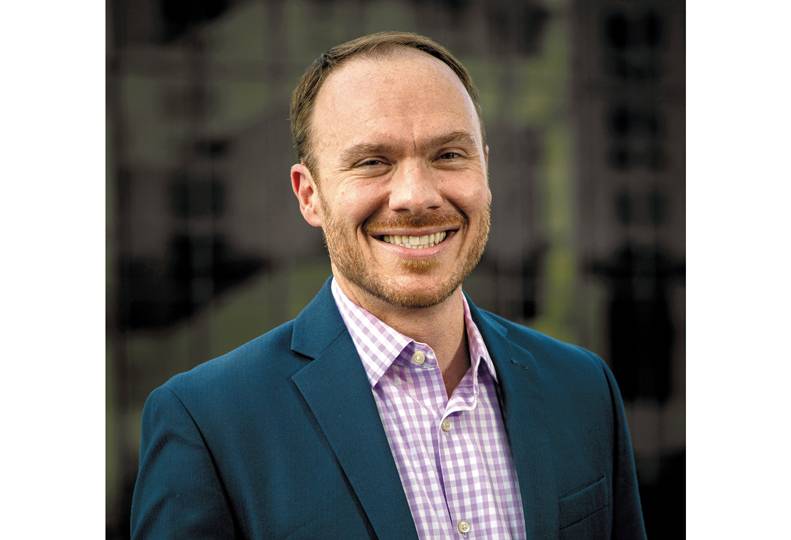 Lars Gilberts has headed the nonprofit University District Development Association for more than two years. In that time, former U District board chairman Karl Otterstrom says, Gilberts has accelerated progress on several projects and goals, including construction of the University Gateway Bridge.

“He’s passionate about people and he brings stakeholders together,” says Otterstrom, director of planning and development for Spokane Transit Authority. “He is a relentless advocate for the mission of the University District and the opportunity that is Spokane.”

Gilberts, 38, says that despite having moved three dozen times in his life, he’s always viewed the Spokane area as home, as his grandmother lived in Clayton when he was growing up, and he frequently returned to visit.

He eventually landed in Florida, where he became director of financial stability for Branches Inc., a financial services nonprofit.

But Gilberts says he still longed for the place he thought of as home. When he had the opportunity to return to Spokane as executive director — his title later changed to CEO — of the University District Development Association in early 2017, he jumped at the chance.

“I am a massive Spokane cheerleader,” Gilberts says. “If they would create a job of Spokane concierge, I would take that job in a heartbeat.”

Gilberts views Spokane as a city created and fueled by pragmatic, progressive problem-solvers.

He says he has been building on the work of others, including his predecessors within the University District and their precursors, the Momentum ‘87 group.

“The University District and everything that’s in it, in large part, is a legacy of that,” Gilberts says. “In the end, it’s building on all these legacies of saying, ‘If it matters, we need someone who will be the champion and the protector, the paladin, for this vision, moving forward.’”

Gilberts says he’s proud of tightening the organization’s budget and developing reserves, unifying the nonprofit’s board of directors, and reaching out to community partners to build and strengthen relationships.

“We weren’t engaging our partners very well,” he says. “I think people thought that we were here to enrich ourselves and to improve our backyard of our district.”

He estimates 60% of his day is dedicated to “collecting and connecting dots,” from people to resources to concepts.

“I am most gratified when I help other people succeed,” Gilberts says. “That’s my personal, professional, and spiritual gift.”

“I want us to uniquely use the resources that we have to be able to create jobs and opportunities in all those communities, across the city, across the region, so we can specialize in the thing that we are the best at, and then support others in the things that they’re excellent at,” Gilberts says.

One of the biggest challenges Gilberts says he faces is bringing together Spokane’s business with its philanthropic efforts.

“I would love to help our community excel even more at merging our business practices and our community service and philanthropy,” he says. “The problem that I’m trying to overcome is that Spokane has a good business sense, and we’re incredibly generous and philanthropic and collaborative. But I do not see as much as we could of those two things joining. I think there’s so much more opportunity to say, ‘how can our investments, our policies, impact the social good and make mine a more competitive business?’”