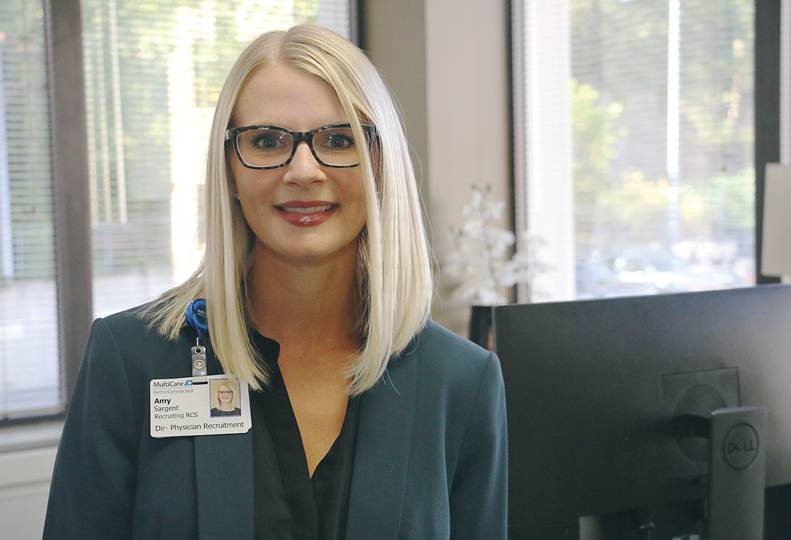 Amy Sargent has worked for Rockwood Clinic for the past 13 years through its transition from a physician-owned health care clinic, to its purchase by Community Health Systems Inc. in 2010, to its most recent iteration as MultiCare Rockwood Clinics since the organization was purchased again in 2017.

It’s that dedication and drive through the multiple transitions that makes Sargent a valuable member of the MultiCare team, says Alex Jackson, president and chief operations officer at MultiCare Rockwood Clinic.

“What differentiates her is her emotional intelligence. She has really good people skills,” he says. “She listens well. She understands issues at the macro level.”

Dr. Geoff Swanson, chief medical officer of MultiCare Rockwood, in Spokane, adds, “She is the face of a large portion of the medical community and the high standard and high-quality acumen of our medical providers in the community.”

Sargent, 36, attributes her work ethic to the teachings of her parents.

“They’ve instilled in us at a young age that we’re to work, and work hard,” she says. “Be punctual and reliable.”

Her father, Frank, has retired from the construction industry, she says, while her mother, Jeanne, still works as a corrections officer in Airway Heights.

As director of physician recruitment, Sargent says she and her team work to bring talented physicians from around the country to Spokane to serve the community.

“It’s really gratifying to be able to hire physicians to be able to come in and help take care of the Spokane community,” she says.

In her role, Sargent says she manages physician contracts, onboarding, and recruitment.

Sargent, who was born and raised in Spokane, attended Eastern Washington University and earned a degree in marketing and human resources.

Currently, Sargent is working toward a Master of Business Administration degree from Whitworth University.

“If I ever decide to promote or grow within my company, or just in general, I feel like I needed to have it,” she says of her MBA pursuit. “I felt like my kids were at a good age to do it, pretty soon they’re both going to be in school and in activities, and there wouldn’t be a lot of time for it.”

When not working or in class, her downtime is spent with her husband, Kyle, and her two daughters, Payton and Brooklyn, Sargent says.

Swanson adds, “She balances all of the demands of her career with a family and does a very good job in being devoted to that as well.”

While her career hasn’t been without its challenges, Sargent says her biggest challenge to date would be balancing her career while homeschooling her children during the pandemic.

Sargent and her husband were both working full time and their kids were in school, she says.

But when the pandemic hit in mid-March, effectively shuttering schools and removing childcare options for most parents, Sargent says she had to step into a teacher role with her kids.

Looking forward, Sargent says she doesn’t have a specific career path laid out.

“I don’t have a track where I want to be CEO or I want to be president someday,” she says. “I really just want to do meaningful work and be helpful.”