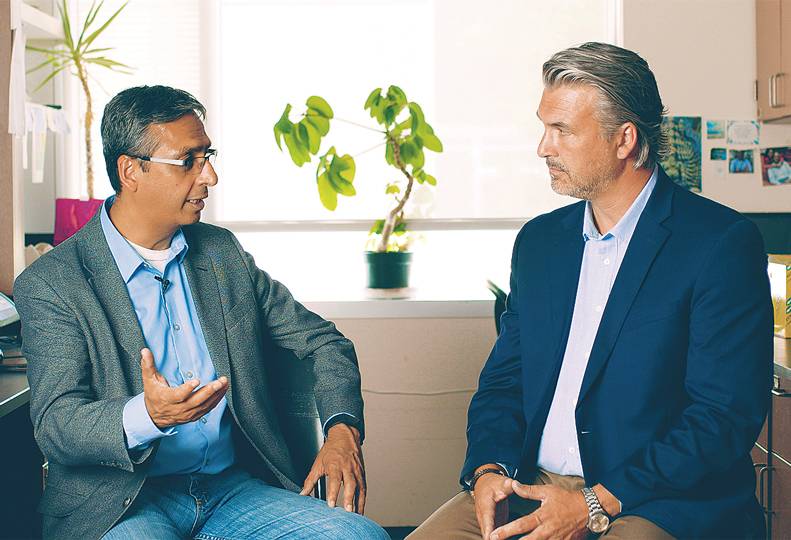 Mike Werner, previously CEO of Ag Energy, has been named CEO of NuPhy’s operations. NuPhy founder Amit Dhingra, who holds a doctorate in plant molecular biology from Delhi University, in India, has been named chief science officer for the combined entity.

The acquisition of Ag Energy was completed on Dec. 31. Werner declines to disclose the terms of the transaction or revenues for the respective companies.

NuPhy currently employs 21 people from both entities, all of whom are expected to remain with the company. Six employees are based at the company’s 2,300-square-foot office and storage building at 7921 E. Broadway, in Spokane Valley, and 13 employees work in 8,000 square feet of lab and office space in Pullman. Two employees work remotely.

“The goal right now is to obviously take care of the team we have and make sure everybody is comfortable, so we’re keeping all the employees. We’re adding sales and marketing formally at both organizations,” Werner says.

NuPhy, which opened in March 2020, provides virus- and disease-free plants, as well as genetic testing and analytics services for farmers and growers.

Ag Energy produces biochar, which is a type of carbon produced from agricultural waste products such as wood, plant materials, or manure. The biochar produced at Ag Energy is derived from crop waste and is designed to improve crop quality and increase crop yields.

“We started talking about this opportunity to create an integrative company that works at any point in time where a customer, farmer, or a grower may need help with their soils, new plants, or existing plants that need genetic testing, analysis, and virus testing,” Werner says. “We can test for 2,400 different viruses.”

The biomass processing units, which are housed in 20-foot shipping containers, are located at a facility just outside of Sprague, Washington. Two site technicians commute from Spokane to that facility for work. Spokane-based design and manufacturing firm Highwood Global LP is the contract manufacturer for the units, Werner says.

Dhingra says, “NuPhy makes healthy plants inside its system. Ag Energy provides material that makes soil healthier, and together we can ensure that farmers can continue to grow healthier plants. That’s the whole life-cycle.”

Werner, 52, adds that the company also can store genetic materials for farmers to use. If a farmer sees a desirable trait in a particular plant, NuPhy can store the plant and propagate it as well.

“So when they want to plant more, they just give us a call and we say okay,” Werner says. “Then, at the end of the lifecycle, we can take the crop waste, the leftover materials, and create biochar, and start all over again.”

Werner says the acquisition was a natural fit since both companies are rooted in science.

Dhingra, 51, says that while he was growing up in India, food was grown with more of an emphasis on caloric content than on nutrition. That concern sparked his interest in horticulture, and now he works to produce nutritious, healthy crops that are profitable for farmers, he says.

He says he was first introduced to Ag Energy through Steve Rector, chief financial officer for Cowles Co., which had invested in his former agricultural technology company Phytelligence Inc.

“Steve Rector also asked me to provide scientific support to Ag Energy,” Dhingra says. “He asked me to be chief science officer.”

He adds that he was skeptical of biochar before accepting the offer to research its viability for crops.

“My first answer was that biochar is snake oil, because that was the impression in the scientific field,” he says.

However, Dhingra says research shows that Ag Energy’s biochar products can increase crop yields for tomatoes by 57% and onion yields by 37%. In one variety of lettuce, there was an increase of 80% in fresh weight during a trial funded by a Sustainable Agriculture Research Education grant at the organic farm on the WSU campus, in Pullman.

The biochar produced by Ag Energy from agricultural waste products can be formulated with specific biological, chemical, and physical properties that benefit soil density and foster the growth of beneficial microbes, Dhingra adds.

Werner contends that, because of the formulation of the biochar, growers don’t have to use a large amount of the product in their crops.

Most of NuPhy’s customers are based in sustainability, agriculture, and timber industries in the Pacific Northwest, he says.

One client, Vaagen Timbers LLC, of Colville, Washington, purchased a biomass processing unit to process wood shavings into biochar, which will then be used to heat the mill’s kiln, Werner says.

He adds that another client, Columbia Pulp LLC, which operates an alternative fiber market pulp mill in Dayton, Washington, works with NuPhy by sending its leftover wheat straw from its paper products to process and sequester carbon from.

Dhingra says the company’s name, NuPhy, comes from the roots of two words.

The next step for the company is to expand research in other parts of the country, including at Texas A&M University, in College Station, Texas, where Dhingra recently has accepted a position as professor and department head of horticultural sciences.