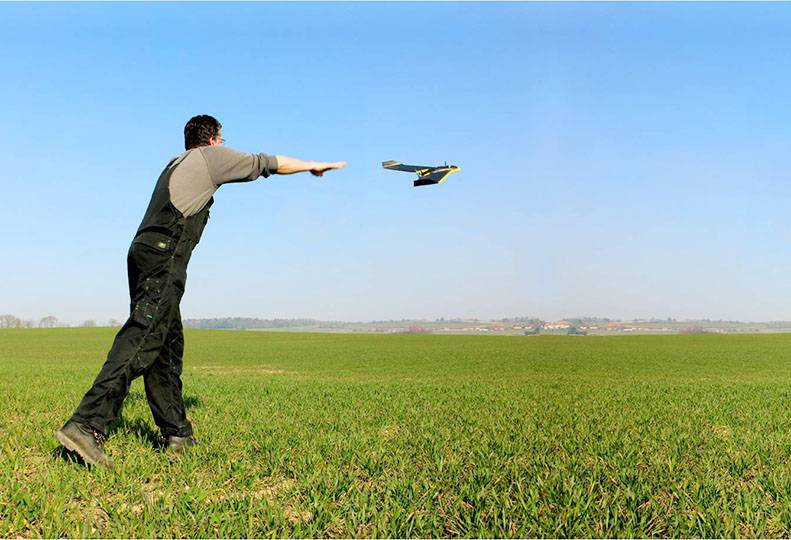 Three Idaho companies, including Hayden-based Empire Airlines, have teamed up in a venture that aims to adapt drone technology to help farmers boost crop yields.

The venture, Empire Unmanned LLC, is the first company authorized by the Federal Aviation Administration to use drones for commercial agriculture, claims Scott Marikis, vice president and chief financial officer of Empire Airlines.

“It will make farmers more efficient,” Marikis says of the services Empire Unmanned plans to provide.

“Farmers will be able to respond to plant conditions quickly, increasing yields and decreasing inputs,” he says. Inputs include irrigation, fertilizers, and pesticides.

Marikis says drones equipped with special cameras can collect images in various light spectrums with details down to 1 millimeter in size.

“Depending on the resolution, you can see bugs on leaves,” he says. “Software stitches photos together and creates a mosaic that tells what’s going on with crops.”

Empire Unmanned is based at Empire Airlines’ 50,000-square foot corporate facilities at 11559 N. Atlas Road, north of the main runway at the Coeur d’Alene Airport.

Other partners in the venture are Advanced Aviation Solutions LLC, of Star, and Blair Three Canyon Farms, of Kendrick.

Empire Unmanned plans to make its first commercial drone flight next month, pending final FAA authorization for the specific airspaces it can fly in.

“We’re hoping it will be somewhere in North Idaho,” Marikis says of the anticipated initial launch of Empire Unmanned.

With only 13 exceptions so far, commercial use of drones, also called UAVs for unmanned aerial vehicles, is prohibited by the FAA until the federal authority writes up regulations for them, he says. No other company is authorized to use drones for agriculture.

“We’re exempted from rules that haven’t even been written,” Marikis says.

Empire Unmanned obtained the exemption because of the combined expertise of the three partner organizations, which give it a competitive advantage, Marikis asserts. Jeff Sayer, director of the Idaho Department of Commerce, acted as the conduit to bring the three concerns together, he says.

Empire Airlines, the majority owner of Empire Unmanned, has the business infrastructure in place with a longstanding relationship with the FAA, Marikis says.

Ward, who also is president of Empire Unmanned, had a 20-year Air Force career, nine years of which he flew Predator and Global Hawk drones and worked on UAV policy.

He says Advanced Aviation Solutions will handle all flight operations.

“Marketing, finance, and all the rest of the business will be done by Empire Unmanned,” Ward says.

At the outset, Empire Unmanned will fly fixed-wing eBee UAVs supplied by Switzerland-based senseFly, he says.

“There were only a few UAVs that had a lot of testing and documentation we thought were suitable for the FAA,” Ward says.

The V-shaped eBee UAVs, which look something like miniature stealth aircraft, have ridged foam airframes with a 38-inch wingspan and weigh roughly 1.5 pounds, including the camera. They fly within 400 feet of the ground at speeds ranging from 25 to 56 mph.

Ward says the electric-powered eBee UAVs fly for up to 45 minutes on one battery charge, and can cover 160 acres in 30 minutes.

Cameras are controlled by GPS and take photos roughly every two seconds depending on airspeed and altitude.

A pilot and an observer will make up two-person teams in the field.

The pilot builds the program for the specific flight, Ward says. “When it starts flying, the pilot is just there to override it and tell it to come home or get out of the way of an airplane,” he says.

In addition to the Advanced Aviation Solutions crews, Marikis says Empire Unmanned expects to have 15 employees before the end of May. “The company’s growth will depend on customers and the areas we’re authorized to fly in,” he says.

Empire Unmanned is still working out a fee schedule, and costs likely will be calculated by the acre, Marikis says, adding that the service will be less costly than conventional aerial photography and less time consuming than physically inspecting large fields on the ground.

The other partner in the venture, Blair Three Canyon Farms, is headed by Robert Blair, who says, “We’re at the front end of a brand new industry—commercial UAV use.”

“Using UAVs, you are better able to pinpoint anomalies in the field,” he says.

Drones can be used to photograph crops at any stage of growth in several spectrums. Computer enhanced images can demark subtle differences in the health of the plants.

He says that prior to using drones his precision agriculture practices were mostly reactive, meaning data were based on already mature crops.

“You can’t do more to improve a mature crop,” he says. In such a case, adjusting inputs would be for the benefit of the next crop, he says.

Blair, a fourth-generation Idaho farmer, produces grains and legumes on 1,300 acres of land north of the North Fork of the Clearwater River, about 40 miles northeast of Lewiston.

He says he was one of the first farmers in the U.S. to own and use a drone for farming when he bought a radio-controlled hobby plane in 2006 and fitted it with a camera.

“When I started, I had equipment and software that didn’t communicate or work well with each other,” he says.

Blair says he was on his own to learn aviation and camera technologies simultaneously. “The technical support wasn’t there, and it was a steep learning curve,” he says.

When Blair gave his first ag-show presentation in 2007 on UAVs’ role in precision farming, the concept didn’t seem to take off, he says. By 2013, though, he says, at least six vendors were selling hobby UAVs at agricultural trade shows.