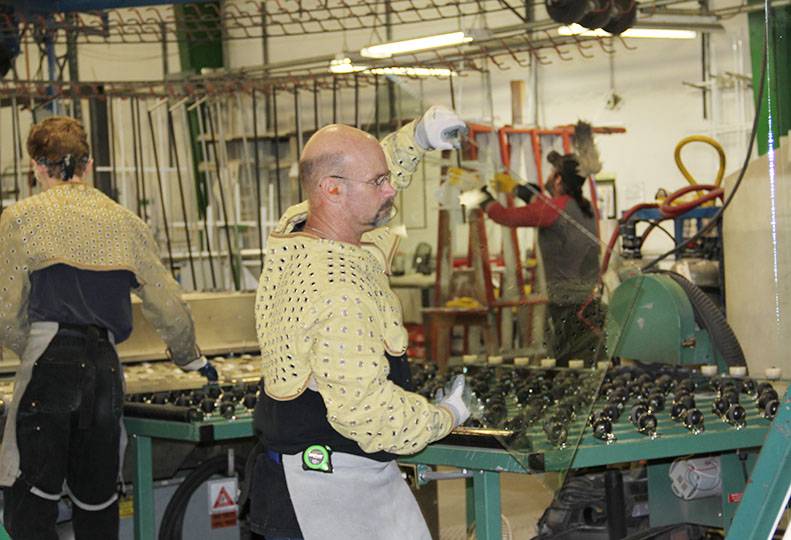 -—Virginia Thomas
Cascade Windows, with its manufacturing facility at 10421 E. Montgomery in Spokane Valley, has more than 200 employees here. It was founded at Liberty Lake in 1989 as Window Products Inc.

Spokane Valley-based Cascade Windows, already one of the larger vinyl window and door manufacturers in the western U.S., is expanding to the Southwest.

It says it has acquired Tempe, Ariz.-based manufacturer Paramount Windows, boosting its overall workforce to more than 850 employees. Cascade, which operates as Window Products Inc. and is a portfolio company of Altamont Capital Partners, a San Francisco-based private investment firm, also has facilities in Portland and Salt Lake City.

“We’re becoming a player,” says Randy Emerson, Cascade’s CEO. “We decided it was time to take our platform and expand our geographic region. It’s something we wanted to do for quite a while. It takes our brand, it takes our service market into other areas of the market. Overall it’s a great fit with our culture, with our products, and with our customers.”

Emerson declines to disclose the terms of the Paramount Windows transaction, which was completed at the end of June.

He says Cascade will continue to look to expand, though the company will focus less on increasing its geographic scope.

“What we’re really looking for are companies with similar cultures,” Emerson says. “It’s not so much a geographic target as it is just looking for companies that fit into that category.”

While the company will likely continue to expand and acquire other manufacturers, Emerson says these changes are unlikely to affect its facility here, located at 10421 E. Montgomery, where it occupies a six-building campus and currently employs about 200 people full time.

“From a production standpoint, we build more product there than any other facility today,” Emerson says. “Over time some of the functionality may be consolidated, like back-office work, but that’s yet to be determined.”

Cascade Windows was founded in 1989 in Liberty Lake as Window Products Inc. In September 2004, the company announced a name change to Cascade Windows. Emerson became an equity owner and the company’s CEO with the completion of the acquisition of Portland-area LbL Windows Inc in 2010. Cascade Windows added 150 employees in a 2011 merger with Empire Pacific Windows, of Tualatin, Ore.

In late 2012, Altamont Capital Partners announced it had acquired Cascade Windows as part of a restructuring with lenders and equity holders. At the time, Cascade Windows had more than 200 employees in the Spokane area and about 400 employees companywide.

Of the total number of employees companywide, about 30 percent work at the Spokane Valley facility. Emerson estimates another 30 percent are located in the newly acquired plant in Arizona, while the Salt Lake City and Portland-area facilities each employ about 20 percent of the company’s workers.

Emerson says Cascade Windows, like many other companies in the industry, faced lean times in the Great Recession.

“It was brutal,” Emerson says. “For the market as a whole, people were off as much as 50 percent, sometimes more. And we were certainly part of that. When the market turned down, a lot of competitors disappeared.”

He says the company held together with the goal of coming out of the recession stronger than before.

“We took a real hard look at the opportunities and said, ‘Hey, if we position ourselves correctly, we’ll more than double our piece of the pie,’” Emerson says. “We felt if we could make it through that downturn and we could be one of the last ones standing, we could be one of the big players when we came out of that.”

Emerson declines to provide revenue figures for last year, but says they were “up significantly.” In a listing of the top 100 manufacturers for last year, Window & Door magazine listed the company’s annual sales at between $50 million and $100 million.

“We’re trending up on core sales,” he says. “We’re trending up roughly 25 percent to 28 percent, and we’re expecting at least that next year. In business, you’re either growing or you’re shrinking. There’s no stagnation allowed.”

Paramount Windows, which claims to be one of the largest window manufacturers in Arizona, had a similar growth-minded strategy to that of Cascade Windows as it worked to come out of the lengthy market downtown, Emerson says.

“The leadership group that Paramount had kind of the same vision of being the last one standing,” Emerson says. “They came out of it quite well.”

During the next six to eight months, the company will transition to the Cascade Windows name. Until then, the company has been rebranded as Paramount-Cascade, Emerson says.

Cascade Windows manufactures vinyl windows and sliding glass doors for both newly-constructed homes and for remodels.

“Like everybody else, we go where the money is, and right now that’s mostly new-home construction,” Emerson says. “Retrofit is still a big piece of our business, but it’s coming back relatively slowly.”

He says a potential new line of patio doors is looking promising.

“We’re working on one that we think has a good chance of making it through the gauntlet of new products,” Emerson says. “Of all the products we’ve seen in the last four or five years, this is a game-changer for the patio door market.”

Overall, Emerson is upbeat about the general outlook for Cascade Windows.

“The future is bright. We’re a solid company. We’re lean,” Emerson says. “I can’t say enough about the folks that work and build our company every day. They’re hungry to learn. Our motto of building people, making windows holds true, and we’re looking to keep it that way in the future.”

As for the company’s headquarters, Emerson says Cascade Windows will stay true to its roots.

“It’s a great company, and we’re dedicated to Spokane,” Emerson says. “That’s our home base and always will be.”