City of Spokane works to bring down 'silos' 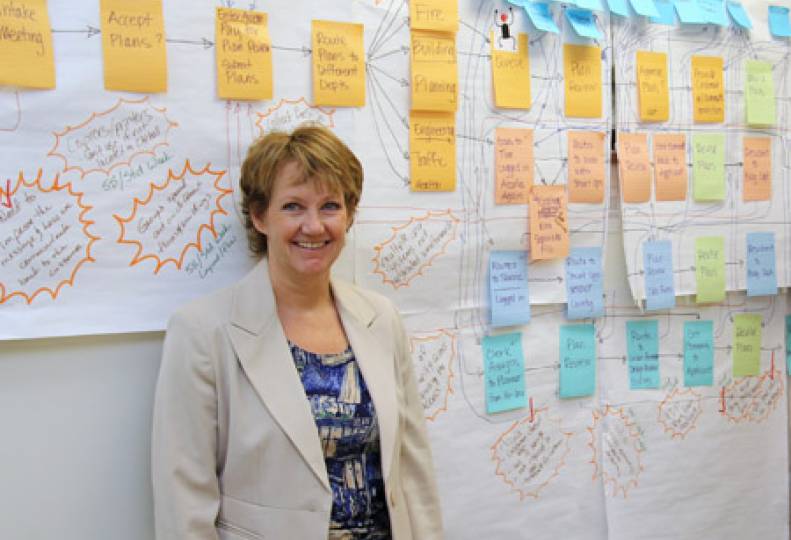 Jan Quintrall, the city of Spokane's director of business and development services, says the new permit system should be fully ramped up for the 2013 construction season.

You can't see it when driving along Spokane Falls Boulevard, but according to Jan Quintrall, the silos are coming down at City Hall.

Quintrall, the city of Spokane's director of business and development services, says the city plans to develop a new building permitting center on the third floor of City Hall and to retrain employees from various departments who will work closely there to provide customer services.

The process represents a minor physical change—less than $10,000 will be spent reconfiguring the permit center—but it's part of a larger cultural change, Quintrall says.

The city currently is reviewing its plans with labor representatives to ensure the planned training and other changes don't go against current union agreements, and Quintrall says she hopes to have "robust training" started by mid-August and to continue the training as construction activity slows down in September and October.

"So when we kick off 2013, everybody knows what they are doing, and our customers are seeing a real change in the level of service," she says.

Also, the skywalk that connects the third floor of City Hall to the River Park Square shopping center will reopen so people can access the permit center directly, though a date for that reopening hasn't been set yet.

After a series of structural changes throughout this year, the business and development services division now is composed of four departments: planning and development, engineering services, streets, and asset management. It employs 244 people—roughly one-eighth of the city's workforce—and has a 2012 budget of $123.8 million.

Roughly 50 people in that division are involved in some aspect of permitting, either daily or on an as-needed basis, and the building permitting operation is the most visible part of the division.

Quintrall says city employees involved in permitting often have operated in silos, figuratively speaking, with each concentrated on its area of expertise but without full knowledge of what others involved in approving a project were doing. In many cases, she says, a permit applicant would have to track down a variety of people to determine the status of an application.

Moving forward, she says, the city plans to cross-train employees so, for example, a permit application's progress doesn't stall because one person is on vacation. Also, employees will be trained on customer service, including handling phone calls, and process logistics.

Using another analogy, Quintrall describes the permit center as the center of a wheel, with the city workers involved in permitting as the spokes. In the past, she says, permit applicants have been sent to each spoke; now, she says applicants will be able to stay in the center and have the expertise come to them.

"Our whole goal is to get everything done quicker on their time, not ours," she says.

The planned changes in the permitting center follow a series of realignments in the business and development services that have occurred since Mayor David Condon took office in January.

"In business, you always get accused that you never cut management," she says. "Well, that's where we started."

Neighborhood services, which oversees neighborhood councils, code enforcement, and other services, also had fallen under the business and development services division at one point, as had arts and weights and measures.

Neighborhood services is now its own division, and the city is in the process of turning weights and measures duties over to the state, which has such a department that tests commercial devices, commercial packaging information, and fuel quality, among other tasks. Most cities in the state don't have such a department and let the state handle that, Quintrall says.

The arts department is expected to be eliminated, she says, though the city is expected to continue to fund arts through partnerships with private organizations.

The streets department was added under the business services division, and a new division called asset management was created.

Asset management, Quintrall says, oversees capital programs and infrastructure investments, including securing and managing state and federal funds for street and bridge work. The department also oversees parking and the parking infrastructure, as well as buildings and other real estate the city owns or operates.

As part of that latter responsibility, the asset management department handles surplus real estate the city owns. One of its highest visibility properties being marketed for sale currently is the building at 510 N. Lincoln, on the north bank of the Spokane River, that Anthony's Restaurants occupies and that overlooks the Spokane Falls.

"It's a unique property," Quintrall says. "We're marketing it throughout the West."

Quintrall is acting as the head of that department currently and says she'll do so until some surplus properties are sold to fund partially the hiring of someone to fill that position.

Heads of other departments in the division are Mark Serbousek, streets; Mike Taylor, engineering services; and Scott Chesney, planning and development.

Looking ahead, the city is anticipating a $10 million budget shortfall for 2013. Quintrall says the business services division's budget is expected to be $109 million, down from the $123.8 million level in 2012. She adds, however, that the number includes the winding down of street-bond work, and that bond money made up a significant chunk of the division's 2012 budget. Consequently, the decline in funding won't be as precipitous as those figures might suggest, she says.

The division has opted not to fill 17 positions that have been vacated this year. Of those, seven are in planning, six are in streets, and four are in engineering. Quintrall says she's not anticipating any job cuts within the division during the upcoming budgeting session, though that could change.

During the budgeting process this year, Quintrall says, each department is receiving performance goals.

For example, the city uses street bonds to repair its roads, but it doesn't have a dedicated source for street maintenance, which she likens to having money to buy a new car but not having the funds to change its oil.

She says one of her own performance goals in the upcoming year is to come up with a strategy to fund street maintenance.

The consequences of not meeting performance goals will be similar to those one might find in the private sector, she says.

"Just like in the real world, if my division fails miserably, the mayor needs to make a change in leadership," Quintrall says.