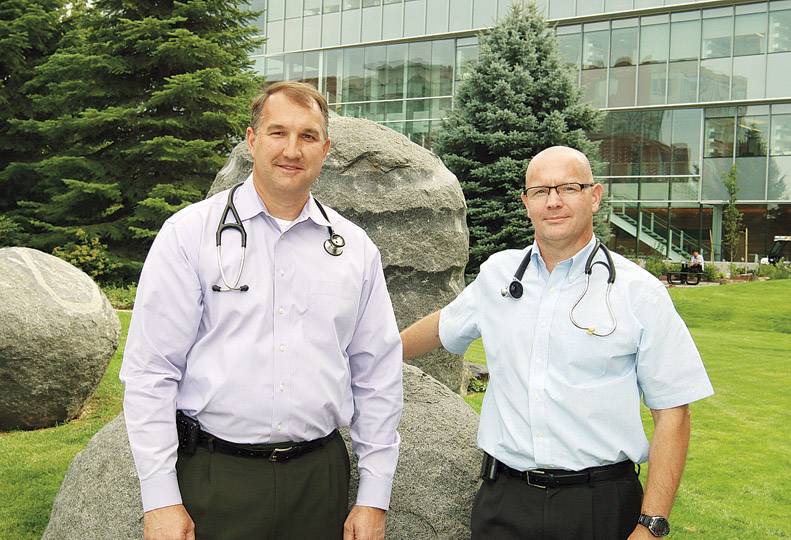 The Washington Alliance of Teaching Physicians is stepping up its efforts to support a fully accredited medical school in Spokane, say Spokane physicians Jeremy Graham and Henry Mroch, spokesmen for the ad hoc group.

Representatives of ATP, which is made up of a few dozen, mostly Spokane-area physicians, have been meeting with legislators sporadically and now want to bring their message to Gov. Jay Inslee.

“We’re clinical doctors, not activists,” says Graham. “We’ve been meeting with legislators. We have an effort under way now to urge the governor to meet with us. We perceive the governor, like a lot of legislators, doesn’t have information about what’s available or not available in Spokane without a real medical school here.”

ATP also supports efforts of Greater Spokane Incorporated to create awareness that the need for a second medical school in Washington state rises above the debate over whether Pullman-based Washington State University, or Seattle-based University of Washington would run it.

Most importantly, Graham and Mroch say, a second medical school is needed here to address a physician shortage in most counties throughout the state.

“The physician shortage is real. It’s something that’s happening, not something that might happen,” Mroch says, adding that nearly half of the counties in the state have only one doctor per 1,000 population, while the national average is around 2.7 doctors per 1,000.

“Central and Eastern Washington are especially underserved,” he says.

“The best partner to make that happen is a new fully accredited medical school,” he says.

WWAMI—which stands for Washington, Wyoming, Alaska, Montana, and Idaho—doesn’t contribute what a full medical school brings to the economy, he contends.

“The average medical school is a $730 million yearly economic engine,” he says. “No WAMMI site does that.”

Graham and Mroch, like most ATP members, have teaching positions with WWAMI or WSU Spokane, or both.

Mroch says one common misconception is that UW, through its WWAMI program, already has a medical school campus in Spokane.

The WWAMI program here, however, isn’t a medical school by itself.

“WWAMI sites are in areas where students can train,” Mroch says. “There’s a big difference in having a teaching site and a full-fledged medical school.”

WSU, on the other hand, has based its pharmacy and nursing schools on the Riverpoint Campus and is developing the basic science, clinical science, and other academic programs that interplay with each other, all of which would complement a medical school, he says.

“A medical school campus is the nucleus for establishing more graduate medical residency programs in other specialties, such as obstetrics, general surgery, and pediatrics, which aren’t in place here,” Mroch says.

Residency positions here mostly are limited to family and internal medicine, he says.

Although it would take legislative approval to appropriate funding for a second medical school, Mroch says, “The biggest obstacle in establishing a medical school here appears to be a desire on the part of UW to maintain whatever activities are taking place in our community.” Keeping the status quo, however, only exacerbates the physician shortage, he says.

Politics and turf wars aside, Washington state isn’t training enough physicians compared with other states and is turning away quality students to medical schools around the country, Mroch says.

“It’s important for WSU and UW to make compelling cases for how this can be addressed,” he says. “We’re not trying to downplay the University of Washington. I trained there. It’s a tremendous academic institution.”

He adds, however, “The University of Washington has chosen not to have two medical schools.”

The UW School of Medicine offers 120 seats for in-state students annually. That’s less than a third of the national average per state, Graham says.

“In Washington, we send away about twice as many students per year to great schools than we can provide seats for in our own state,” he says, adding that most of those students don’t return to Washington state to practice medicine.

“There’s a ton of fantastic applicants waiting to fill new seats,” he says.

The starting class of a new medical school here likely would be similar in size to the 40-student class of first-year medical students currently based here through UW’s WWAMI program, and grow to 120 or more students per year within a couple of years, Graham says.

While the ATP is awaiting the imminent release of a feasibility study that WSU is conducting regarding a potential medical school here, Mroch says WSU Spokane has the necessary facilities on the Riverpoint Campus.

“The bricks and mortar are already in place,” he says.

Spokane also is home to a robust clinical faculty, Mroch says. “WSU Spokane has grown to be a research powerhouse capable of holding a medical school.”

“Modern medical colleges come into existence based on community education model,” he says. “They teach in existing community hospitals that are already there.”

Many medical schools in other parts of the country don’t have 1,000 teaching beds, such as is available at Spokane’s major hospitals, Mroch says.

Graham adds, “We’re fully in favor of what WSU is putting forward. It clearly meets the needs of what teaching physicians are talking about.”