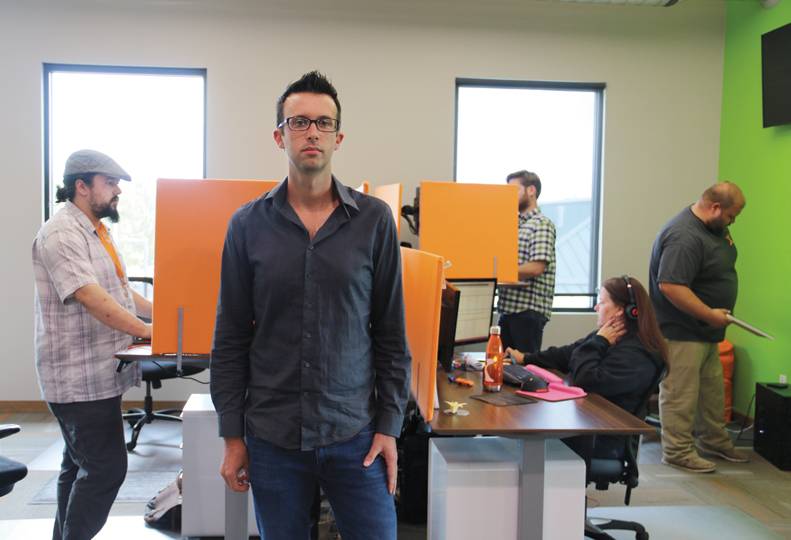 With a population of just more than 2,000, the small northeast Washington town of Newport might not seem like an obvious place for the headquarters of a flourishing information technology management, cloud security, and consulting company.

But Exbabylon IT Solutions owner Alex Stanton says Newport is the perfect place for the growing managed service provider to serve clients who are located anywhere from the Cascade Mountains to the west to the eastern edge of the Idaho panhandle.

Exbabylon IT Solutions, a registered trade name of Exbabylon LLC, was established in Newport in 2001 as a software and web development company. Stanton owns the company with his wife, Tina.

The company grew slowly but steadily for several years, picking up clients throughout Washington and North Idaho, Stanton says. About five years ago, however, Exbabylon took part in a program through the Idaho Department of Commerce called Economic Gardening that Stanton says dramatically impacted the company for the better.

“It’s probably what teed us up for the growth that we’ve seen,” Stanton says. “They brought in a bunch of consultants and they tore Exbabylon apart. They said, ‘How can we make this company better? How do we grow? How do we add jobs?’”

Exbabylon’s annual revenue has grown by 90% in the past three years, to $3.8 million, according to weekly business magazine Inc. Exbabylon ranked No. 3,755 on this year’s Inc. 5000 list, which ranks companies according to the rate of annual revenue growth during a set three-year period.

When Exbabylon took part in the Economic Gardening program, the company had six employees. Now, it has 26 employees, six of whom are located at Exbabylon’s North Idaho office, in Hayden.

The company has seen so much success in Idaho that Stanton says Exbabylon will close its Seattle office this year in order to devote more time and attention to Idaho-based clients.

“We want to stay right in the Spokane-Coeur d’Alene bubble, plus or minus 100 miles,” Stanton says. “We really want to focus on this region and take good care of the customers that are here. From a growth standpoint, we’re going to continue investing in North Idaho — especially the Sandpoint market, which is really underserved.”

Stanton says much of Exbabylon’s growth has come from serving companies that have fewer than 500 employees.

“There’s a gap of resources available to those, and oftentimes they have a small IT staff that doesn’t have experience, especially in modern cloud or cyber security,” Stanton says.

Most managed service providers, Stanton says, seek to take over a client’s IT department, displacing internal IT employees.

“But we’ve gotten really good at taking that midsized customer and really shoring up and helping their IT department, taking on chief information officer roles, and assisting the organization in strategic planning, while still propping up and supporting that in-house shop,” Stanton says. “We fill in the gaps wherever they’re missing capabilities. It’s been a huge reason for our growth.”

“There’s no middleman between Exbabylon and Microsoft,” Stanton says of the partnership. “We’re a siloed team; we only work in the Microsoft cloud. That’s really allowed us to focus our energy. That’s also allowed us to maintain a direct partnership with Microsoft.”

Stanton says Microsoft won’t reveal how many direct partners are in Eastern Washington, but he surmises Exbabylon is one of three in the area.

Exbabylon also has invested more deeply into its partnership with Apple, he says.

Both Apple and Microsoft have been supportive of Exbabylon’s relationship with each company, he says.

“We don’t care what the device is — we secure it, we support it, and we get you to work,” Stanton says. “I think having those capabilities in one team has been the biggest reason for the growth.”

“Often, what we’re looking for are people who are really going to be focused on the customer, and then have the capacity to learn the technology,” Stanton says. “That tends to be more important, because the data is changing so often that if you have 10 years of experience, it may not even matter.”

Exbabylon also has diversified its services in other ways. The Newport location is an authorized Verizon Wireless retailer, as well as a device repair shop. From both Exbabylon’s Newport and Hayden locations, Newport Alarm & Security provides physical security services, such as camera surveillance.

Exbabylon bought Newport Alarm about five years ago, Stanton says, and Exbabylon’s digital security has provided Newport Alarm with an uncommon advantage: the ability to secure products considered to be part of the internet of things.

In general, the internet of things refers to everyday devices with internet-enabled computing technology embedded in them. It can include everything from smart home thermostats to internet-ready refrigerators.

Before the advent of IoT, Stanton says physical security and IT were totally separate entities within a company. Now, however, building access is increasingly dependent on IT systems.

“You might be working with Exbabylon on a cloud migration project and a door access control or a surveillance system all at the same time,” Stanton says. “When a problem happens with your security cameras, you put in a support ticket with Exbabylon, and it doesn’t matter whether it’s network-related or camera-related or software-related, we have a unified approach — and it’s really starting to pay off.”

As talk of an impending economic slowdown has begun to increase, Stanton says Exbabylon is keeping a close eye on aerospace and manufacturing clients that could be affected negatively by a downturn. Many of Exbabylon’s clients are companies in those industries.

“We have (clients in) health care, which is basically recession-proof, and we have a mix of manufacturers that won’t be affected by a downturn, but our aerospace clients and those in various sophisticated manufacturing could see some impacts,” Stanton says.