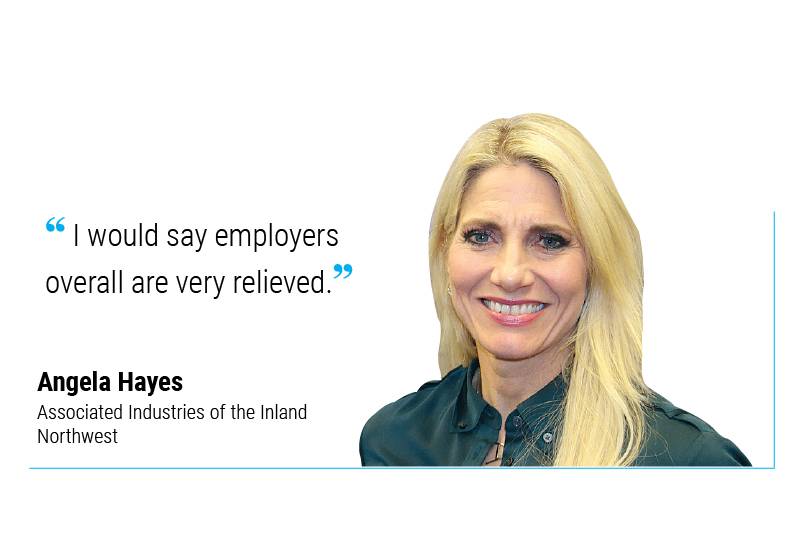 “If you have (former) employees who are now going back to regular unemployment, you are going to see this cost go up,” Demerice says.

The cost he is referring to are the taxes employers pay because of those who were previously laid off from their jobs. In Washington state, an individual must have worked 680 hours in four of the last five quarters to be eligible for state unemployment benefits.

Derek Baziotis, Spokane chairman for the Washington Hospitality Association and owner of Bene’s restaurant at 24 W. First in Cheney, says the cumulative effects of the pandemic remain far reaching.

“This is a perfect example of death by a thousand paper cuts,” Baziotis says. “If you’re barely getting by and then have to take on a tax increase for unemployment insurance, it could be spell the end for some.”

“An increase in minimum wage, a plastic bag bill, vaccines. ... It’s a challenge,” he says.

Workers once eligible for Pandemic Unemployment Assistance aren’t eligible for traditional unemployment insurance. Typically, they are self-employed or independent contractors, he says.

“That provided additional weeks so you could continue to claim,” he says.

Also made available earlier, and now expired, was Federal Pandemic Unemployment Compensation, which at the outset of the pandemic was an additional $600 per week benefit in addition to the base benefit for people who lost their jobs because of the pandemic.

“That went away for about five months in the middle of last year, but then it came back in January 2021 at $300 per week,” he says.

Taxable employers collect and remit a tax every quarter and report the wages and taxes for each employee, he says.

“If they have to separate employees who ultimately qualify for benefits, their rates go up,” he says. “The more they use it, the higher the rate they pay.”

Demerice says the return of students to in-person learning can no longer be cited by parents as a reason not to return to work.

“You have to be able and available to accept suitable work,” he says. “That’s a fundamental principle of unemployment insurance.”

As of this week, if a former employee were to deny their previous employers request for them to return to work, the employer can report them to ESD, which would then suspend benefits, he says.

“This will be tricky for some folks, particularly as we hear about child care slots, or folks who are immunocompromised,” Demerice says. “There are going to be unique cases as people move in and out of the system.”

Though any potential cost increase in unemployment insurance to employers remains to be seen, employers are hopeful the end of federal pandemic relief will encourage many to return to work, says Angela Hayes, senior legal counsel with Associated Industries of the Inland Northwest.

“We’ve heard anecdotally from employers trying to call employees back to work, but they wouldn’t return, often due to fear of COVID or making more money collecting unemployment benefits,” says Hayes.

“I would say employers overall are very relieved—or heartened—to see that there may be now some additional motivating factors for former employees to return to the workplace,” she says. “It’s been very tough on employers.”

However, Hayes says the issue of the COVID-19 vaccine is on the minds of employers. Washington Gov. Jay Inslee has mandated that all state employees must be fully vaccinated by Oct. 18.

“Either from the state, or employers who have chosen to implement a vaccine mandate, without a medical or religious exemption, will those people (who choose to remain unvaccinated) qualify for unemployment benefits?” Hayes says. “More than anything else, that’s the topic we’ve been getting the most questions about.”

Demerice says there’s no clear-cut answer to that question.

“The answer unfortunately is that it depends,” he says. “There would be an investigation into what accommodations and exemptions were allowed and provided for employees.”

However, Demerice says, “For somebody who was separated, assuming that their employer acted in good faith and provided appropriate exemptions, it would be difficult for that person to receive unemployment insurance.”

Doug Tweedy, the Spokane-based regional labor economist with ESD, says he expects a lot of people who had been collecting federal pandemic assistance to return to their former employers.

“That’s helpful because there’s been a real shortage in leisure and hospitality,” he says of those two sectors.

Despite frustrations many employers expressed in recent months about challenges filling positions, Tweedy says the Spokane County workforce has returned to about pre-pandemic levels.

“We’ve increased (jobs) over the same time in 2019, which was a record employment year,” Tweedy says. “Employers are creating jobs and there are opportunities out there in a variety of industries.”

Adds Tweedy, “These laid-off workers are going to have opportunities in a variety of industries.”