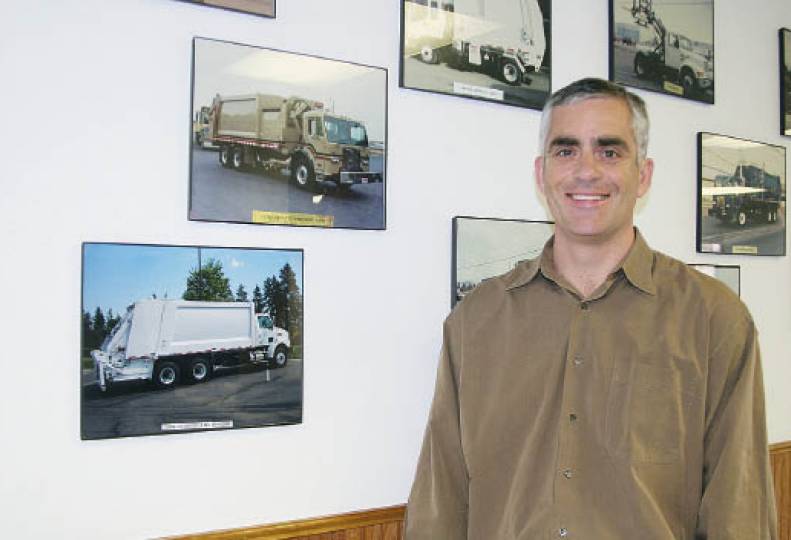 Mark Choate knows more about garbage than most of us would care to think about, which stands to reason given that his Spokane Valley company, Western Systems & Fabrication Inc., has grown from a garbage-bin maker to a vendor of a wide range of refuse-industry equipment.

Western Systems, which mostly serves municipalities, private garbage haulers, and recyclers, recently bought a new, larger facility and hired four additional workers—giving it a total of 27—to keep up with growth, and it plans to hire eight more people this summer, says Choate.

"We've really built our business on garbage," says Choate, who owns the 31-year-old company with his wife, Adrienne.

The company is projecting 2010 sales of $12 million, which would be twice as much revenue as it had three years ago. Soon, he says, Western Systems will become a vendor for a line of recycling and refuse balers made by a division of Vernon, Ala.-based Marathon Equipment Co., a move Choate says could boost the company's revenues by another $2 million over the next 18 months.

Three of the eight new hires the company expects to add this year would be brought on as a result of that new line, while another three would work in its manufacturing division, and two others would be in general sales, Choate says.

Western Systems manufactures steel garbage containers of various sizes used outdoors by businesses or municipalities to haul trash or recycled items, and also sells a number of refuse- and recycling-related product lines made by other companies, including garbage truck bodies, plastic recycling bins, and street sweepers.

The company needed its new quarters, a 40,000-square-foot structure at 911 N. Thierman that it bought recently for $1.75 million, because it has outgrown its 12,000-square-foot leased quarters at 2403 N. University, Choate says. He says the new facility will enable Western Systems to expand its manufacturing area, as well as a department where it refurbishes garbage trucks and garbage containers.

Currently, Western Systems manufactures about 2,000 metal refuse containers each year. They range in size from one cubic yard in capacity, or about the size of a kitchen table, up to 40 cubic yards, which are about 24 feet long and hauled on flatbed trucks. It sells the containers, which range in price from $400 to $5,000, directly to customers in about 40 states. The sizes and dimensions of the containers are fairly standardized, so that they can be dumped or hauled away by garbage trucks made by various truck makers, but Western Systems customizes the paint jobs, lids, or other features as requested by its customers, Choate says.

"Everyone has their own unique touch on it," he says.

In addition to manufacturing, Western Systems distributes and services other garbage- and recycling-related products, including garbage truck bodies made by Heil Environmental, in Fort Payne, Ala., which is a subsidiary of New York-based Dover Corp.

The refuse truck bodies are manufactured at Heil's production facility in Alabama, where they also are connected to a chassis—which includes the cab, motor, and rails for the truck—that the customer has purchased separately. The trucks are shipped from the factory to Western Systems, where they are inspected and sometimes further customized, before Western Systems delivers them to customers.

A small rear-loading garbage truck body can cost around $50,000, while more elaborate bodies can cost up to $180,000, Choate says.

Choate says Western Systems' salespeople work carefully with municipalities and their refuse department managers, drivers, and mechanics to ensure that each customer gets a truck that will work well for its needs.

"There are pages and pages of options" for the trucks, he says, including different types of container grabbers, different types of joystick controls, and so on. He says Western Systems helps its customers write specifications for the equipment they need.

"Every garbage truck that goes out of here is custom," he says.

Refurbishing is a big part of the company's business, Choate says. He says for about half the cost of a new container, the company can refurbish a container and extend its life to about 80 percent of the lifespan a new container would have, saving operators money.

Western Systems has expanded its product lines and territories over the years. Originally, it sold equipment only in Eastern Washington, but it now also sells equipment throughout Western Washington, Oregon, and Idaho. It recently opened a sales office in Clackamas, Ore., where five of its salespeople are based.

Choate says the company has expanded largely by adding more sales territory if other dealers leave the market or if a company approaches it to take over a sales territory.

"It's certainly easier to add territory for what you're already selling," than to add new product lines, Choate says. There are only so many buyers of garbage trucks and metal containers in any given area, he says.

In the tri-state area that Western Systems serves, for example, there are about 400 municipalities and private users of its products. Choate says Western Systems controls most of the market share for the products it sells in its coverage area.

Western Systems was acquired in the early 1980s by Choate's father-in-law, Michael Torre, to complement his refuse-hauling businesses, which include Spokane Valley-based Sunshine Disposal Inc. At the time, all of Western Systems' revenues were from sales of the garbage containers it manufactures. Now only about 20 percent of its revenues come from manufacturing, and the rest from sales, maintenance, and refurbishing, Choate says.

Choate began working for the company after he graduated from the University of Arizona in 1990, and he and his wife bought Western Systems from his father-in-law in 1997. The Choates' extended family still owns and operates Sunshine Disposal, as well as several refuse-hauling ventures on the west side of Washington state.

Choate says Western Systems aims to add only products that complement what the company already sells. It only distributes a single line for each type of product, and seeks to sell the highest quality product lines, even if they are more expensive than others, he says.

"We want to sell the Cadillacs" of refuse equipment, he says.

Western Systems recently launched a street division, in which it sells and services a line of street sweepers and a line of sewer cleaning equipment, as well as robotic camera equipment used by municipalities, including the city of Spokane, to check small sewer pipes for leaks or obstructions.

Choate says it was a stretch to add the street division, but it appears to be a good fit so far, since the company's clients are largely municipalities, which need both types of equipment.

"Once you're visiting a city's offices, it's easy to go from the solid waste department over to the street department," he says.

Choate says he's excited about the company's growth, but cautious about growing too fast.

"We try to manage the growth, and take baby steps," he says.