Quarterly revenue is up despite slow electric unit 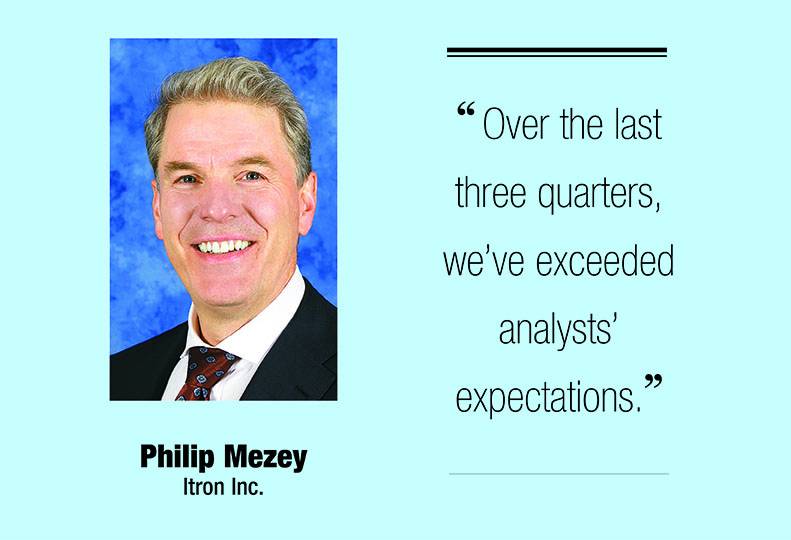 Mezey says the gas and water segments have performed well, and its performance in the electricity segment, down 14 percent in the second quarter, will improve as the company reduces exposure to low-margin business and focuses on lowering costs and capital expenditures.

Once a small concern based in a Hauser Lake, Idaho, garage, Itron now provides products and services assisting utilities with the collection, management, and analysis of information received from electricity, water and gas meters.

The company reported second quarter revenues of $489 million, up slightly from $482 million for the same quarter in 2013. For the first six months of 2014, revenues were $964 million compared with $930 million for the year-earlier period.

In 2013, the company announced it would restructure and lay off 750 people or 9 percent of its workforce, ostensibly saving about $30 million as a result. Today, Mezey says the company is 75 percent complete with workforce reductions, with the remaining cutbacks to occur in European markets.  He says it expects to be substantially complete with the restructuring by next year.

“We are making good progress and the savings to date are contributing to the steady improvement we have seen in gross margin,” he says.

Mezey says the company has come through a couple of tough years with a downturn in the North American market and has returned to strong growth.

“Over the last three quarters, we’ve exceeded analysts’ expectations,” Mezey says. “We are feeling good about our future prospects.”

Mezey says the improvements in gas and water segment performance, up 13 percent and 14 percent, respectively, more than offset the decline in the company’s electric segment.

Itron is aggressively addressing the challenging environment in the electric portion of its business with long-term sustainable cost reductions, he asserts. It has closed electric product factories in Brazil and Saudi Arabia and has plans to cut another $40 million in costs from that segment’s budget.

The company has been awarded more than $1 billion in large, multiyear smart grid electricity contracts, he says.

It has an agreement with the city of Los Angeles to supply electric cellular meters. Also, it has inked a contract with Duke Energy, a Charlotte, N.C.-based electric and gas company whose operations serve 7.2 million U.S. customers in the Southeast and Midwest, to support its electric grid modernization projects.

Companywide, Itron continues to focus on smart-grid alternatives for both public and private networks, Mezey says. It recently established a global business services center in Cork, Ireland, which consolidates its finance, accounting and other previously decentralized activities in Europe, Africa and the Middle East

The public-private partnership is the first instance worldwide Mezey contends, in which two utilities are cooperating to share a communications network where a city’s meter system is being managed by a private company, Mezey says. Bismarck will use Itron’s advanced metering infrastructure technology along with Itron analytics to improve operational efficiencies and streamline meter reading, he says.

Mezey has been with the company since 2003, when he was hired as managing director of software development for Itron’s energy management solutions group.

He is successor to longtime President and CEO LeRoy Nosbaum. Nosbaum ran Itron twice, retiring in 2010 and returning in 2011, overseeing the company until 2012 when he retired permanently. Malcom Unsworth was president and CEO from 2010 to 2011.

Itron grew from its roots in Hauser Lake in 1976 after several engineers, looking for better, more efficient ways to read utility meters, hatched an idea for a product.

Those six engineers and that product were the genesis of Itron. Later, with seed money from what was Washington Water Power Co. at the time, now Avista Corp., they invented a handheld device that enabled employees to walk by a residential utility meter and pick up the signal of the radio chip stored inside the meter. It was the beginning of today’s communication modules.

Remote meters meant workers no longer had to enter private property with all the risks that entailed, and lowered operational costs as well.

During the past 18 years, through mergers and acquisitions of companies such as Luxembourg-based Actaris Metering Systems, and SmartSynch Inc., a Jackson, Miss.-based company it acquired in 2012, strengthened its integrated cellular communications offerings.

Itron does make devices that automate meter reading, but meter readers themselves are a small part of what Itron does these days, she says.

“In the future the focus is to keep building on software and services. It’s an opportunity to grow in electricity gas and water on top of a smarter future … connectivity, networking and the Internet of Things (IoT) revolution in terms of communities,” Moore says.

The Internet of Things refers to the interconnection of uniquely identifiable embedded computing-like devices with the existing Internet infrastructure.

Energy and water infrastructure will require an investment of about $24 trillion by 2030, she contends.

Itron can also help utilities discover when and where theft is occurring as well as identify predictive maintenance—anticipating where and when a problem will occur within a system, she says.

Mezey says there is untapped potential for the company worldwide.

“In the water business … 30 percent of water users are unmetered. Ireland was one of those countries,” he says.

“Africa is a really interesting opportunity for us in terms of expanding electricity to Africa. On the gas side, Bolivia also has tapped into gas supplies for the first time and put in a distribution system. So that opened up new markets,” he says. “There are gas lines in the former Soviet republics, Mexico is a great gas opportunity for us, pipelines are being extended and gas is being discovered and exploited (worldwide),” he says.

Itron announced in April that Steven Helmbrecht, Spokane-based executive vice present and chief financial officer, will leave the company effective Dec. 31. The company is currently searching for external candidates to fill the position.