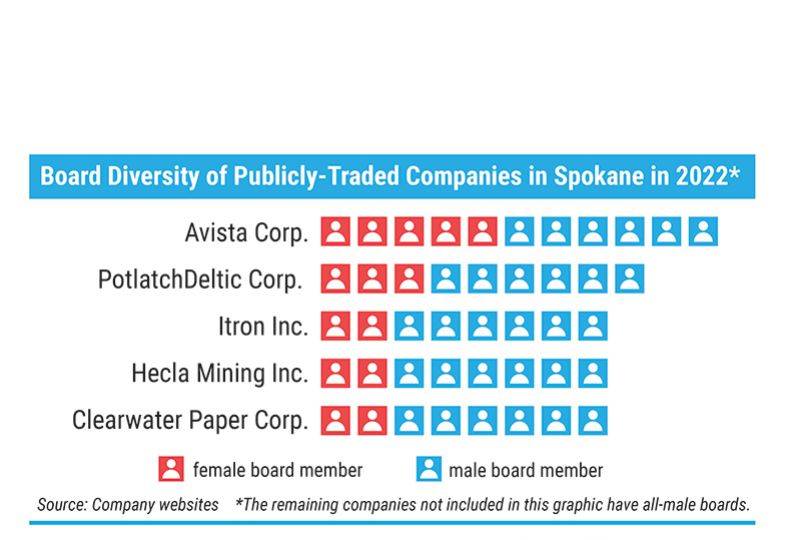 Depending on the company, board diversity isn’t only about a mix of genders though. Companies measure diversity in a variety of ways, including ethnicity, age, skills, and experience.

Corporate secretaries from three companies here say they all value a diverse board of directors and while gender is a valuable characteristic, diversity in experience and skills are most important for the successful performance of a board.

Clearwater Paper Corp., a Spokane-based paper manufacturer, has two women board members, Ann Nelson and Christine Vickers Tucker, who serve along with six men. Clearwater also has one member who is African American, Joe Laymon.

Michael Gadd, senior vice president and corporate secretary for Spokane-based paper manufacturer Clearwater Paper Corp., says, “Companies perform better if they have some gender diversity on the board, but for our company, it’s certainly valued and of value.”

Nelson is a retired partner from KPMG LLP, an accounting firm, and Gadd says the type of financial experience that she brings is highly sought after for public companies.

Vickers Tucker is a recently retired vice president and general manager for Clorox Professional Products Co., and Gadd says her leadership and marketing experience improves the board’s performance as well.

Gadd says Clearwater’s first two female board members joined within the last nine years: Linda Massman, former CEO, and Beth Ford, former board chair, both of whom joined in 2013. Clearwater Paper Corp. was established in 2008 after Potlatch Corp. spun off its manufacturing assets from its land holdings, according to the company website.

“While we do not have a formal policy or requirement with respect to director diversity, we value members who represent diverse backgrounds and viewpoints and strive toward a board composition that encompasses such diversity,” Gadd says. “Diversity for us has been focused on experience, both professional and life experience.”

Chris Ware, corporate secretary and vice president of legal at Liberty Lake-based Itron Inc., says two of the company’s eight directors are women, making up 25% of the board.

Itron also has one member who is Hispanic, Santiago Perez, Ware says.

Ware explains that Itron’s women directors have a wealth of executive experience that contribute to business development and the successful performance of the board.

Ware says, “Diversity of gender and ethnicity are both critical priorities, but the priority for Itron is to have the best board of directors possible with the skill sets we look for.”

He adds, “But diversity is a concern and something we consider as we collect candidates for board openings.”

Ware says Itron finds candidates for succession planning through networks and organizations that promote individuals for board positions.

Greg Hesler, vice president and corporate secretary at Avista Corp., says the company was honored to be recognized for having a gender-balanced board recently.

In May, nonprofit 50/50 Women on Boards, recognized the utility company because women hold 45%— five of 11—of Avista’s board positions.

Hesler says Avista’s corporate board also has two members who are racial minorities: Sena Kwawu, who is Black, and Rebecca Klein, who is Latina.

The women’s long tenure demonstrates that gender diversity has been a focus for many years now, he says.

“We’ve had female representation on the board going back to 1978,” Hesler says. “There was a gap between 1988 to 1997, but other than that, we’ve had consistency going back that far.”

Blake is the chair of the Governance and Corporate Responsibility Committee and lead independent director and has provided direction to advance diversity on Avista’s board.

He adds that the company’s Governance and Corporate Responsibility Committee’s strategy is to recruit diverse individuals to serve on its board by maintaining a diverse pool of candidates and to select potential directors when an opening becomes available.

“Our philosophy is that we maintain a diverse candidate pool and from there we make sure we pick the very best, most qualified candidate that we can,” Hesler says.

Avista maintains and tracks candidates in the pool with a skills matrix and looks for a variety of skills including environmental, financial, and legal experience.

“We also really try to have a mix of longer-tenured directors who provide senior leadership at the board level,” Hesler says.

As members leave their positions on the board of directors, Avista looks for replacements with skills similar to those of the outgoing director.

“For example, Rebecca Klein, who’s a lawyer by background, is our one board member with legal experience, so if she were set to retire, then our focus would be to find someone with a legal background,” Hesler says.

Avista, Clearwater, and Itron all say their companies will continue to strive for a diverse board of directors.

Gadd says that the board will look to diversify the skills of its future directors to include environment and social governance experience, which has been a growing priority in recent years.

“I think it’s fair to say for our company and for every company … there’s always an area that’s changing focus for boards to consider. But diversity for the board is a big focus for boards and will continue to be,” says Gadd.