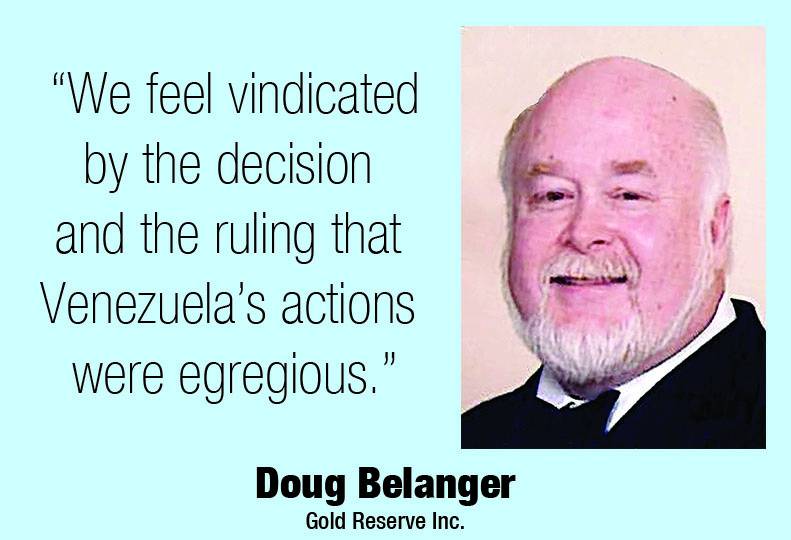 Gold Reserve Inc., the Spokane-based mine-exploration company that sued the Venezuelan government after that country seized the company’s primary mining property, has been awarded $740.3 million in compensation for the loss, says company President Doug Belanger.

The award comes six years after Gold Reserve filed a $2.3 billion claim against Venezuela over the property, which it calls the Brisas Project.

The Tribunal at the World Bank’s International Center for the Settlement of Investment Disputes, or ICSID, handed down the decision on Sept. 22. The three-member international tribunal heard the case in accordance with provisions of the Canada-Venezuela Bilateral Investment Treaty. Gold Reserve is incorporated in Canada but has its executive offices in downtown Spokane.

Gold Reserve’s primary business for more than 16 years has been the Brisas gold-and-copper project in the South American country.

The award represents $713 million for the fair market value of the project, $22.3 million for interest on the award since April 2008, and $5 million for reimbursement of legal and technical costs expended by Gold Reserve, the company says. Payment of the award is payable immediately, according to the decision, with unpaid amounts accruing interest at 2 percent annually.

Belanger says he and the company are happy about the decision after dealing with the case for so many years.

“It’s a very strong decision on the legal question, and the judge agreed with our case,” he says. “While it doesn’t reflect the full value of the Brisas Project, we feel vindicated by the decision and the ruling that Venezuela’s actions were egregious.”

Once the judgment has been collected, the company plans to distribute to shareholders a “substantial majority” of the proceeds, after paying for expenses from the court case.

“It is subject to the need to retain funds for operating and arbitration-related expenses, corporate income taxes and other obligations, such as repayment of convertible notes,” Belanger says. “We will be talking to some of our major shareholders and sit down with our advisers to look at the best way to distribute some of the proceeds to shareholders.”

Belanger says the award compensates Gold Reserve for the original $300 million it spent developing the Brisas project to the construction stage before its termination by Venezuela. The company originally was seeking about $1.928 billion plus interest, or about $2.3 billion in all. Belanger says Gold Reserve has spent at least $22 million in legal fees alone to argue the case.

The company says in a press release that it expects Venezuela to honor its obligations and anticipates prompt payment of the tribunal’s unanimous award.

“As our counsel studies the award, the company plans to reach out to the government of Venezuela to explore ways to facilitate Venezuela’s ability to honor its obligations promptly,” Belanger says in the press release, adding, “We are hopeful that Venezuela will satisfy its obligations to the company without delay and without any further legal proceeding.”

He says Venezuela has a history of meeting its international obligations, and the country has foreign reserves of about $20 billion.

“So they have the ability to pay. If they don’t, there are defined procedures which are immediately enforceable in any of the 150-plus member states party to the New York Convention,” Belanger says, adding that the company is well-financed and has the strong support of its stakeholders to pursue collections if need be.

Despite the lengthy legal battle, and the judgment, Gold Reserve continued to leave the door open to potential future collaboration with the Venezuelan government in completing development of the mine, if the country showed an interest in such an alliance.

“The acquisition of the company’s valuable engineering work product by the Venezuelan government would both expedite and reduce the cost of the project’s development. If requested, Gold Reserve would also be prepared to assist in the fast-track development of the Brisas Project,” the company said in the press release.

Gold Reserve’s common shares now trade in the U.S. through an over-the-counter exchange, OTCQB, under the symbol GDRZ, as well as under the symbol GRZ.V on the TSX Venture Exchange, a Canadian stock exchange for emerging companies.

Its stock ceased being traded on the NYSE Amex LLC stock exchange in March 2013, after appeals submitted to an independent panel to remain on the exchange were denied. The delisting action was an indirect result of the ongoing legal battle the company has been waging with the Venezuelan government over its Brisas Project.