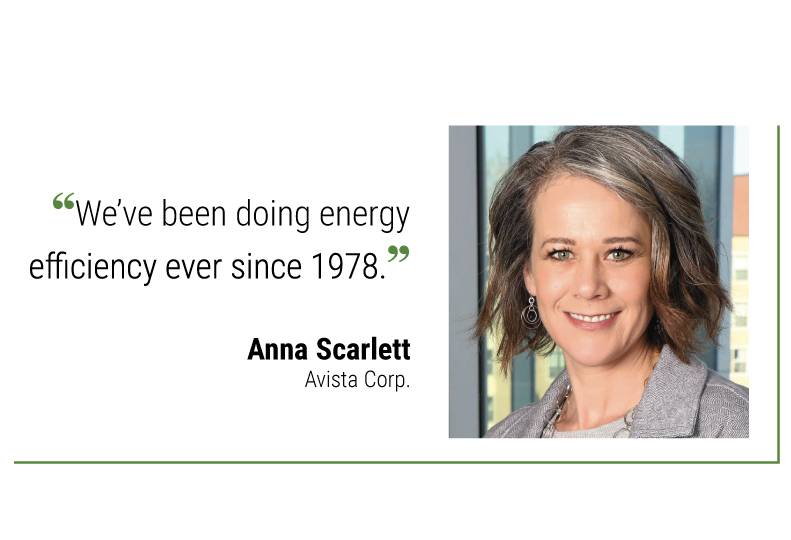 Spokane-based Avista Corp. reported reaching 111% of its conservation goal. The company achieved 99,894 megawatt hours of energy savings in 2018 and 2019. For the two-year period, the company had a conservation target goal of 89,771 MWh entering that two-year span.

According to the U.S. Energy Information Administration, an average home in the U.S. used 10,972 kilowatt hours in 2018. Using that average, Avista’s total energy savings is enough to energize the equivalent of 9,104 homes for a year.

Another Spokane-based utility, Inland Power & Light, an electric cooperative, says it reached 116% of its 2018-2019 energy-conservation goal, achieving savings of 11,415 MWh.

The co-op entered the recently completed two-year time frame with an anticipated energy savings target of 9,811 MWh, according to the Commerce Department report.

For the 2020-2021 cycle, 18 utilities project a total savings of 1.3 MWh for their conservation target, says the Commerce report. The Franklin PUD, in Pasco, Washington, has been added to utilities required to demonstrate compliance with the Energy Independence Act under the current cycle.

For this year and next, Avista has projected a conservation target of 72,844 MWh, or enough to supply about 6,640 homes a year. The 2020-2021 period marks the sixth cycle of conservation programs since the Energy Independence Act’s conservation requirements went into effect.

Anna Scarlett, Avista’s director of energy efficiency, says the lower conservation goal for the current two-year cycle is a result of a variety of factors.

“With recent legislative changes, many of the energy efficiency (incentives) that we have historically offered are now considered to be within energy codes,” Scarlett says.

As an example, LED lighting historically has been a significant area for energy savings. With the recently passed House Bill 1444, it’s now the requirement that all general service lighting in Washington state meet the minimum efficiency standard, she says.

“This is good news for energy efficiency, in general, since customers will use less energy. However, it’s no longer a program that we can offer an incentive for,” she says. “But we can’t count the savings associated with these programs anymore, like LED lighting.”

Still, Scarlett says, the company has exceeded its energy efficiency goals since the Energy Independence Act was implemented.

“We’ve been doing energy efficiency ever since 1978,” she says. “The efforts started with weatherizing homes and wrapping water heaters in the customers’ homes.”

Under the Energy Independence Act, which was established by Washington voters in 2006, each utility must set a two-year target for the amount of energy efficiency it will achieve.

Washington state has approximately 65 total utilities, 17 of which are required by law to follow Energy Independence Act rules because of their size, says Michael Furze, the assistant director of the Commerce department’s energy division.

The conservation targets are based on assessments of potential energy-saving measures that are cost effective and available in the utility’s customer service area, such as installing insulation or replacing inefficient equipment, Furze says.

Separately, the overall amount of renewable energy used by most Washington utilities is greater than 15% due to the requirements of the act, Furze says.

He says the department prefers working with utilities in a “collaborative” fashion in an effort to help them meet their conservation targets.

“When I-937 (Energy Independence Act) passed, there was no off-the-shelf way to capture renewable energy,” he says.

Solar and wind energy, for example, are intermittent resources subject to the inconsistent whims of nature.

“This is a complicated dance that those utilities have to perform each year,” he says.

However, with the help of federal and state assistance, and the utility industry’s investment and development in smart meter reader technology, the state’s largest utilities each year get more well equipped to continue exceeding their conservation goals, Furze says.

In establishing targets and plans for achieving them, each utility consults with Washington state Utilities and Transportation Commission staff, the Attorney General’s Office of Public Counsel, and others.

The UTC is the state agency that regulates private, investor-owned electric and natural gas utilities in Washington.

In May 2019, Washington Gov. Jay Inslee signed into law the Clean Energy Transformation Act, which commits the state to an electricity supply free of greenhouse gas emissions by 2045.