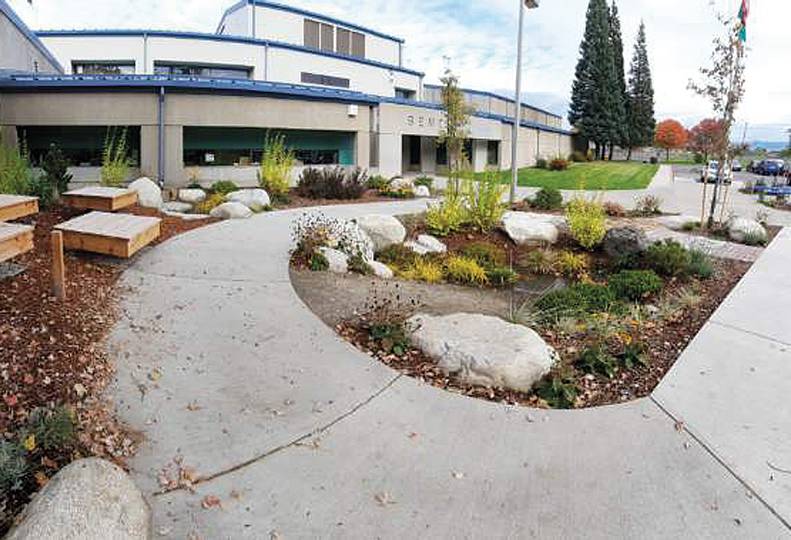 -SPVV Landscape Architects
A xeriscaping approach, with drought-resistant plants, has been used around some Spokane-area schools.

Last month, the U.S. Drought Monitor placed the Spokane area in the most extreme category for drought, called D4 or exceptional drought. As of mid-August, that showed no signs of easing.

“People I meet with are very concerned about the hot summer we’ve had,” Merritt says. “With all the fires going on, I think it’s definitely influencing people’s choices to try to make a difference to change their watering habits and do something to be a little more earth-friendly.”

“Probably 30% of those inquiries are existing homes, folks who want to reduce their water consumption,” Sherry says.

Homeowners in Spokane who participate in SpokaneScape remove at least 300 square feet of turf and replace it with water-efficient plants and mulch. In return, the SpokaneScape program provides a credit of 50 cents per square foot of grass removed, for a total between $150 and $500 toward the homeowner’s city water bill.

Merritt says many people who have a parking strip--the narrow band of space between street and sidewalk, typically filled with turf--in front of their property start out by converting that space to a more drought-tolerant area.

“A lot of people have a hard time putting enough water on that to keep it green,” Merritt says. “That’s the first thing to go, for a lot of people. They tear those out and they put in some bark and lavender and bunch grasses.”

Sherry says those who opt to remove turf and replace it with low-water plants are typically childless.

“It’s not right for everybody,” he says. “I don’t see this kind of landscape type being built a lot for a family with small kids. I see it a lot in older demographics.”

Merritt says that as water prices rise, more homeowners are likely to consider water-saving measures such as removing turf.

In January, the city implemented a new tier structure for residential water use that resulted in a median increase for the customer of about $11 total over three summer months.

According to the city’s website, 90% of customers will have had bills for at least half of this year that are the same or lower than last year, and half of residential customers won’t notice a difference between this year and last in their summer irrigation bills. The new tier structure, however, adds a fifth, higher-cost tier for customers who use more than 21,000 gallons of water in a month.

Merritt says the previous owner of his Spokane home used about 57,600 gallons in July and August to water the lawn. When he bought the property in 2013, he removed 60% of the lawn and installed drought-tolerant plans and raised garden beds, he says.

“We participated in the SpokaneScape program in 2018 and received a $500 credit on our utility bill that helped reimburse us for costs to install a drip irrigation system and purchase drought-tolerant plants,” Merritt says.

Merritt says his property now uses about 8,300 gallons of water for irrigation in July and August.

“They don’t want to spend the money on water anymore, so they want to revisit the landscape,” Sherry says. “A lot of times, you’ve got a landscape that’s visual, it’s a big green lawn that nobody ever sets foot on except to mow it. Why is it there? Do you really need it to be part of your corporate look? Probably not.”

“Let’s put your maintained landscape where you really need it for impact, and the rest of it we’ll convert back to meadow so that it’s getting mowed less,” Sherry says. “We might put a type of grass out there that only needs to be mowed two or three times a year, instead of every seven days.”

Among the public projects SPVV is involved in, schools are a regular source of demand for commercial drought-resistant landscaping, Sherry says.

New schools such as Pauline Flett Middle School, in northwest Spokane, and Carla Peperzak Middle School, currently under construction just south of the Spokane city limits, are examples of a trend that Sherry predicts is going to stick around.

“We’re looking at changing their landscape so that it’s more of a visual space, and we’re cutting down on the maintenance and water application, as a result,” Sherry says. “A lot of those landscapes are going to be native (plants), and as a result, they’ll be faster for the district to maintain, use less water, and still look great.”

Sherry says that with limited grounds maintenance staff and tight budgets, schools are likely to be built with low maintenance and water costs in mind.

Educating grounds staff and landscaping workers on care and maintenance of a low-water landscape is a constant challenge, Sherry says.

“We have to do that over and over again, because of turnover in the landscape industry,” he says. “The landscape guys last about a year at a job, and then they’re off to something else.”

“They’re used to laying sod, putting in edging, putting in plants and trees and rock mulch, and walking away,” he says. “The waterwise landscapes do take a fair amount more attention to detail on the way things are put in.”

Sherry says those who choose to make water conservation a priority must be prepared for the end result.

“Water wise landscapes are much more casual,” he says. “They can be messy; they can be visually cluttered.”

Merritt says that homeowners who go through the SpokaneScape program often start a trend in their neighborhood.

“It travels down the block. You get a lot of other folks on that street who get interested and choose that option,” he says. “It’s catching on that turf lawn isn’t the only acceptable thing to do in front yards anymore, which has been awesome to see the changes in neighborhoods as you drive through and recognize all the projects that have started up over the years.”

However, Sherry notes that not all communities are accepting of nontraditional landscaping.

“If you’re in a homeowner’s association, you may be mandated to have that green lawn,” Sherry says.

Sherry says he often has to manage the expectations of customers who want drought-resistant landscaping, whether commercial or residential.

“They don’t know what they’re asking for, sometimes,” Sherry says. “We need to get them to speed on what it’s going to look like at maturity.”

It’s possible to convert a turf yard into a yard that’s full of drought-tolerant native plants, he says, but the logistics of the process can be difficult.

“To get there can be a little bit of a problem, because if you’ve got an existing home, you may have a lot of mature canopy trees that are used to getting irrigation,” Sherry says. “If you remake it, you could lose those existing trees because they’re used to getting water.”

“We’ll see the way that we design our parks and open spaces reduce or eliminate irrigation water,” he says. “It’s becoming normal across all commercial development. It’s partly driven by LEED standards.”

“We’re going to see more encouragement from the agencies to encourage this kind of landscape--more allowances to adapt existing landscaping,” Sherry says.

Merritt says one challenge facing programs such as SpokaneScape is the lack of workers willing to do the physical labor.