Podium sports facility to be updated for those about to rock 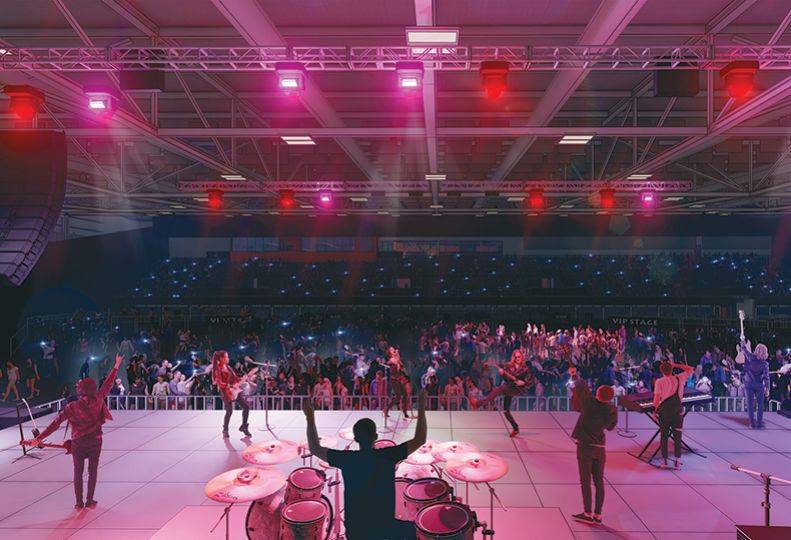 -—Integrus Architecture
Built for tournaments and other sporting events, the Podium is expected to be a “sweet spot” for 3,000 to 5,000-person concerts.

Less than a year after the doors opened at the Podium, the state-of-the-art athletic facility is undergoing a $3.1 million investment that will allow it to be transformed into a concert venue, says Paul Christiansen, director of sports for Spokane Public Facilities District.

The move is intended to provide added flexibility to the buildings that the PFD operates, accommodate midsize gatherings and concerts for which there isn’t an ideal venue in Spokane now, and spur more income generating potential at the sports complex.

The improvements are expected to be completed in time for a debut concert event at the Podium in mid-October, Christiansen says.

It is the newest addition to the PFD, a municipal corporation that also operates the Spokane Veterans Memorial Arena, the Spokane Convention Center, and the First Interstate Center for the Arts.

Located atop a 15-foot basalt outcropping overlooking Riverfront Park and downtown Spokane, the Podium is a 135,000-square-foot facility that has as its main feature a 200-meter, six-lane, hydraulically banked track laid over 75,000 square feet of competition space. Located at 511 W. Dean, the facility also has space for concessions, vendors, management, media, and medical training.

The cost to build the track alone was $4.7 million, says Christiansen. However, track events are only held there during the winter months.

“We needed to do a lot more than that,” says Christiansen of the new investments.

Earlier this year, the Public Facilities District invested $1.1 million on a 2 1/4-inch-thick removable subfloor that covers the entire 75,000 square feet of competition space and protects the oval track from damage. The oval is built on two layers of marine-grade, three-quarter-inch plywood and is unable to withstand heavy machinery used to set up concert events.

While the Podium’s primary focus is on providing a premier indoor track venue, the PFD also is motivated to make the venue more versatile, Christiansen says.

With the removable subfloor, the facility is able to accommodate chairs and stages for public gatherings in addition to concerts.

“Without a subfloor, it was going to be limiting what we can do,” he says.

The next investment—to the tune of $2 million—will be a series of sound curtains and acoustical panels along the perimeter wall and on the ceiling. The sound curtains will further enhance the space as a concert venue by reducing the size of the event floor and creating a funnel to the main stage, says Christiansen.

A truss system also will be added to accommodate lighting and production.

The Podium will go offline in early July for installation of the acoustic and production features.

As a concert venue, the Podium will provide the PFD a “sweet spot” for general admission audience capacity of 3,000 to 5,000, Christiansen says.

In addition, while the Podium was in pandemic-induced lockdown, the first investment the PFD made was to install a $750,000 sprinkler system that brings the Podium into code for public assemblies. The sprinkler system wasn’t required for sporting events.

Matt Meyer, PFD director of entertainment, says he has about four concerts scheduled for the Podium in October and early November. He adds that being able to bring the Podium online creates a landing pad for mid-tier artists, such as electronic dance music bands and underground rock bands, that usually skip over Spokane. Meyer declines to identify the artists who have been booked so far, as they haven’t been announced officially.

With the right venue, Spokane is a natural stop for these bands on tour that are driving up from Boise, Idaho, then heading west to Seattle, or vice versa, says Christiansen.

Meyer explains that these mid-tier artists typically would be offered the Star Theater venue, which has a capacity of 5,900. However, because some artists prefer to play to a standing general admission audience in front of the stage, they choose to not stop in Lilac City at all.

The Star Theater venue is configuration of Spokane Veterans Memorial Arena that has a smaller seating area for more intimate shows than a full arena event. However, Star Theater’s seating in front of the stage takes away from a dance party feel that some artists prefer.

Meyer says he’s been reaching out to agents and showing them the new venue, and he’s received encouraging comments about it.

The investment in the subfloor is already paying off, as six public high schools that previously held graduation at the arena or the First Interstate Center for the Arts will hold graduations at the Podium for the first time this year.

The Spokane Arena has a 12,000-person capacity, whereas most high school graduations have about 4,000 to 6,000 in attendance, says Christiansen.

He explains that the idea was to free up dates that the arena could hold concerts and generate more income by moving graduations to the Podium.

“The model has always been that the arena has to do well in order to cover the losses of the other buildings that the PFD operates,” says Christiansen, adding that when the organization hosts graduations at the Spokane Arena, it’s “giving it away for free.”

Christiansen says that when the Podium was built, it was projected to lose $250,000 to $400,000 a year, and the PFD set aside $750,000 to cover some losses for the first five years. However, with the onset of the pandemic, the PFD had to delay opening the Podium for two years during which it dipped into those reserves.

“That money doesn’t exist anymore, so now how can we make it break even?” he says, “Can we take this thing out of its wheelhouse and do concerts?”

He estimates that scheduling six to eight concerts a year in the Podium will help it break even.

Christiansen and his colleagues researched similar structures around the world, and they found nobody was laying down a complete subfloor to make use of the entire competition space.

“The whole idea is maximizing that space out there for volleyball, in particular because of the economic impact that some of those volleyball tournaments bring to Spokane,” says Christiansen. “We couldn’t get away with doing only six or nine mats.”

The subfloor was supplied by London-based Terrellas Plc., which specializes in outdoor artificial turf products.

“This is the first time this product has been laid down into an indoor format versus a football field,” says Christiansen.

In addition to volleyball tournaments, the Podium will have the ability to accommodate nine basketball courts and 21 wrestling mats.

Christiansen says the PFD originally decided to build an indoor track facility, because indoor track has a defined season from December to March, which traditionally has been the offseason for Spokane-area hotels.

Christiansen says he’s heard positive comments from the hoteliers, and that the DoubleTree by Hilton Spokane City Center hotel reported its highest January occupancy in its history.

The Podium hosted three events in January and plans to double that in the future, he adds.

Another source of income arose from a recent NCAA ruling that requires athletes to clock time on a banked track, like the one at the Podium, in order to qualify for nationals, says Christiansen.

“Colleges will come and stay for four to five days in a hotel and use our track,” he says.

There are only 12 facilities with a hydraulically banked tracked in the country, and the Podium is the only one west of the Mississippi River, says Christiansen.