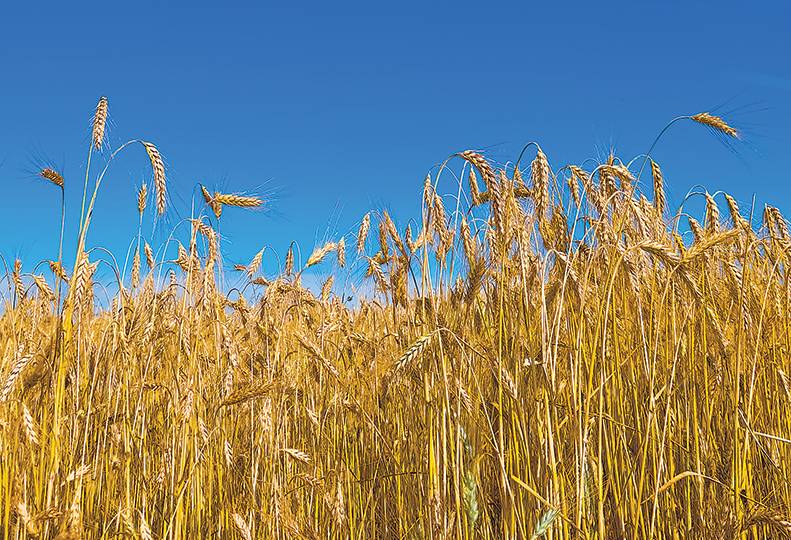 Glen Squires, CEO of the Spokane-based Washington Grain Commission, says wheat futures prices had been rising prior to the conflict due to a drought-related drop in supply, but those prices have continued to rise due to the war.

Wheat prices had been trending slightly higher over the course of 2021. Wheat commodities were priced at $8.10 a bushel in February prior to Russia’s invasion of Ukraine. On Feb. 24, bushel prices increased to $9.15, and then spiked to $12.47 on March 7.

As of April 5, the commodity cash price for soft white wheat was $10.87 a bushel, Squires says. On the Chicago Board of Trade, wheat futures for May remained high at $10.45 a bushel.

“There’s fear that there could be a significant supply shock to global wheat exports, because those two countries account for a material portion of total wheat exports across the globe,” Perry says. “Maybe the Ukrainians aren’t able to harvest their wheat this year.”

According to an American Farm Bureau Report, Russia is the world’s largest exporter of wheat. The country’s 2020-21 exports accounted for 20% of the wheat in the international market, while Ukraine produced 8% of international wheat exports. Canada and the U.S. were the second and third largest exporters, at 14% and 13%, respectively.

The wheat futures market was one of the first markets the war impacted, Perry says. Prices for some types of wheat increased by almost 50% over the course of a couple of weeks, peaking in early March, he says.

“The market has settled down a bit, but still is up about 25% from where it was prior to the Russian army invading Ukraine,” Perry says.

Derek Schafer is president of Homestead Family Grain Co., which includes six family farms in the Ritzville area. Schafer runs his family’s fifth-generation grain farm near Ritzville, about 75 miles southeast of Spokane, where 80% of the farm’s crop is soft white wheat. Soft white wheat is commonly used to make flour for products such as cakes, crackers, cookies, and pastries.

“The futures markets soared by several dollars, but the cash markets stayed the same,” Schafer says. “It’s nice to see prices rise, but if you’re not in a position to actually execute a sale in the futures markets, you really can’t realize that extra profit. The current commodity price would allow us to sell above the cost of production, but I’m worried that it won’t last.”

Perry says some nations will rely on other markets for wheat due to damage to Ukraine’s crops and sanctions against Russia.

According to the Washington state Department of Agriculture, in 2020, wheat was Washington’s third largest export at $663 million, behind fish and frozen French fries. The top buyers of Washington wheat are the Philippines, Yemen, and Japan.

Perry says that while Russian wheat is among the products the U.S. and European Union nations have boycotted through sanctions, other countries are unlikely to stop importing Russian wheat.

“There are certain countries that are still going to buy Russian wheat, and China is certainly one of them,” Perry says.

According to the U.S. Department of Agriculture, China consumed about 19% of the globe’s wheat production in 2020. Wheat flour is a primary ingredient in many staple foods in China, such as noodles, dumplings, and steamed bread.

Washington farmers could see competition from other countries that export wheat, as some nations that have relied on wheat from Ukraine and Russia face shortages.

The USDA’s March 2022 wheat outlook report states that Australia is projected to have a larger crop than expected.

“With substantial disruptions to trade … part of the global demand will be picked up by India and Australia, who have ample tradable supplies and are competitively priced,” the report states.

“One advantage we have is that Washington produces some of the highest quality wheat produced anywhere on the planet. There’s a good demand for our product because of its quality,” Schafer claims.

Squires says Washington also has an advantage in that the state is a stable source of wheat.

“One of our selling points is that we’re a reliable supplier,” Squires says. “Russia sometimes puts restrictions on exports.”

Other countries also likely will step up their wheat production in the wake of lower wheat availability and resulting higher prices in the global market.

“I think everyone underestimates agriculture’s ability to respond to price increases,” Schafer says. “When we see the price go up, we find a way to produce more of it. It’s not just in the United States, but worldwide. When wheat prices are high, people all over the world plant wheat.”

Squires says, however, that with spring wheat already in the ground in Washington, it’s unlikely farmers here will be able to plant additional acres to address an increase in demand.

Schafer says farmers have seen costs for growing—such as prices for fertilizer, herbicides, and fuel—increasing rapidly since before Russia invaded Ukraine. Supply shortages related to the COVID-19 pandemic had increased costs, he says.

Perry says fertilizer costs have increased as a result of sanctions against Russia.

“Russia, in addition to being a significant wheat exporter, is also a significant exporter of different components for fertilizers,” Perry says. “Some of the fertilizer components have gone up more, from a percentage perspective, than the price of wheat.”

Planning for supply shortages and increased prices can be tricky, Schafer says.

“A lot of the crop protection products that we use—herbicides and fungicides—we were able to purchase last year and store them over the winter,” Schafer says. “Fertilizer is an issue, because you can’t store a lot of it, because it takes so much space to store.”

Schafer says the cost of production on his farm has increased by more than $2 per bushel.

“Many of the parts that make up the cost of our production are most likely permanently higher,” he says. “The current commodity price would allow us to sell above the cost of production, but I’m worried that it won’t last.”

Schafer says the worst-case scenario would be one in which he pays a great deal to get a crop planted, only for commodity prices to nosedive.

“It would take a long time for those input costs to come down, so we’d be caught in a situation where we’ve got a really expensive crop planted in the ground, and no good price to sell it at,” Schafer says.

However, Schafer says he doesn’t expect the commodity price for wheat to remain elevated.

“There’s a saying in the commodity market: ‘High prices cure high prices,’” Schafer says. “My hope is that most farmers are in a position to weather another commodity cycle.”

Schafer says Washington’s wheat farmers will experience effects of disruptions by the Russia-Ukraine war for a long time to come.

“That situation will probably be years in length to get resolved and to get their production and export back to where it was. Ukraine’s infrastructure has sustained massive damage. If they don’t have railroads and ports to ship out of, how can they do it? Even if the war were to stop today, it could be years before that can be rebuilt and they can start exporting like they did pre-war.”