Internal hoist could cost $200 million, would boost production by 60 percent 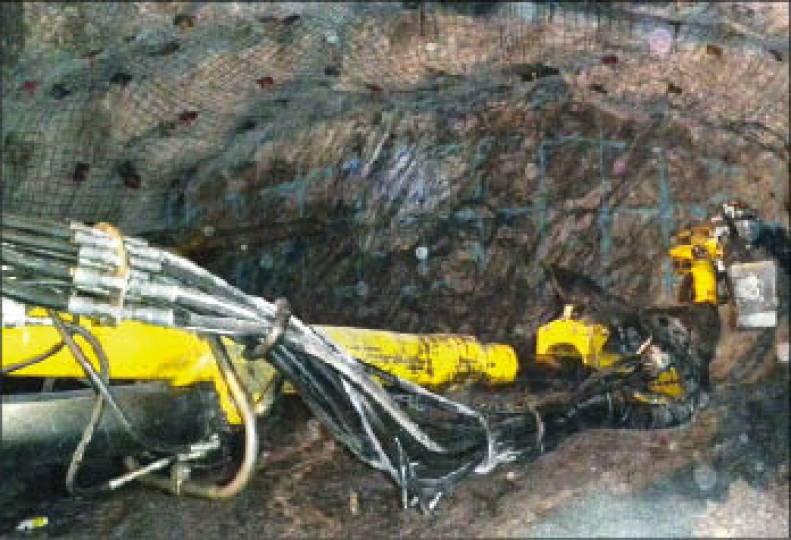 -—Photo courtesy of Hecla Mining Co.
Hecla is doing lateral development, pictured here, about 4,900 feet below the surface to a location where it is considering constructing a new shaft much deeper into the mine.

Though a final decision on whether to go ahead with a major expansion project at the Lucky Friday mine in North Idaho isn't expected until later this year, Coeur d'Alene-based Hecla Mining Co. already is spending millions of dollars to prepare the mine for the project.

If Hecla decides to go ahead, it says it would spend $150 million to $200 million at the mine, sinking a new internal shaft to a depth of roughly 8,000 feet, and opening up more of a promising vein that could boost Lucky Friday's silver production to 5 million troy ounces a year, from about 3 million ounces expected this year.

Hecla reported recently that during the second quarter it spent $14 million at the Lucky Friday, which is located along Interstate 90 in Mullan, Idaho. It spent part of that developing a new lateral tunnel, deep within the mine, to the area where the top of the new shaft would be, and carving out a cavity there to serve as the shaft's hoist room. Hecla also spent money on a liner for a fourth tailings pond, which was needed anyway, but was designed so it's large enough to handle production for the next 15 years, which would be necessary if the mine expansion occurs, it says.

"Though we've not yet finalized the work to make the formal decision, we are moving the project forward incrementally in hope to approve the whole project before year-end," said Phillips S. Baker, president and CEO, in an earnings conference call last month.

Currently, ore is being extracted in the hard-rock underground mine along a vein that's situated about a mile deep and a mile north of the main workings of the silver, lead, and zinc mine. Hecla hauls ore from that vein in specialized trucks through a lateral tunnel that connects with the old workings of the mine, at the 5,900-foot level, and then hoists the ore to the surface using the mine's current main shaft.

What the company has found through exploratory drilling within the mine is that the vein becomes higher-grade as it goes deeper, and so Hecla now is studying the viability of building an entirely new shaft next to the vein that would run from about the 4,900 level to about 7,800 feet and perhaps as deep as 8,800 feet, Baker says. Ore mined deeper in that vein would be hoisted up the new shaft, trucked over to the older part of the mine, and hoisted up the main surface shaft, which runs 6,200 feet below the surface.

The company anticipates that silver grades in the ore that lies deeper than where it's currently mining would be 50 percent higher, and that base-metal grades would be a third higher. It also expects that production volume would grow.

Expansion could mean a much longer expected lifespan for the Lucky Friday, says Don Poirier, vice president of corporate development. Currently, the Lucky Friday is expected to be mined out in 2017, if no further expansions occur. With the new shaft and the deeper mining the shaft would allow, that lifespan would lengthen to the year 2029, Poirier says. The mine's proven and probable silver reserves currently total about 38.5 million ounces, all of which lie above the 7,000-foot level, and further drilling could build on those reserves, he says.

A longer mine life would be welcome news to the Silver Valley, given that the Lucky Friday currently employs more than 250 workers at high, hard-rock mining wages. Poirier says probably 60 to 80 additional workers would be employed at the site during the shaft's five-year construction, and that the permanent work force there also would be expected to grow, though the company doesn't yet know by how much.

In the earnings conference call, Baker said Hecla had looked at a number of alternatives before focusing its attention on a possible new internal shaft, but determined that a new shaft all the way from the surface, and a ramp system such as was used in the mine's old workings, were less viable options.

"The ultimate conclusion was that you have an ore body that goes quite deep and by having this internal shaft, we can get to it quicker than we would be able to with some sort of ramping system, and we can go deeper with that system," he said, adding that a surface shaft would be very expensive to construct.

He said Hecla could decide later to resurrect the idea of a new shaft from the surface, if exploration east and west of the current Lucky Friday mine gives the company ample reason to go ahead with such a project.

Baker said productivity at the Lucky Friday improved in the second quarter, despite a failure in the mine's exhaust shaft and secondary escape exit that required shutting down the mine for several weeks for extensive rehabilitation.

"This is a great ore body and an experienced team, and that lets you absorb the unexpected," he said.

Hecla has cash and an unused line of credit available to fund a large project. The company reported that as of the end of June, it had $197 million in cash and cash equivalents, and no debt. That's up from $57 million a year earlier. It reported cash flow in the second quarter of $54 million, its second highest quarter in the company's 119-year history.

Hecla posted second-quarter net income of $13.7 million, or 6 cents a share, compared with a loss of $910,000 in the year-earlier quarter.