Icons Dave Clack: An accidental but beneficial career in banking 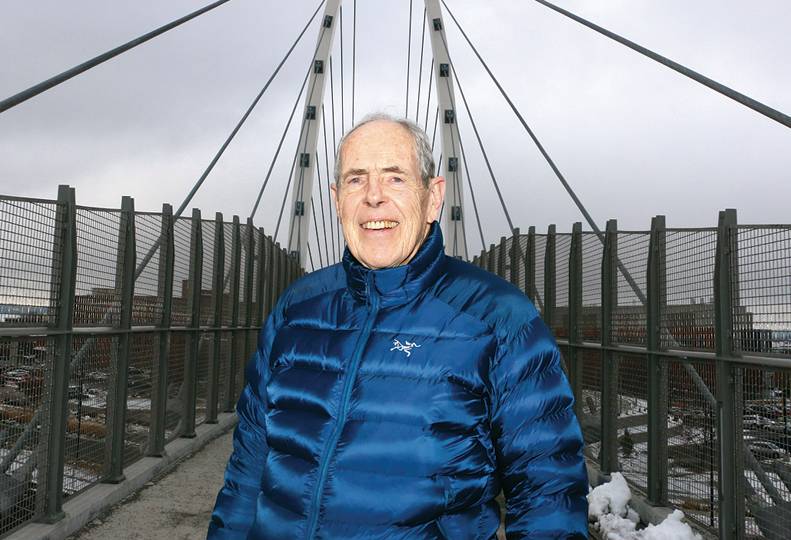 -KIm Crompton
Dave Clack, longtime business executive and civic activist here, stands at the south end of the new University District Gateway Bridge. He helped promote development of the higher-education campus to which the bridge leads.

Looking back on the high points from a career spanning more than four decades that has earned him broad praise in business and civic leadership circles here, Spokane’s David A. Clack seems uneasy dwelling on personal achievements.

He tends, instead, to reflect with a chuckle at his good fortune, at the serendipitous twists and turns that led him down sometimes unexpected but rewarding paths, and to marvel at the mentors, colleagues, and fellow community visionaries who he says helped enrich his life.

He probably still is most recognized as former chairman and CEO of Old National Bancorporation, of Spokane, and its chief subsidiary, Old National Bank of Washington, and as one of four co-chairmen of Momentum, the big multipronged economic development initiative launched in Spokane in 1987.

However, his stature in the community also grew steadily over the years through ventures such as Clack & Co., a consulting company he founded, and through his involvement on numerous boards and in a host of volunteer endeavors.

That included stints as chairman or president of the Spokane Area Chamber of Commerce, Boy Scouts’ Inland Empire Council, Junior Achievement Fund Drive, Association of Washington Business, and United for Washington, to name a few. Among his lengthier roles, he also spent 18 years on the Washington Water Power Co. (later Avista Corp.) board, 10 years on the Spokane Airport Board, and 25 years on the Idaho Forest Industry board.

Of his myriad board experiences, he says, “I’ve had just great opportunities forever, and it’s been so interesting.”

Also on the higher-ed side, Clack played an active role in promoting development of the higher education campus that now occupies former railroad land east of the city’s core and is part of a thriving and still-evolving University District there. He and his wife, Mari, both UW grads, have been key backers of the Friends of WWAMI Spokane program, which was developed to support UW medical students who are being educated in Spokane.

One of the more interesting aspects of Clack’s career is that he never intended to be a banker and ended up on that career track largely by happenstance.

Born in Great Falls, Mont., in 1934, his father, W. Turner Clack, and grandfather, Earl, operated a petroleum distribution business, H. Earl Clack Co., there that his grandfather had launched in the early 1900s and that expanded eventually into a large regional operation.

His family moved to Spokane when Dave Clack was 5, as part of a plan to expand company operations to Eastern Washington and North Idaho, he says, and he attended Lewis and Clark High School here.

“I was raised in the (petroleum) business. When I was 13, I had my first job at our gas station at Queen and Crestline, in Hillyard, so every summer I was working in some phase of the family business,” he says.

He earned a degree in business and finance at UW in 1957, but worked at Kaiser Aluminum Corp.’s Trentwood rolling mill, in Spokane Valley, between his junior and senior year. As a summer vacation fill-in employee, he was able to participate in and learn all facets of the operation just as Kaiser was beginning to produce precisely engineered metal for supersonic military aircraft.

“I got to see everything from where it came in the door to where it went out the door,” he says, “so from an educational experience, it was absolutely priceless to see how a very complex factory operation works.”

Clack then enrolled in law school at the University of Arizona, in Tucson, eager to enhance his knowledge of business and contractual law. However, he was forced to withdraw shortly after starting classes, he says, when he was drafted into the U.S. Army after an earlier-granted student deferment apparently was misfiled.

Even that mix-up turned out to be fortuitous, Clack says, because he was sent for basic training to Colorado, where he was able to spend time indulging his lifelong love of snow skiing, and then, through what he considers a stroke of luck, to a military intelligence school in Maryland.

“That was an extremely fascinating experience because it was an intensive college-level, six-month crash course,” attended mostly by advanced students, he says, adding, “As luck would have it, I got assigned to the Pentagon. One of the all-time great experiences of my life was being at the Pentagon for two years.”

While in the Washington, D.C., area, he says, he also was able to further his legal education, enrolling in courses such as those covering contract and real estate law, at George Washington University.

Clack returned to Spokane in 1960 to begin working again in the family petroleum business, and he married Mari, whom he’d met at UW. By that time, he says, the Clack oil company holdings had been sold to Husky Oil, and Turner Clack had transitioned into petroleum “terminaling” operations, in which Dave Clack’s management responsibilities grew.

He became involved in the banking sector by chance, he says, when organizers sought his and his father’s help in getting startup Spokane National Bank organized and capitalized. That led to an appointment to the bank’s board, where he met North Idaho mining magnate Harry Magnuson, who also was recruited to the board.

The two men soon thereafter were appointed to the board of the much larger West Side-based National Bank of Washington, which Clack says turned out to be “just a great educational experience at my age.” That followed, in the late 1960s, with them being recruited to the ONB board as that bank sought to develop a strategy for attracting younger customers, he says.

At Magnuson’s urging, Clack and his father invested in a formerly family-owned bank in Wallace, Idaho, and Dave Clack ultimately was talked into running the ailing bank and returning it to strong financial health. That, he says, was despite strong reservations by his father, who wanted him to stay more focused on family petroleum business operations.

“It turned out to be the greatest boot-camp experience you could ever ask for,” he says, “because I had to get into every microscopic detail of running a bank and comply with the regulations, as well as keep it profitable.”

He adds, “When I left we had gotten everything straightened out that was out of kilter and brought on good people to continue on, but also expanded to Kellogg and Coeur d’Alene. It was just a really fun ride.”

Clack’s performance there helped pave the way for him to take over the helm at Old National. With strong support from Magnuson, Clack later became ONB’s top CEO on an interim basis after chairman, chief executive, general counsel, and major shareholder Bill Witherspoon died suddenly, with the bank having no succession plan in place.

The appointment became permanent, to Clack’s surprise, after an exhaustive national search failed to turn up anyone deemed to be better qualified.

During his ensuing tenure, which stretched nearly 15 years beginning in 1973, ONB’s total assets increased fivefold, making it the largest bank headquartered in Eastern Washington at the time, with 100 branches throughout the state. It was acquired by U.S. Bancorp in 1987.

Reflecting on his career, Clack, now 84, says, “It veered in a direction that I would have never expected it to go into, with the banking situation, but it turned out to be a very interesting, fascinating, productive period of my life.”

The relentless drive to be as civically active as he was throughout his career, and well beyond his retirement years, was something that was engrained in him, he says, by his father and grandfather.