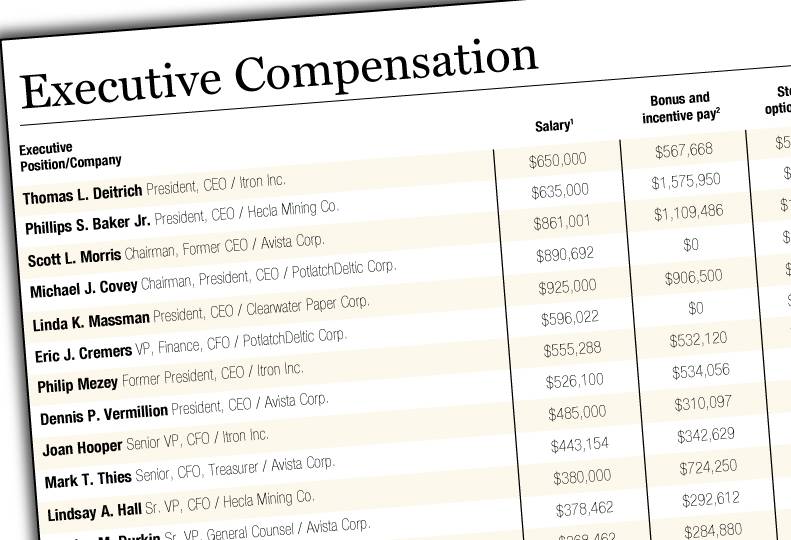 Pre-pandemic executive pay increased by just 1% for executives at Inland Northwest-based publicly traded companies in 2019, according to a Journal of Business analysis.

While the increase is small, it’s a big change from recent years’ analyses, which showed a 23% surge in total compensation one year – 2017 – followed by a double-digit drop in pay the following year.

Last year, average annual total compensation for 36 executives at six public companies came in at $1.722 million, up from $1.706 million for the same group of executives the previous year. A slim majority of those executives, 19, had increases in pay.

The analyses are based on proxies that public companies are required to submit to the U.S. Securities and Exchange Commission. This year’s analysis doesn’t include Gold Reserve Inc., a Spokane-based mining company with stock traded on an over-the-counter market. A Gold Reserve representative said earlier this month the company hadn’t published its proxy yet due to coronavirus-related delays.

The somewhat modest increase in total compensation can be attributed largely to gains in pay for three individuals involved in CEO transitions at the region’s largest and third-largest public companies, in terms of market capitalization.

In the year of transition, Deitrich’s total compensation increased 121%, making him the highest paid public executive in the Inland Northwest, at $6.56 million, while Mezey’s compensation decreased 46%. Morris and Vermillion saw gains of 22% and 62%, respectively.

If those four, presumably one-time big swings in pay are taken out of the equation, average total compensation for Inland Northwest executives decreased by 3.8%.

More such changes will occur next year, as Linda Massman retired as president and CEO of Spokane-based Clearwater Paper Corp. earlier this year. She has been replaced by Arsen Kitch, who previously had been the company senior vice president and general manager of consumer products.

Because total compensation includes stock options, retirement-plan changes, and other such factors, the totals listed are much larger than what those in Inland Northwest C-suites actually take home.

When factoring only salaries and bonuses, a pronounced drop in average pay is revealed in the analysis. Average salary and bonuses slid to $715,700 last year, down 13.4% from $826,700 the previous year.

Each annual analysis contains a different mix of executives, due to retirements, new hires, and a variety of other changes among the executives involved. Consequently, average and median compensation figures from one study aren’t comparable to data from the next analysis.

And, while the number of Inland Northwest-based publicly traded companies remained static for this year’s analysis, the number of companies involved has changed frequently in recent years, usually contracting due to mergers, acquisitions, business closures, and other factors.

A similar scene has played out repeatedly throughout the 2010s. For perspective, 10 years ago, the Journal’s analysis involved 86 executives at 18 public companies based here. Companies that have moved their headquarters include Coeur Mining, now in Chicago, and Red Lion Hotels, now in Denver. Enterprises that have shuttered include one-time prominent Sandpoint-based retailer Coldwater Creek and Spokane-based travel-program provider Ambassador Group Inc. Sterling Financial Corp., parent to Sterling Savings Bank, is among the more significant acquisitions, having been absorbed by Oregon-based Umpqua Bank.

That said, the number of Inland Northwest-based companies could increase next year. TransWorld Entertainment Corp. sold one of its For Your Entertainment subsidiary earlier this year, making Spokane Valley-based online retailer etailz its sole subsidiary.

The company quietly changed the address for its corporate headquarters to etailz’s Sullivan Road offices, giving the Inland Northwest another headquarters for a public company, the first addition to the list in well over a decade.

Massman, the recently retired Clearwater CEO, rounds out the top five, with $3.85 million in total compensation. While fifth in total pay, Massman had the largest salary of all executives for the second straight year, at $925,000.

The former Clearwater CEO is the top paid of the seven women on the list. In all, just under 20% of the named executive officers are women.

The top paid non-CEO on the list is Eric J. Cremers, vice president of finance and chief financial officer at PotlatchDeltic. His total compensation was $3.09 million, up nearly 36% from the previous year.