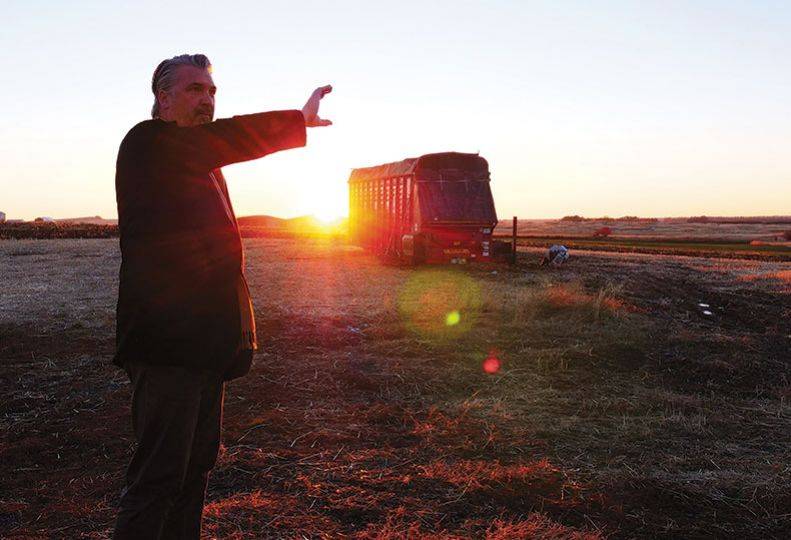 Qualterra CEO Mike Werner says the company will remain headquartered in Pullman, Washington, but a newly acquired research and production facility will bring its work to the Spokane area.

Qualterra is a sustainable agricultural technology company that provides plant testing and propagation. The company also produces a soil amendment called biochar, which is a type of charcoal created from plant matter, in addition to renewable energy, that is captured through a proprietary biomass processing system.

“This facility here. It was critical for us to get all of our technologies in one place where people can come and see it,” says Werner during a recent site visit. “We’re referring to this site as an Agricultural Renewal Center.”

Qualterra’s new facility is located on 77 acres and includes a 4,700-square-foot research and demonstration building at 29128 S. Wells Road, which is amidst rural farmlands about 20 miles south of Spokane’s Eagle Ridge neighborhood, and roughly equidistant between Spangle and Cheney.

The agricultural center will be the new home of Qualterra’s biomass processing unit, which takes crop waste materials that would otherwise get burned off or be left to decompose in the soil and process those materials into a pure form of carbon and ash, while also creating a form of renewable energy.

Duff says Washington state is interested in investing in companies that can create resources from agricultural and industrial waste, and Qualterra’s proposal stood out for being ready to implement in real-world applications.

The Industrial Symbiosis Grant Program was created through a Washington state law enacted in 2021, and Qualterra was awarded one of four grants through the program totaling $850,000.

Duff says the Commerce Department grant is intended to help Qualterra scale its biochar product to be more affordable, reach more consumers, and impact climate change as soon as possible.

“There’s some interesting things that they’re doing to make biochar work, and they’re doing the testing to show how effective it can be in agriculture,” Duff says. “Rather than let (agricultural waste) rot and create methane and cause greenhouse gasses to be released, or to burn the biomass, you can take and cook this under pressure to get this char.”

The biomass processing unit produces two products: biogas, which can be captured and used to generate electricity through gasification technologies; and biochar, which is a stable soil amendment that adds nutrients for soil health, retains soil moisture, and holds onto carbon, potentially for hundreds of years.

Sequestering carbon keeps it from entering the atmosphere in the form of a greenhouse gas, says Duff. He adds that biochar can increase crop yield and acts as a bulking agent that can hold beneficial microbes in the soil, reducing the amount of fertilizer and water needed.

The company sells biochar to agricultural producers and manufactures and sells its biomass processing units to companies such as Vaagen Timbers LLC, of Colville, Washington, which will use the unit to process wood shavings from its timber operations into biochar and will use the energy created to heat the mill’s kiln.

Qualterra’s biomass processing units were moved recently from a facility in Sprague, Washington, to the Spangle property, and new units also will be manufactured at the site, says Werner.

Manufacturing one biomass processing unit takes about five months to complete, Werner explains, adding that unit for Vaagen Timbers will be delivered in the next few months.

One biomass processing unit can process 450 tons of plant material to create about 112 tons of biochar per year, Werner says. The units can be monitored remotely, which will allow for unattended operation over long periods.

He says renewable energy eventually will be captured from the units and used to heat the onsite 2,500-square-foot greenhouse and the warehouse.

Werner says the property will allow for future expansion as research and business needs grow.

“We’ll be able to build a large enclosure out front for a small test plot on the farm, where we’ll have apple trees, cherry trees, hops, and various other crops for people to see. What we’re finding in our research is that crop residue like wheat straw, hops, and rice husks seem to have a unique formulation of a carbon structure that sets itself apart … to grow crops better,” says Werner.

The company’s findings this year indicate biochar can increase crop yields for hops and honey crisp apples 20% to 40%, he claims.

“The exciting thing about all this is that we’re taking a waste stream that would normally be detrimental to our environment and securing that carbon in the soil, and it’s going to stay there,” he says. “That carbon is creating value for the plants and being eliminated from our atmosphere.”

Qualterra operates three business divisions including the BPU, that Werner says will benefit from the space at the new facility.

The plant propagation division, which is based at its Pullman lab, involves growing accurately verified, virus-free plants for the orchard, hops, grape, and berry industries. Plants grown at the lab will be sent to mature at the Spangle farm, as well as at another greenhouse the company leases in Sunnyside, Washington.

The company’s molecular diagnostics group eventually will have space at the Agricultural Renewal Center to test for plant viruses, such as the little cherry virus that Werner says is devastating Washington state’s cherry crop this year.

“We are a certified laboratory to test for that virus,” he adds. “We also have the capability to verify different plants. Then, over the life of the plants that we sell, we can do ongoing surveillance testing to make sure the crops are healthy.”

The new Qualterra site places the company closer to business opportunities in Spokane County, which has over 2,400 farms—second in the state only to Yakima County, Werner says.

“We’ve strategically located our facilities to be available to our customers and partners,” he says. “We want them to come see us and visit us while we’re growing their plants for them so they can see for themselves. That’s important to us to have visibility and transparency with customers.”

Duff says being closer to clients will benefit more than just the customer. “What is a big killer of industrial symbiosis is transportation of material—not just with costs, but you’re also losing all of your carbon benefits if you’re using all that gas, to transport.”

“There are hundreds of millions of tons of agricultural waste every year across the U.S. that would probably fit our profile,” Werner says.

Cowles Ventures LLC, a division of Cowles Co., purchased the land as an investment for Qualterra’s use, Werner says. Swiss agriculture and biotechnology company Syngenta Seeds LLC sold the property to Cowles in September for $525,000, Spokane County Assessor’s Office records show. Cowles Co. owns the Journal of Business through a subsidiary.

Qualterra has 26 employees. The company was established in 2010 and previously operated as NuPhy Inc. It rebranded as Qualterra in September, Werner says.

“The primary goal was to align our company and our brand, and we spent a lot of time … having conversations about what’s important to our identity, but most importantly what’s important to help support in the agriculture sustainability marketplace,” says Werner. “Qualterra, at its roots, means quality earth. Part of our mission is to improve the earth and the environment around us. Not only just the environment of climate, but the environment of how food is produced and how we reinvest in soils to make sure there’s enough soil to produce high-quality yields.”