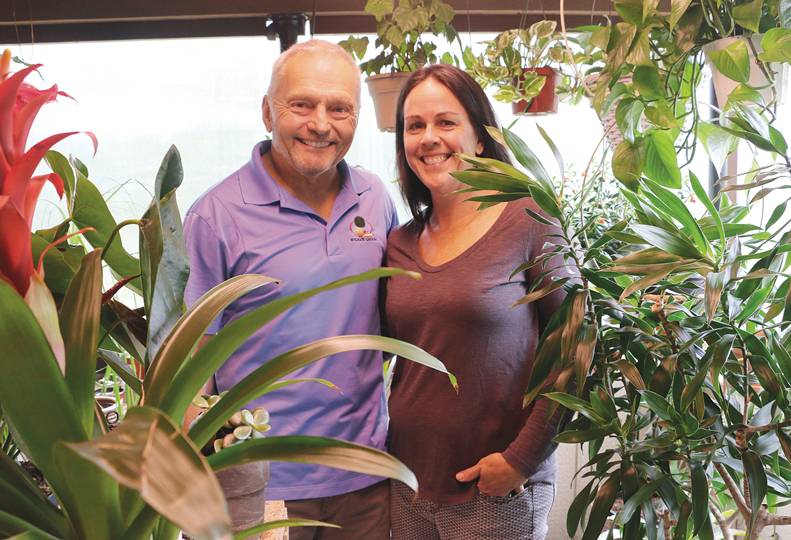 -Virginia Thomas
Kevin and Jennifer King acquired Interior Gardens LLC in June 2019 and operate it out of their home on Spokane’s South Hill.

Kevin King had experience in owning a business. Jennifer King had gardened extensively.  But the husband-wife team says scaling up their talents to the commercial level has been a rewarding challenge since acquiring Interior Gardens LLC.

The Kings bought Interior Gardens in June 2019 from Steve and Pepper Ballien, who started the indoor plantscape company in 1989. Interior Gardens offers several options for greening up a commercial space, including standalone potted plants, living walls, silk plant arrangements, and wall displays such as sconces.

Later, when Kevin worked for a different company that also contracted with Interior Gardens, Steve mentioned that he and Pepper wanted to sell their company. Kevin, who was contemplating a career change, jumped at the opportunity.

Jennifer King had been working as a veterinary technician but left that job to join Kevin in re-establishing the company’s headquarters at their South Hill home.

Jennifer transformed the home’s back porch into a greenhouse and added a grow area for plant cuttings in the basement.

“We try to keep a few in stock, so we can grab something, or if something dies, we can quickly replace it,” Jennifer says.

While Kevin takes care of the bookkeeping and sales, Jennifer oversees plant care.

“Jen is just in seventh heaven,” Kevin says. “And it was something we could do together.”

The Kings say that the flexibility and control the company allows them to have was one of the draws for buying the business. In the years before they bought Interior Gardens, they had established a friendship with the Balliens and came to understand how much of the business could be handled on the owners’ schedule.

Kevin says the Balliens established a high level of trust with customers, who give Interior Gardens access to a variety of buildings, from law offices and car dealerships to banks and jewelry stores. He says those customers—about 100 of them in the greater Spokane area and in North Idaho — create a solid base from which the business can grow.

“There were lots of different opportunities that Steve and Pepper either didn’t investigate or go after, and we saw some different things we could do,” Kevin says. “One thing was working with interior designers. We met one gal, and we’re still working with her. Even through this whole COVID thing, she’s been busy.”

Jennifer says the company also could move into home staging, leasing and placing plants for staging and real estate companies.

Kevin says they’ve managed to retain most of the customers they inherited from the Balliens in the sale of the business, but the company’s growth has been stunted by the ripple effects of the pandemic.

“It was growing like crazy,” he says. “Everything has slowed down with COVID.”

Had the company maintained the trajectory it was taking in the first six months of the Kings’ ownership, Kevin estimates its annual income would be around $300,000.

In addition to managing plants and a staff of three technicians, one of whom was hired after the Kings bought Interior Gardens, Jennifer also has brought the company into the 21st century by building a website for Interior Gardens and adopting a mobile application called Trello to help organize plant care, such as which plants need extra attention and where plants are located.

“We’ve got the database on the computer of our plants and our inventories and our contacts, but then we get out in the field and we don’t have any of that,” Jennifer says. “We’re starting to put all this information on Trello, which, in COVID, has been invaluable, because we’ll get to an account and no one will be there. You bring it up on the app, you’ve got your account list for the day and who you’re supposed to call to get in the building.”

Jennifer says using Trello has helped Interior Gardens to keep track of every plant, including its location and any problems it might have.

“There’s anything from six plants to 60 plants in a facility,” Jennifer says.

Before Trello, a technician might call Jennifer to ask about a palm tree on the third floor of a certain building, and Jennifer wouldn’t necessarily recall that exact plant.

“But now, I can go to the inventory and say ‘yeah, we replaced it on such-and-such a date, it’s had some scale problems, how’s it doing?’” she says. “If something’s giving us trouble, it gives us the ability to track it a little closer and try to figure out what’s going on.”

Interior Gardens provides free consults, during which they evaluate a space for light. Depending on how much light a commercial space receives, customers will receive recommendations based on which plants are likely to survive.

“I always remind people that they’re tropical plants. They don’t belong in your office, so we have to baby them,” Jennifer says. “That’s the difference between inside and outside gardening. Outside gardening, you buy what works in the area. You put it in the ground. You’re solid. Inside, this plant comes from New Guinea. It grows under 60-foot trees and it likes filtered light.”

Kevin says customers can buy or lease plants, which are typically sourced from a nursery in Seattle, but most choose to buy their plants.

“If we provide the plant, then we guarantee the plant,” he says. “If a plant starts going south for whatever reason, we replace it.”

If a plant needs to be replaced, Interior Gardens will either order a plant of the same variety or use a similar plant from Jennifer’s greenhouse. Discarded plants go to Jennifer, who either rehabilitates them, starts new plants from cuttings of the discarded plant, or throws them away if they’re too damaged.

Interior Gardens will care for existing plants, but won’t guarantee or replace them.

Jennifer says some customers know precisely what they want, while others give Interior Gardens free reign.

“Some of them have absolutely no idea, and some people are like ‘I want a braided ficus in the corner, five feet tall,’” she says.

Base pricing for plants depends on size, ranging from $20 for a small desk plant to about $250 for a large potted palm. Jennifer says the plant’s suitability for the environment is also a factor in pricing.

“If they’re asking for a palm in a room that has no light, their monthly fee might be a little higher because we know we’re going to have to replace this palm every other year, because it won’t grow, it’ll just kind of limp along until it’s time to change it out,” she says.

“Once a week, someone goes out to visit them, whether it’s ourselves or one of our technicians, to do watering, dusting, cleaning, examining for disease and bugs, and keeping an eye on things,” Jennifer says.

Blooming plants are replaced quarterly, she says, “so that it’s always blooming and always looks good, no matter the time of year.”

Jennifer says biophilic design, which is the incorporation of natural elements such as wood and stone, in commercial spaces has been popular for several years and has a multitude of benefits.

“It helps with productivity. It helps with mental ease and being happy to be at work,” she says. “Just having plants in a corporate setting usually increases (tenancy). People are more likely to rent a space that has plants versus one that doesn’t have plants.”

However, she says few biophilic designs use living plants.

“The reason plants probably don’t end up in there is because one, they’re a lot of work, and two, they’re messy,” she says. “That’s the part we like to help with.”

As the company expands, Jennifer hopes to incorporate more technology. She envisions taking photos of plants and digitally placing them into spaces using the same software interior designers use. Because so many people are visually oriented, she says it would be useful for them to be able to see what the final design would look like with plants.