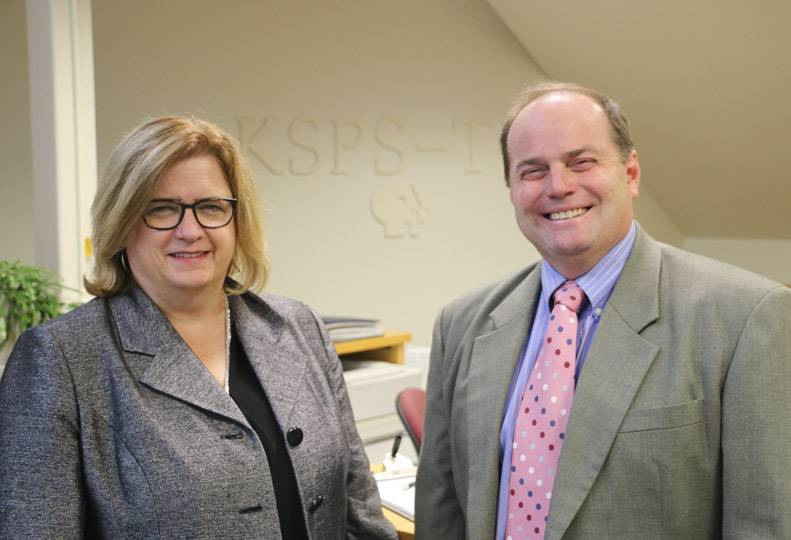 Jason Miller, corporate support representative for KSPS, says the program is an educational initiative of KSPS Public Television in partnership with the Spokane Workforce Council.

“This project came about because we’d been getting a lot of feedback from the business community, asking for help finding a larger workforce,” says Miller. “We had this idea for a website that could connect people with information and videos about some of the most in-demand jobs in our area.”

“We wanted to be assured that it would be a needed tool and, most importantly, be used both in the educational community, as a guide for students, and the business community, as a potential talent pipeline for employers,” he says. “To that end, we shared our idea with several groups, and got their positive feedback that this would be a welcome tool.”

Miller says Career Explore Northwest works by offering area employers the chance to have KSPS create a video that spotlights job opportunities within their businesses.

He says it takes about a month for KSPS to arrange a sponsorship, film a video interview, edit it, and begin putting it on the air.

“Meeting with sponsors and arranging the details takes a while,” he says. “The videos themselves only take about three hours to film.”

Miller says these job spotlight videos are run on air on KSPS during day and early evening hours and are also pushed out on social media channels.

Videos also can be found on the Career Explore Northwest website careerexplorenw.org, which provides a menu of various regional industries, with submenus with up-to-date information provided by the Spokane Workforce Council on jobs or career paths available within that category.

This information includes the level of schooling needed for a particular job, typical hours worked, average salary expectations, the number of positions currently open, and education or training opportunities available in the area.

While some of the careers don’t yet have a job spotlight video attached, Miller says each one still lists all the comprehensive background information provided by the Spokane Workforce Council.

“That way people who are interested in these careers can still read the statistics and have an idea of where to go to connect and pursue them,” he says.

“We asked the Spokane Workforce Council for information on which industries were most in need of labor, which was how we decided to start with manufacturing,” he says. “Since that time, we’ve made about eight videos, and have another 12 set to be developed over the next few months.”

He says sponsors have full usage rights to the videos, meaning they get a copy and can post it to their website, show it at career fairs, link it in job advertisements, or use it on their own social media channels.

When it comes to the typical cost of a sponsorship video, Miller says it varies. “We have various levels of sponsorship available and are happy to work with a sponsor to best create what works for them within the spirit of the project.”

In addition to its job spotlight videos, Miller says KSPS also creates in-depth interview videos that are meant to address deeper questions viewers might have about a particular career. He says videos from the website are also shared with PBS Learning Media, an educational website that reaches a national audience.

Although the videos are a sponsorship opportunity, Miller says they’re not necessarily an advertisement for the sponsor company itself.

“We try to interview employees that are really passionate about their work, who can provide true feedback on how and why they got into the industry, what the work environment is really like, and what they expect going forward,” he says.

In addition to sponsorships, Miller says the project also has received support from the Union Pacific Foundation in the form of a small grant and is actively working to find other grant opportunities.

“When we started Career Explore Northwest, we had three goals in mind—to expose students to jobs, to spotlight local opportunities, and to use the power of video to do both,” says Dawn Bayman, KSPS director of development. “KSPS started as education television, so lifelong learning is part of our mission.”

Miller says the Career Explore Northwest project also fits into some of the goals of the Career Connect Washington Initiative started by Gov. Jay Inslee in May 2017. The initiative is aimed at helping students pursue jobs that pay well after high school through career-ready education, such as registered apprenticeships and technical training programs.

“This project fits into the initial awareness and exploration portion of the career-connected learning framework,” he says.

Both Bayman and Miller say the videos also help battle stereotypes people may have about jobs in certain industries.

“These videos show people what it’s really like working in these environments,” says Bayman.

Although the program is still fairly new, Miller says it’s gaining momentum, and plans to continue growing through more sponsorships and grant funding.

He says KSPS also has recently been reaching out to area school districts to try to incorporate Career Explore Northwest into classrooms, and feedback so far has been positive.

“We’ve been actively presenting Career Explore Northwest to career counselors and career and technical education coordinators in our area districts and it’s being met with welcome applause,” he says. “The teachers are very excited and thankful for this tool, especially because it highlights local jobs and statistics, which always creates a greater connection for students.”

“It creates a greater desire for them to do well in school, so they’ll have the background needed to pursue a career they’re interested in,” he asserts.

Because Career Explore Northwest has operated for less than a year, Miller says KSPS doesn’t yet have statistics showing how many jobs the project has helped to fill, but he says it’s only a matter of time before that data starts coming in.

“Businesses within the community have responded favorably to the project, particularly those who have sponsored videos,” he says.

Bayman says, while the Career Explore Northwest project started by spotlighting high-demand jobs, most of which require only a two-year degree, eventually the site will expand to include careers that require a higher level of education.

Besides working in partnership with the Spokane Workforce Council, Miller says KSPS has also developed an advisory council for the project to ensure it continues to meet the needs of educators, students, and businesses.

“The advisory council includes between 15 and 20 people,” he says. “They help provide feedback and look for ways we can improve the program further.”

Miller says representatives on the council include Robert Reavis, CTE coordinator for Spokane Public Schools; Mick Miller, assistant superintendent of NorthEast Washington ESD 101; Kevin Brockbank, president of Community Colleges of Spokane; Meg Lindsay and Cassidy Peterson, of Greater Spokane Incorporated’s education and workforce team; and leaders from a variety of industries in the Inland Northwest and the Spokane Workforce Council.