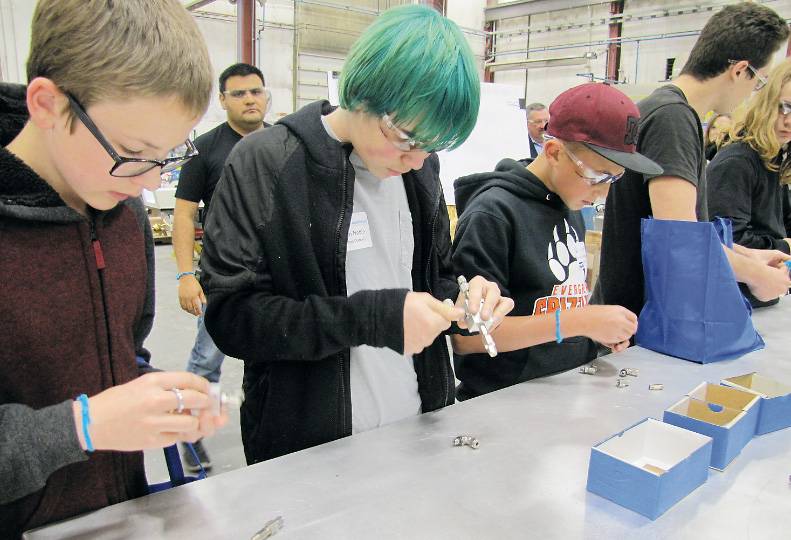 When Spokane-based manufacturer Wagstaff Inc. landed a series of large contracts recently to produce custom machinery components, a quandary presented itself: the maker of aluminum-casting equipment didn’t have the skilled workforce needed to fill the orders.

“I had to find 20 experienced welders, and there are not 20 welders in Spokane who need work—those folks are not just sitting around,” claims Wade Larson, human resources director at Wagstaff. “So I did the big push and a massive media campaign.”

In the end, Wagstaff was able to fill the positions and accommodate its clients, but the scenario exemplifies a growing need in the greater Spokane market for well-trained workers in a variety of skilled trades, many of which don't require a four-year college degree.

With a robust economy and unemployment at its lowest rate in a generation, there's growing urgency among employers to fill career-orientated jobs that boast competitive salaries.

Recognizing that urgency, Greater Spokane Inc., the economic development agency for the Spokane region, has joined forces with area businesses to accommodate the growing workforce needs with its Business AfterSchool program.

Last month, about 100 middle and high school students representing 22 schools from Spokane and Kootenai counties visited Wagstaff’s Spokane Valley plant to discover firsthand what manufacturing jobs are all about as recruiters sought to entice the students and dispel misleading stereotypes about their industry.

Larson says, “For the last 20 to 30 years, we’ve been telling kids they need a four-year education and that trades like manufacturing were ‘dirty’ jobs. The reality is, you can spend two years to get a (trade school) degree and when you walk out you can have a $40,000-a-year job.”

GSI’s Career Connected Learning Program, Larson says, “is a great way to expose kids to career opportunities and help us address some huge labor challenges we’re facing in this area.”

During a two-hour tour of Wagstaff, students visited nine work stations and experienced a series of manufacturing jobs as they observed welding simulators, participated in assembly exercises, and even witnessed huge lathes capable of carving out battleship cannons.

North Central High School student Hannah Harroun says she’s interested in a career in the medical field but is keeping her options open. “It’s interesting to learn about all these machines, how they work and what they make,” she says.

Tony Medvedev, a Lewis and Clark High School student, says he enjoys working with his hands, and a career as a machinist might be a good fit.

“I like creating things and building, so it’s real cool to see how it’s done—and to see if it’s something I’d like to do after I graduate,” Medvedev says.

“We served about 400 students all of last year and this semester alone, from October through mid-December, we’ll have 400 students involved,” she says.

The feedback from those companies has been positive, Peterson says.

Staci Franz, human resources director for INHS, says, “Providing opportunities for students to learn about different career pathways, especially in health care, engages their hearts and minds so they can look toward a future after high school.”

Awareness and excitement for the program continues to grow, says Meg Lindsay, GSI’s director of education and talent acquisition.

“This is a wonderful opportunity for our region’s students, families and community to engage in career-connected learning workshops,” Lindsay says.

Peterson says the demand is so high now for certain manufacturing jobs, such as machinists and skilled welders, that there is a wage war among local companies vying for students with two-year trade degrees.

“The competition to get these students right out of (a two-year program) is very high,” she says.

Indeed, Larson says for students who graduate with a trade degree, a job is usually at their doorstep.

“I can’t get students from North Idaho College because they’ve already got work lined up,” he says. “The fact remains, they will be placed in a career with great benefits.”

At Wagstaff, employees are typically earning over $50,000 annually within five years, Larson asserts, adding, “And that’s before overtime.”