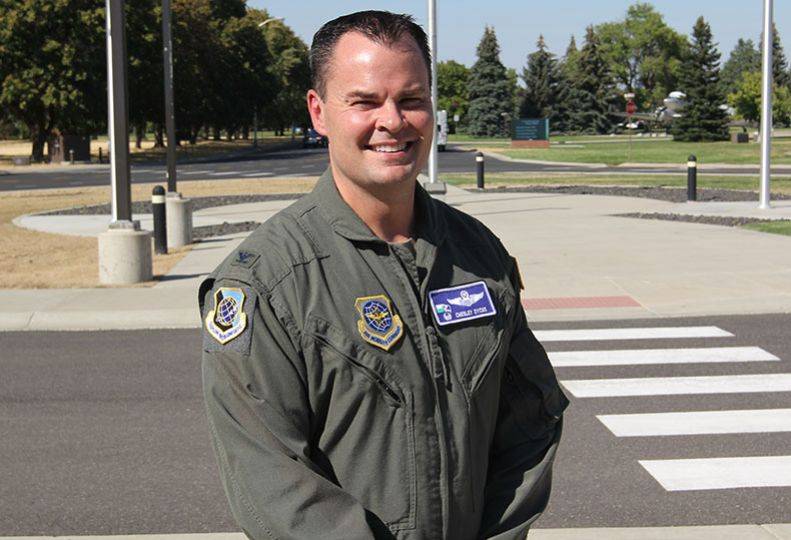 In July, Col. Chesley Dycus took the reins as commander of the 92nd Air Refueling Wing at Fairchild Air Force Base. Dycus takes over for Col. Cassius Bentley, who served as commander for the past two years.

Born and raised in Waverly, Tennessee, Dycus pursued a career in the Air Force promptly after graduating from high school. He attended the United States Air Force Academy just north of Colorado Springs, Colorado, and received a bachelor’s degree in environmental engineering in May of 2000. He continued to further his education and take on assignments, largely in air mobility command. His career in the Air Force spans 22 years, six continents, and over 3,800 flight hours on aircraft such as the KC-135 Stratotanker and the KC-46A Pegasus. His assignments include positions in operational units, squadron command, staff officer duties at Headquarters Air Mobility Command, and the White House.

As commander, Dycus is responsible for activities and assigned functions of Fairchild Air Force Base, an annual budget of $95 million, and approximately 12,800 people, including civilians, uniformed airmen, and their families.

According to Fairchild officials, the combination of jobs and other arrangements at the base had an economic impact of $570 million to the Spokane region in fiscal year 2021.

The Journal recently sat down with Dycus and his senior officer, Command Chief Master Sgt. William Arcuri, to discuss Dycus’ two-year assignment in Spokane, what obstacles he faces, and what he hopes to accomplish during his time.

What motivated you to pursue a career in the Air Force?

I didn’t know what I wanted to do. My friend’s brother graduated from one of the naval academies when I was graduating from high school, and he seemed to have his life together at 22. So, I largely decided to attend one of the military service academies. I pursued that and found myself in pilot training in the U.S. Air Force Academy.

I didn’t know when I was growing up in rural Tennessee what I would be doing now. To be honest, I feel guilty when someone says, ‘Thank you for your service,’ because I’ve had the chance to fly different planes and visit six out of seven continents. I’ve had a lot of incredible opportunities that the Air Force has provided me that I am incredibly grateful for.

Besides the economic impact the base provides, why is this base so important to the region?

One reason is the base is a strategic location. You hear a lot on the news about “near peer adversaries”—one of those resides in the Pacific, the Pacific Theater. We are much closer to that location than any other air refueling wings.

Right now, we are actively supporting the operations in Ukraine, while trying to find the time to potentially prepare for operations in the Pacific. It’s a balancing act for what we have to do now and what we need to prepare for.

There is always a wealth of obstacles. I would say the biggest one right now is balancing what we have to do right now, which is supporting operations in Europe and Middle East command, with a potential for conflict in the Pacific Theater. You don’t prepare for one the way you prepare for the other one.

Because of the nature of the Pacific Theater, it’s vast ocean and you have to move around. It’s called the ‘tyranny of distance.’ There are only so many places to send an airplane—and ships, too, for that matter. So, it’s a significantly different theater and has different training requirements.

If both events were to coincide, you would be prepared to go at a moment’s notice?

We would. The short of it is, decisions would be made at much higher levels, we would be told we need x number of planes here and there and x number of airmen. At that point, it gets more complicated, and we get more specific direction.

That’s largely what we get paid for, is to be ready to deploy depending on what our government decides they want to support. Congress has made a significantl input to continue paying the entire Department of Defense well.

Can you tell me about the pay in the Air Force?

Generally speaking, the newer you are, the less you get paid. The longer you stay in the Air Force, that pay continues to rise. There is a different pay scale for officers and the enlisted; you have to have a bachelor’s degree to be an officer. But it largely depends on how long you’ve been in the Air Force, what skills you have that the Air Force wants to retain, and longevity.

Chief Arcuri, what would you add?

Master Sgt. Arcuri: Yes, it is dependent on those factors. Just like the civilian sector, the higher level of education, the higher level the starting pay is going to be. The enlisted force is more of a blue-collar force. We get annual increases that align with the cost of living within the United States. There are a lot of congressional determinations that have been made to make sure we are keeping pace with the U.S. population.

Sometimes, like in the last year with inflation, the cost of living has gone up faster than our pay and annual increases, so it does put some of our airmen in positions where they are disadvantaged. Which is when we turn to the community. The Favored Few Support Crew Fund for example, they basically donated and built a food pantry here on base because the cost of living was going up so rapidly, we were worried about food security for our youngest airmen.

How much does the Air Force invest in each individual that enlists?

A brand-new 19-year-old from small town America, they sign up, go to basic training for about seven weeks, which is more of an indoctrination to the military. Once they finish basic training, they go off to whatever skills training they need.

Master Sgt. Arcuri: That investment can vary widely. Starting off though, is at least between $60,000 to $80,000 to get them through basic training and the shortest length of technical training. Then you have aspects of relocating them as well, and if they have families, relocating those families. That’s why those numbers vary. Sometimes, by the time an airman shows up to their first base, the Air Force has already spent $200,000 to train them and get them up to speed to where they need to be.

Consequently, those career fields that have longer technical training might have a longer commitment and would require a six-year contract.

What do you look forward to accomplishing in the next two years?

Chief A and I look forward to simply making the organization better. We are the 92nd Air Refueling Wing, our biggest goal is driving that particular mission. Our priorities are directed at investing in our airmen and making their lives better, driving our air refueling mission while driving a culture where people are generally excited and happy to come to work. That’s hard to do sometimes with that balancing act of what needs to be done and what we want to do.

If you were to retire from the Air Force today, where would you call home?

I don’t know where I would call home. I will always call Tennessee home; however, I don’t see myself moving back there. I’ve lived in some great places, Charleston, South Carolina; Tampa, Florida, to name two on the East Coast. I thoroughly enjoyed living in Wichita, Kansas.  If you made me offer a guess, probably Florida.