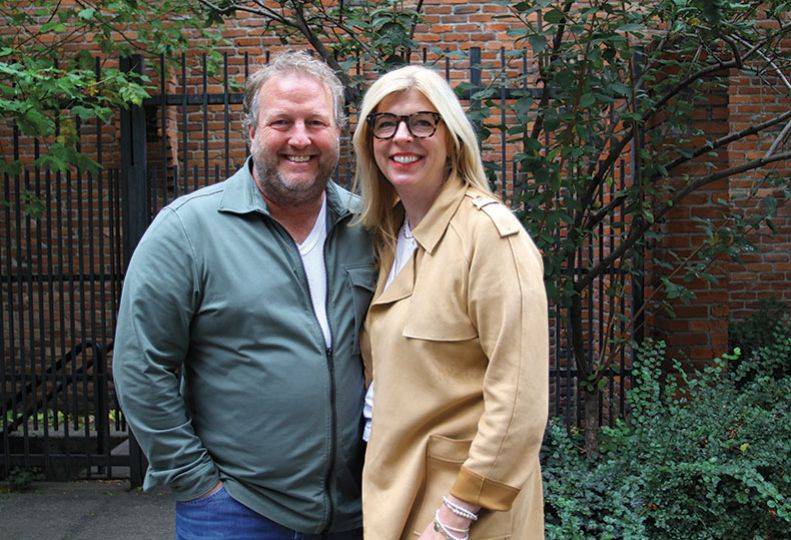 Ryan Harnetiaux is a soccer fan and player, having played soccer in Spokane throughout high school. A graduate of Gonzaga Preparatory School and Gonzaga University, he spent 22 years working in wealth management before moving into consulting in 2018.

Katie Harnetiaux is the chief marketing officer for U.S. retail for Amazon.com Inc., in Seattle. She attended Hutton Elementary School, as well as Lewis and Clark High School. The couple grew up three blocks from each other on the South Hill and met during high school when they were summer counselors at YMCA Camp Reed.

Although the couple currently reside in Seattle, they like to say they live on both sides of the mountains. Ryan Harnetiaux’s parents still live here, and his father has been a playwright-in-residence at the Spokane Civic Theater for years. The couple have three children,— the oldest is a senior at Gonzaga University, the middle is a freshman at the University of Washington, and their youngest is in eighth grade. They say they most likely will move back to their hometown once their youngest graduates high school.

The Journal recently sat down with the couple to discuss the new soccer teams, the economic impact it is already beginning to generate, and what they are most excited for as they work to bring the professional teams to the region.

What prompted you to want to purchase a professional soccer team?

Ryan: I was closely following the news of the stadium and became curious because I had not yet heard a team owner announced. In April, I called (USL Spokane president) Cindy Chipman, who told me an ownership group had not yet been identified. After an hour on the phone with her, I went to Katie and said, “I think I’m going to buy a soccer club in Spokane and put a couple teams in this new stadium downtown.”

That kicked off a rapid process. Two weeks later, USL flew into Seattle to have lunch with us, and that’s how it all got started.

This was a great opportunity for us to combine our love of sports with business and brand. Katie and I feel that we have a specialized sense for what Spokane is, for what Spokane was, and hopefully for what it is becoming. And this is such a huge piece of it for Spokane.

Katie: I did think he was crazy, but I also thought, we are super passionate about women in sports, and we are passionate about Spokane. We both grew up here and raised our kids here for a number of years and have stayed involved in the Spokane community. Ryan played soccer growing up, and he is a big soccer fan. I can’t think of anyone better to do this than Ryan.

The part that is most meaningful for us is being able to say it is both men and women’s teams. To have gender equity, pay equity, and equal opportunity from the beginning.

Could you differentiate the difference between Major League Soccer and United Soccer League?

Ryan: USL operates the largest professional soccer league in North America. MLS is a single-entity league. MLS owns all of the player contracts on every team and has operating agreements with different ownership groups in cities. USL is not a single-entity league; it is an expansion league.

One of the things that excited Katie and me about this opportunity is that USL intends to go to a promotion and regulation system within their leagues, hopefully by 2026 or sooner. The men’s League One will go to a European model where teams could promote into the Championship League at the end of the year, and the Championship League team could be regulated, or brought down, to League One for a year.

What that does is it changes everything with fan engagement because every single game becomes important. You are fighting for promotion, and you are fighting to stay out of regulation.

People who didn’t understand that system but who managed to watch Ted Lasso or Welcome to Wrexham this summer know that is what it’s all about. It adds another level that the MLS will never have.

Can you talk about the business and financial connection with soccer and what that looks like?

Ryan: First of all, soccer has changed dramatically in the last 10 to 15 years. It has turned professional clubs into big business. There are media rights, deals, and a lot of things that are attached to these clubs. That is what will happen here in Spokane.

We wanted to bring this club to Spokane to provide a great on-field experience for people to come and witness. But mostly, our interest is on the platform. If you’ve ever studied any soccer club, the communities they are in, if they do it right, that’s what they are all about. Our interest is in the club as a community asset and as a way to help with access and inclusivity. Katie and I are really big on using this platform to bring this feel to Spokane.

What is the economic impact of having a professional sports team in a community?

Katie: Our season will run about 10 months, with 40 soccer events a year. There will be an influx of people during that length of time, coming to Spokane, staying at the hotels, eating at the restaurants. There will probably be 40 players at a minimum who are going to live in the community. Over the next 1 1/2 years, we will be in a position to hire about 30 administrative positions, and we’ll have a storefront office.

Ryan: The stadium itself has created a lot of economic activity within a few blocks. We’ve had a lot of people who have reached out to us because they have acquired land there or are building attractions like restaurants and bars. The whole entertainment industry is being built out, which is super fun.

Soccer fans are known to go somewhere for two hours before a game and have fun. Then they go to the game for two hours, and then after the game they go somewhere else for two hours. In this community club situation, players could end up being at some of these locations. I hope people embrace that. It will be such a fun thing to be around.

How are the teams generating revenue?

Ryan: The corporate partnership revenue that the club will rely on is significant because we are paying professional players out of our own budgets.

We’ve had incredible beginnings and are in late conversations with some people and lots of early conversations with businesses that want to understand how they can support the club. We will be announcing a few partnerships before Christmas, and a few more in the new year.