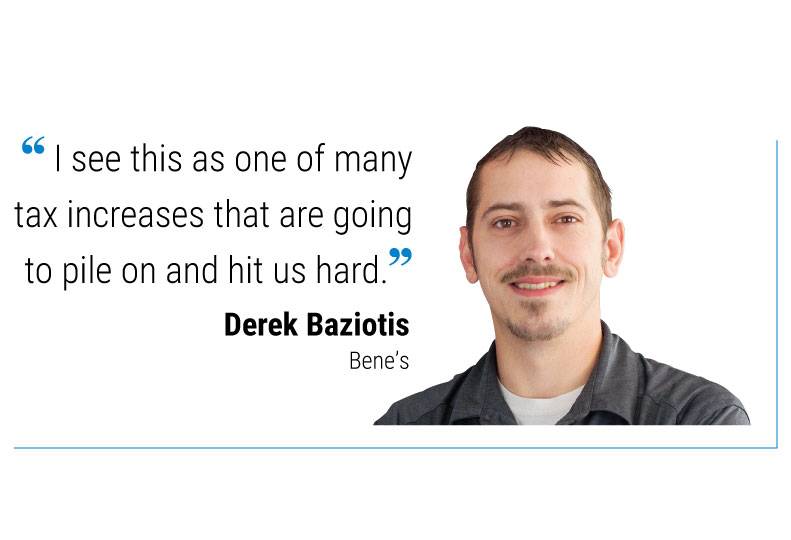 Barring relief, some employers fear recently-implemented unemployment tax increases could be the final straw that puts them out of business permanently.

Average unemployment taxes this year have increased by a total of 412% from 2020 and are expected to provide the state with an additional $834.7 million, according to Washington state Employment Security Department data. The first unemployment insurance tax payment of 2021 is due April 30.

The Washington State Employment Security Department can raise state unemployment insurance taxes in three ways: through the experience tax rate, the social tax rate, or the implementation of a solvency tax. Two of those three categories have been increased substantially for 2021.

The social tax rate, which is paid by all employers at a uniform rate, increased by nearly four times the 2020 rate, to 1.22% of an employer’s total payroll from the previous year’s rate of 0.25%. The rate is calculated by subtracting the taxes an employer paid in the year from total unemployment benefits paid out to an employer’s former employees, and dividing the resulting figure by total taxable payrolls.

The social tax rate is based on costs from the previous year that can’t be attributed to a specific employer and is uniformly distributed across employers. The 2021 rate increase is a result of many permanent business closures in 2020 due to the effects of the pandemic.

The experience tax rate is based on an average of an employer’s layoff history over the previous four years--an employer that lays off employees pays a higher experience tax rate than one that doesn’t lay off employees. That rate is, on average, 125% of the 2020 rate. For some employers, the rates will be much higher, according to recent notices issued by the Washington State Employment Security Department.

Suzanne Schmidt, president and CEO of Spokane-based Inland Pacific Chapter of Associated Builders & Contractors Inc., says she’s heard from some employers that their experience tax has more than doubled. One employer’s experience rate rose to 4.13% from 2.05%, equating to an additional $150,000 to be paid in that case, she says.

The solvency tax remains at 0% for 2021, but ESD projects the 0.2% tax will be implemented in 2022 and 2023. By state law, the 0.2% solvency tax must be imposed on employers when the state’s unemployment insurance trust fund is projected to fall below seven months’ worth of reserves.

Derek Baziotis, board chairman of the Washington Hospitality Association Spokane chapter and owner of Cheney-based restaurant Bene’s, says his experience tax increased to 2.15% from 0.13%. Baziotis laid off his employees for about six weeks early in the pandemic, but he has since found other ways to keep them employed. For example, when he realized Cheney didn’t have access to a third-party delivery service, he created one and converted some employees to delivery drivers.

For the hospitality industry, which has experienced high layoff rates in the wake of state mandates brought on by COVID-19, the tax increases are an especially hard pill to swallow, Baziotis says.

“I see this as one of many tax increases that are going to pile on and hit us hard,” Baziotis says. “We have to make money in order to pay employees and other stuff. This industry will be lost forever if this continues.”

Mark Johnson, senior vice president of policy and government affairs at the Washington Retail Association, says the increases could be the final nail in the coffin of many Washington-based businesses.

“During a pandemic, when revenues are significantly deterred, it’s a really bad time to have to pay a lot more to the state to keep the unemployment insurance system going,” Johnson says. “It’s going to mean the end of a lot of businesses here, unless we get some relief, either federally or from the state or both.”

Some are hopeful that relief could come from the state Legislature soon. Bob Battles, government affairs director at the Association of Washington Business, says a bill requested by Gov. Jay Inslee that was in committee as of the Journal’s press time could wipe away much of what employers owe in 2020 unemployment insurance taxes.

The proposed legislation, SB 5061, seeks to waive experience rating charges for unemployment benefits paid last year from March 22 through May 2, when most industries were hit hard by state-mandated shutdowns. The bill also proposes to decrease the maximum social tax, suspend the solvency tax, and allow employers to request that benefits paid out not be applied to the employer’s experience rating when the unemployment benefits claims result from closure or severe operations impacts due to a public health emergency.

As the proposed legislative measure to reduce the effects of the pandemic on employers makes its way through the legislative process, employers like Baziotis are left to figure out how they’ll pay their 2021 unemployment insurance taxes by the April 30 deadline.

“Even though I didn’t lay off a lot of people and my employees didn’t use the system, I still have to bear this increase,” he says.

“Employers should not be held liable for COVID-19-related layoffs,” Battles says.

John Beck, professor of economics at Gonzaga University, says the tax increases are essentially an increase in the cost of hiring workers.

“It could be the straw that breaks the camel’s back,” Beck says. “Employers might not hire a worker because of that.”

He says that in a typical year, such tax increases might put Washington at a competitive disadvantage in terms of attracting and retaining employers. However, other states are also facing high costs around unemployment.

“I wouldn’t expect it to affect the competitiveness of the state of Washington in attracting or retaining business, if all the other states are doing the same thing at the same time,” Beck says.

He says that presenting the increases in percentages can be misleading.

“To the extent it’s at a relatively low starting point, the percentage increase is going to sound like a really big number,” he says.

Alisha Benson, CEO of Greater Spokane Incorporated, says any increase in the cost of doing business on the heels of the detrimental effects of a pandemic is a hardship for employers.

“In an economy where our businesses are being so massively impacted, we have a lot of concern that if we don’t address some of these things, it’s going to continue to create more burden and do more harm to our businesses, particularly our small businesses,” Benson says.