Players come from all of over the world to be part of Gonzaga basketball program, stay to build careers 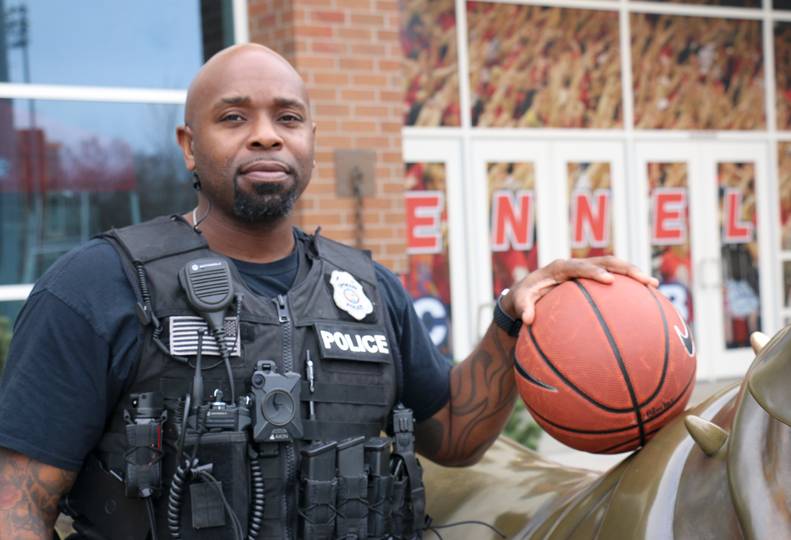 -Kevin Blocker
Winston Brooks played for Gonzaga University in the early 2000s and now works for the Spokane Police Department. He’s one of 20-some post-Cinderella Zags who live and work here now.

-Kevin Blocker
Tony Skinner, who played with Gonzaga from 2002 to 2004, volunteers as a coach of his daughter’s basketball team and works at Sysco.

Buy a house. Lease office space. Invest some money. Get a haircut. Listen to a game. Put a kid in youth basketball. Get arrested.

If it’s in Spokane, there’s a chance a former Gonzaga Bulldog player is involved.

An informal tally—based in part on past players’ contact lists, as they regularly keep in touch—shows 20 post-Cinderella, former Gonzaga men’s basketball players live in Spokane. Another roughly 20 are playing professional basketball, either in the NBA, the NBA’s developmental G League, or overseas.

It’s easy to conclude the roster of former players who will one day return will only grow.

Gonzaga basketball captured the national attention with its improbable Elite Eight run in the NCAA tournament in 1999. Since then, the program has developed into a perennial contender, having made the tournament every year since the Cinderella run. With that streak, it has established itself as a national powerhouse alongside such schools as the University of Kansas, Duke University, and Michigan State University, the only three schools with longer consecutive tournament streaks.

What kept them here?

“The atmosphere,” says Tony Skinner, an Albuquerque, New Mexico native who played at GU from 2002 to 2004. Zag basketball is just as much as a Spokane experience as it is a university experience, according to the 38-year-old father of two.

Now a business consultant at Sysco Spokane, Skinner praises Spokane for its manageability.

“It’s small enough to where there’s not too much, but just enough where you can still have fun,” he says.

“I’m at a stage of life where family, cost of living, and a nine-minute commute mean everything,” he says.

Former Gonzaga teammates still see each other periodically, although it’s clear their roots have grown deeper in the Spokane community they now call home.

“You may not see each other for a while, but you’ve got that bond with each other,” says Winston Brooks, a member of the Spokane Police Department’s Patrol Anti-Crime Team, which investigates local and regional crimes in conjunction with the federal U.S. Marshal’s Office. “I don’t know that you’re going to get that at the (North) Carolinas or the Kansases of the college basketball world.”

When college athletes complete either their education, or playing eligibility comes to an end, it’s not uncommon for them to go elsewhere to earn a living. But anecdotally, GU and Spokane seem to be bucking that trend.

Richard Fox, who’s from Denver, played from 2002 to 2004. Fox is now a broker with Kiemle Hagood, a Spokane-based commercial real estate company. He recently helped put together a deal in which Casey Calvary, who played from 1997 to 2001, and his business partners acquired the Maxwell House Restaurant, at 1425 N. Ash. Calvary, who also lives here, is originally from Tacoma.

More recently, Gary Bell Jr., a player from 2012 to 2015, returned to Spokane to be a graduate assistant with the basketball team after having spent four years playing abroad.

Also, Robert Sacre, a player from 2007 to 2012, ended his playing career with the Los Angeles Lakers and abroad to retire and be closer to his family on property he owns in Colbert.

Bell grew up in Kent, Washington, while Sacre grew up in North Vancouver, British Columbia.

Brooks says he’s not surprised by the return of former Zags players to Spokane. Brooks, who played from 2001 to 2003, has lived from one end of the country to the other. He said he never considered leaving Spokane after completing his education and his playing days were done.

He grew up in inner-city Richmond, Virginia, and played at junior colleges in Kansas, Texas, and North Idaho College, in Coeur d’Alene, before landing at GU.

“The only way I can describe it is that there was this feeling of love here,” Brooks says of not just GU, but also Spokane.

Not long after arriving on the GU campus, he was eager to explore Spokane even more, he says.

Unlike Brooks, Matt Santangelo, who played for GU from 1997 to 2000, says he didn’t think he’d return to Spokane after he finished playing as a Bulldog. The sixth-leading scorer in school history, Santangelo played professionally in Greece, Poland, Spain, and two stints in Italy for close to seven years.

A Portland, Oregon, native, Santangelo, 42, now is raising three children in Spokane with his wife, Cathy, and works for Hoopfest.

“Neither Cathy nor I are from here,” Santangelo says. “When I played, all I really knew about Spokane was the Gonzaga campus and where to hang out on Hamilton (Street).”

As his professional career began to wind down, Santangelo began preparing for the next stages of life. At GU he earned his undergraduate degree in business management with an emphasis in human resources. Santangelo says he invested the money he earned playing professionally with Seattle-based Merriman Wealth Management LLC, which has an office in Spokane.

It was through that connection that Merriman, which at the time was Summit Capital, began recruiting Santangelo to work for the firm.

“(Financial adviser) David Martin began introducing me to clients and it took off from there,” he says.

At the same time, however, Santangelo also was presented with a job offer from the athletic company Adidas in his hometown.

“I chose Summit because it was intimate and felt very entrepreneurial,” he says. “It was just the right fit.”

Santangelo returned to Spokane in 2006. He says he was completely unaware “how big of a deal” GU basketball had become.

“I missed the Dan Dickau, Blake Stepp, and Adam Morrison years,” he says. “There was no high-speed high broadband at the time to keep up or keep in touch.”

Dickau grew up in Portland, Oregon, but returned to Spokane after his professional career ended and owns a chain of barber shops here. Stepp, who arrived at GU from Eugene, Oregon, returned as well, working in sales.

As for Brooks, even though he initially was undecided about what occupational path to take, he was clear on where he wanted to pursue it – in Spokane.

“All I knew was the idea of going back to Richmond and that hard lifestyle was something I didn’t want for myself,” he says.

“Mike approached me about being a (basketball) graduate assistant and starting my master’s,” says Brooks, who has an undergraduate degree in physical education.

Brooks says the basketball staff at Gonzaga wants to help players prepare for life after basketball.

Through basketball, his world expanded. He’s friends with Spokane entrepreneur Matt Goodwin, and George and Theresa Gee, owners and operators of the Gee Automotive Cos., along with Mark and Cathy Poe, who run Poe Asphalt Paving Inc., are among several people Brooks says took him under their wings.

“Mark Few is genuine dude. At the start, I hated him ... always riding you for something. And you can put that in there (the paper),” he says with a laugh. “But after a while, you understand what he’s doing is to get the best out of you.”

Brooks, now a father of 11- and 5-year-old daughters, says he became even more appreciative of Few as he got to know his family.

That connection, says Brooks, is something that not all coaches do with their players.

“Being around Marcie (Few’s wife), their kids, that’s when I began to see another side of him,” Brooks says.

Though his sideline experience as a coach was short lived, and he didn’t finish his master’s, he eventually found his niche and has gone on to have a successful career in law enforcement.

Both Brooks and Santangelo say they now have jobs that they never imagined they’d occupy.

Then in 2014, Spokane attorney Terry Kelly, a longtime member on the board of Hoopfest, approached Santangelo and encouraged him to apply for the executive director’s position that had just become vacant.

He’s now approaching his sixth year in the position, and he and Cathy are nearing their 13th year in Spokane.

“My parents have lived in their house in North Portland for 59 years now,” he says. “I love Portland, but after two, three days, I’m ready to come home.”