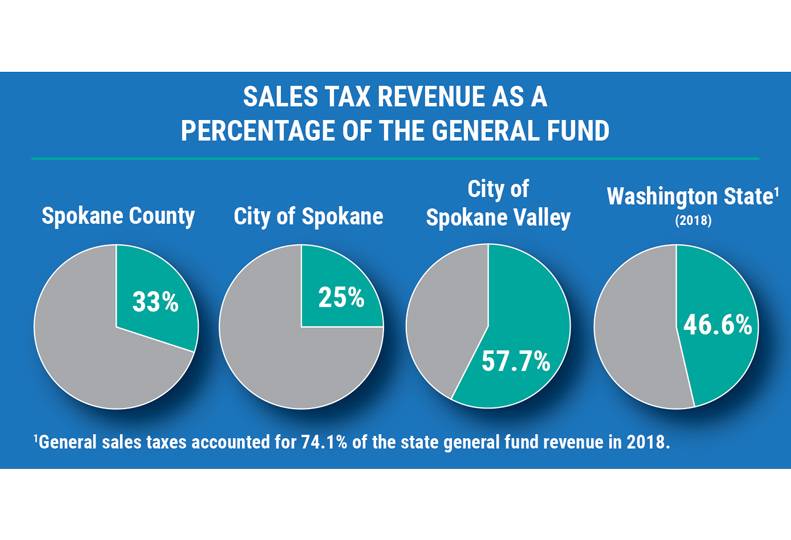 Sales taxes traditionally have provided a relatively stable revenue source for states and local governments during previous economic downturns, but the toll the coronavirus pandemic is taking on the economy is different.

Consumer spending has been limited by social distancing orders, and sales tax revenue has plummeted, creating projected gulfs in state and local budgets.

“It fluctuates a bit depending on the economic conditions at the time,” she says.

The general fund is used to fund core services and departments, such as the police and fire departments, the parks and recreation department, library services, and street improvement projects.

“(The general fund) is used for any general purpose,” she says. “It’s a very good thing to have that flexibility, but that also means that sales tax revenue gets used to support nearly all of our programs.”

She adds the city also now anticipates a loss of nearly $2 million in other revenue sources, such as parking, licensing, and business-related revenue.

“Overall, we’re anticipating close to a $13 million loss in revenue, and we’re monitoring that on a monthly basis, with sales tax being the lion’s share of that revenue loss,” she says.

To reduce the impact of that anticipated shortage, the city has instituted a hiring freeze and is reviewing every planned expenditure, particularly those that are in excess of $100,000, she says.

A lot of the travel and training planned for the year has been canceled, which will result in savings for the city as well, Wallace says.

The city also has asked all of the departments to provide feedback on how the city can reduce expenses.

“Certainly, some departments can absorb more cuts than other departments, so it’s going to be a very surgical approach into how we reduce the budget,” she says.

Wallace says the city has a deadline of the end of June to determine what cuts need to be made, which coincides with when the city will have a better picture of how much of a decrease in revenue it can expect. Currently, the state sales tax reporting is about two months behind, so the June report will be reflective of the activity in April.

Much like with personal taxes, the state was allowed to defer its sales tax reporting through June.

Wallace adds that consumers are behaving differently than what is normal, with more bulk purchasing and cooking at home, which translates to bigger grocery bills.

Despite the measures being taken, Wallace says she doesn’t anticipate the freezes and cuts to cover the expected revenue shortfall, because the city still has the expense of its COVID-19 response, which is projected to be about $5.7 million through 2020.

However, she says the city reserves are in a good position to absorb a portion of the revenue loss.

At the end of 2019, the city had an unappropriated fund balance of about $19.6 million, Wallace says. Last year was a strong one for the economy, she adds, which accounts for the high balance.

Looking forward, Wallace says the city is anticipating a further negative impact to the 2021 budget, albeit not to the same degree.

It’s anticipated currently the city will see a 3% to 5% revenue shortfall next year over what it normally would receive.

“We’ll be watching those industry sectors every month and gauging just how strong of a recovery we have,” says Wallace.

The city of Spokane Valley is still reviewing how much of a budget impact COVID-19 will have, says city spokesman Jeff Kleingartner. The Spokane Valley City Council was expected to discuss the anticipated revenue shortfall at its regular meeting Tuesday evening, June 2, which was after the Journal’s press time.

The City Council will discuss plans to mitigate the expected impact in early August, Kleingartner says, adding that the city doesn’t have plans to raise new taxes to make up for the shortfall.

Spokane County is estimating between a 6% and 10% drop in sales tax revenue, says Jared Webley, spokesman with the county. That equals between $6 million and $12 million in revenue, he adds.

Sales tax revenue accounts for about a third of the total county budget, says Gary Petrovich, Spokane County’s chief budget officer. The total general fund budget for 2020 was just over $211 million, he says, and of that, about $70 million was from sales tax revenue.

The county commissioners have been monitoring the numbers, Webley says, which thus far have been a moving target, changing weekly.

Currently, the county doesn’t have a plan in place to mitigate the impacts, Webley says, adding that most of the conversations about how to do so will take place in June.

“We’re still getting our arms around what the scenario will be, and the coronavirus recovery and relief takes up everybody’s time,” he says. “It seems like everybody’s just holding their breaths to see how this all works out.”

At the state level, Stephen Lerch, chief economist and executive director of the Economic & Revenue Forecast Council, sent a letter to council members with an unofficial April forecast that anticipates the state will see about $7 billion in revenue shortfalls over the next three fiscal years.

Washington state is one of 15 states that rely on sales taxes for more than 40% of their general fund revenue, and one of only six states in which sales taxes represent more than half of their revenue. The other such states are Florida, Nevada, South Dakota, Tennessee, and Texas.

The revenue is based on incomplete data, the letter notes, and official projections will be available in the next state revenue forecast in June.

According to the unofficial forecast numbers, the state is projected to lose $3.8 billion in revenue in the current budget cycle.

In response, the governor’s office ordered a hiring and equipment purchasing freeze, which took effect on May 18.

The Office of Financial Management sent a letter to agency directors asking that they identify operating budget savings options totaling 15% of their upcoming 2021 funding requests with the goal of saving $1.9 billion.

With the 15% reduction, the state Department of Social and Health Services is expected to cut $506 million from its planned 2021 budget. The state’s public universities are being asked to cut a combined $310.1 million.

Legislators will draft a 2021-2023 spending plan when they convene for their scheduled legislative session in January.