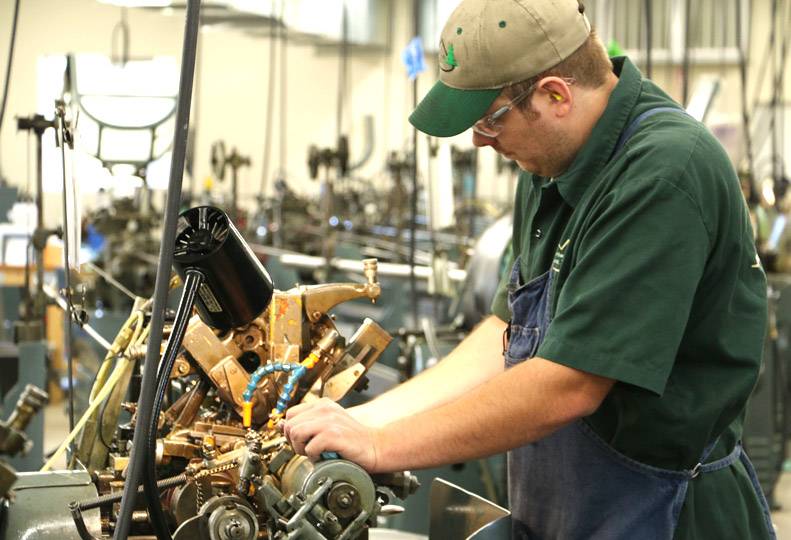 -—Mike McLean
Brandon Krapas sets up a Swiss screw machine for production of a metal part for an aerospace manufacturer. Northwest Swiss has more than 80 screw machines in use.

The company, which manufactures small, machined parts for high-tech industries, has been approached by two companies to produce specialized bone screws for surgical use, because of its reputation for quality and on-time delivery, Spencer asserts.

“We’ve quoted them before, but never been price competitive,” he says.

Potential customers are looking for a reliable source of smaller bone screws as technology improves the precision by which surgeons can repair bones.

“Now there’s a few small ones we can compete on,” Spencer says.

Still, it’s hard to pull the trigger to invest in new machines, cutters and attachments to gamble on a new market, he says.

“If we get into bone screws, we’ll probably have to build another building,” Spencer adds.

NW Swiss has about 15,000 square feet of manufacturing space on three acres of land at 433 W. Lacey, just west of U.S. 95, about five miles north of Interstate 90, where the company has nearly 40 employees.

The space includes a 6,000-square-foot manufacturing building the company constructed last year—the second expansion since the NW Swiss bought the property in 1998.

“I had been leasing a building down the road, but I don’t like to pay rent,” Spencer says.

Most NW Swiss products are threaded or cylindrical or both. They include screws, pins, bushings, and hydraulic and valve components. Many parts have the added complexity of holes, notches, flat edges, and changes in diameter.

“We usually don’t get the easy parts,” Spencer says.

NW Swiss makes parts so small that in some cases thousands of them can fit in the palm of his hand.

Parts range in diameter from barely thicker than a human hair to 1 inch with tolerances within 1/40th of the width of a human hair, Spencer says.

Depending on the size, complexity, and volume of orders, prices range from under 1 cent to nearly $100 per unit, he says.

Declining to disclose more specific revenues, Spencer says NW Swiss’ annual revenue is within the $2 million to $5 million range, and revenue has been on an upward trend in recent years.

The machines often have a number of spindles that can allow them to perform on multiple axes during a single operation.

In all, Northwest Swiss has more than 80 Swiss screw machines, and two 10-axis milling machines.

Some machines have been dedicated for decades to high-volume production of a single part.

The company has more than 50 customers, most of which submit steady orders.

Most NW Swiss-made parts are designed for aerospace applications. The company also makes parts for manufacturers in the medical, electronic, automotive, and communications industries.

Spencer says Honeywell earlier this year helped NW Swiss obtain AS9100 certification, a quality and safety accreditation that major aerospace manufacturers and suppliers require as a condition of doing business with them.

Spencer co-owns NW Swiss with his wife Caren Spencer. Their sons Randy and Darin Spencer also are executives in the company.

Spencer founded the company in 1977, although its roots date back to 1970 when he was machinist in El Monte, Calif., and a job shop owner offered to back him in a startup business venture.

“I got paid to go into business,” Spencer says.

The shop owner gave Spencer a check for two months’ rent for space with two screw machines to start up a specialty machining business with the shop owner as a built-in customer.

“We made a one-year contract,” Spencer says. “I stayed five years and picked up a few customers.”

When the job shop changed hands in 1975, Spencer moved Spencer Screw Products to North Idaho, and initially operated it out of his garage.

“Three customers stuck with me,” he says of the move.

As the business grew in Hayden, Spencer took on a business partner for a short time in 1977 and operated the company under the name of Hayden Screw Products before dissolving that company and launching NW Swiss.

NW Swiss held its own during the recent recession, he says, although it did go through some hard times in the mid to late ’80s following the Challenger space shuttle disaster in 1985.

Spencer says he had big contracts with a supplier to make electrical pins and sockets that had to be replaced after each shuttle launch. After the Challenger broke up during takeoff, NASA grounded the shuttle program for more than two years, and the supplier canceled its orders with NW Swiss.

Spencer says he had to turn away work from other customers when he committed to the shuttle supplier. Before he could get a number of those customers back, NW Swiss cut back to 22 employees from a high of 40, he says.

“That’s the last time I put all my eggs in one basket,” Spencer says.

Regardless of whether NW Swiss expands into manufacturing bone screws, Spencer says he anticipates continued growth for the company.

Some of that growth likely would come through foreign-based aircraft manufacturers such as Airbus Group and Honda Aircraft Co., which NW Swiss customers also supply, he asserts.

“Airbus owns a lot of property back East,” Spencer says. “The company farmed out billions of dollars of work in America last year. By 2016, it’s going to be building planes in the U.S.”