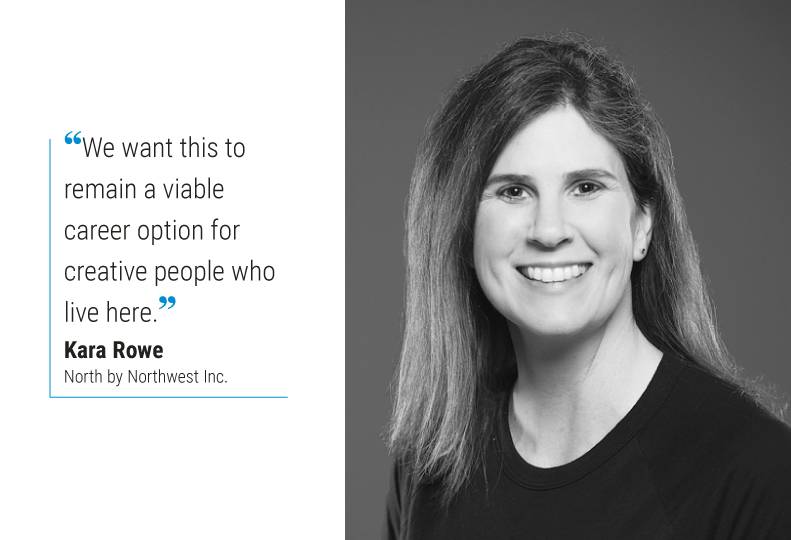 Rowe has assumed the role formerly filled by company co-founder David Tanner, who led the company for seven years. Tanner will continue to serve as a partner, board member, and producer.

“We’re a midsize company, so many of us wear a lot of hats. I just happened to be the next person tapped for leadership,” she says.

Rowe says North by Northwest currently employs about 30 people full time companywide, most of whom work here, although the company also has a production office in Boise.

Rowe began her career as a television news reporter and anchor in Montana, then went into creative video production, followed by a few years in agriculture marketing and policy work.

Rowe has worked with North by Northwest since 2014 and became a partner at the company in 2018. She wrote and produced the Emmy-nominated documentary “The Gamble” and also co-created and produced long-format television shows, including the Outdoor Channel’s “Montana Secrets” and the Emmy-winning “Washington Grown.” As producer and editor, she developed the award-winning historical piece “Glasnost & Goodwill,” as well as the local documentary piece “The Town and the Team.”

Rowe says she hopes in her new position as president and CEO to continue to provide sustainable growth for the film community and video production business in the Inland Northwest.

“North by Northwest has some amazing leaders and role models whom I hope to continue learning from,” she says. “My biggest goal is to continue growing the film and video production industry here and keep our Washington people at work within it. We want this to remain a viable career option for creative people who live here, because they’re important people to have in our community.”

In addition to Rowe and Tanner, North by Northwest’s board of directors also includes partners Rich Cowan, Randy Kron, and Matt Jaime.

Since its founding in 1990, North by Northwest has produced more than 40 major films and television shows. It also specializes in producing creative digital media for clients.

The production company, which is based at 903 W. Broadway, will celebrate 30 years in film and creative video production next year.