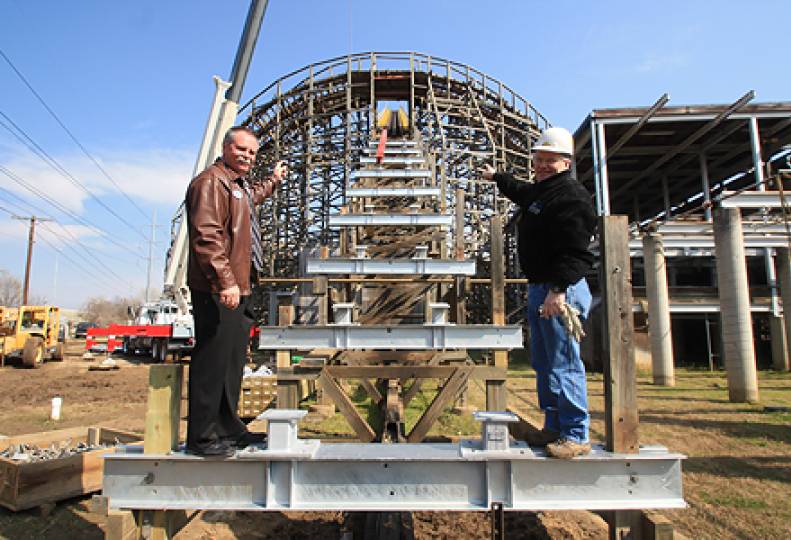 --Photo courtesy of Amusement Today/Gary Slade
Steve Martindale, left, president of Six Flags over Texas, and Fred Grubb, of Rocky Mountain Construction, point out the construction company's proprietary track system during on if its first installations in this 2010 photo.

The move also will make room for the specialty contractor to develop and manufacture high-performance roller coaster cars that can excel on a track that Grubb says is revolutionizing wooden roller coasters.

Rocky Mountain Construction is acting as its own contractor and will own the 18,000-square-foot structure under construction at the southwest corner of Carisa Court and Buckles Road in the Warren K. Industrial Park, in north Hayden. The building will be across Carisa from an 8,800-square-foot office-and-shop building it owns in the park.

"We're keeping the offices and shop here," Grubb says. "We're going to turn the existing shop portion of the building into a coaster-car manufacturing facility."

The company currently manufactures its track system in that building and in a 10,000-square-foot leased building it plans to vacate when it moves the track operations into the larger building.

Ken Ela, who owns and is developing the industrial park, installed the utilities and performed the site work for the project, Grubb says. Working on the project design are Pacific Design Group PS, of Spokane; Inland Northwest Consultants Inc., of Coeur d'Alene; and North Engineering PLLC, of Hayden.

Grubb expects to move the track operations into the new structure within three weeks.

"We're on a condensed schedule," he says.

Rocky Mountain Construction is developing the new cars to take advantage of the performance-enhancing capabilities of its track system, Grubb says.

"Our particular track can turn and twist so extreme, it will take new cars to do that," he asserts.

An engineering team has been working on the design for the new cars for about three months, he says. "We will be building cars we think will be revolutionary for the industry."

He says the combination of the cars and the track system will enable new wooden coasters to include inversions, a feature that no wooden coaster has had since Kings Island theme park, in Mason, Ohio, removed a damaged, structurally flawed loop from its Son of Beast ride in 2006.

"We're developing it so riders can go upside down in a wooden coaster," Grubb says.

Rocky Mountain Construction already has two contracts to build wooden coasters with such features, he says.

One is planned at Silver Dollar City theme park, in Branson, Mo., and the other at Six Flags Fiesta Texas theme park, in San Antonio. Those jobs are valued at a total of $12 million, and both coasters are scheduled to open in the spring of 2013, Grubb says.

Between the larger shop and the car production, he expects the company will hire about a dozen additional employees this year.

Rocky Mountain Construction's proprietary track system involves steel tracks mounted on steel crossbeams that the company fabricates at its facilities in Hayden, ships to the customers' sites, and installs on new or refurbished wooden structures.

The conventional track system for wooden coasters is a pair of wood-laminate beams capped with steel. Those tracks must be replaced every three to four years, Grubb says.

Rocky Mountain Construction's track system lasts longer and can handle greater stress than the conventional track system, Grubb says. That allows more aggressive speeds, dives, and turns without significantly altering the overall feel of a wooden roller coaster, which some coaster enthusiasts prefer over an all-steel-framed roller coaster, he says.

The track has carried Rocky Mountain Construction on a steady climb through the recession, he says.

"Due to that product, we've been able to increase revenues," Grubb says, although, had there been no recession, he expects sales would have been still higher and the company would have had to increase capacity earlier.

"We're selling everything we can make now," he says.

Grubb founded Rocky Mountain Construction in 2001 after erecting the Timber Terror and Tremors wooden roller coasters at Silverwood Theme Park, near Athol. Since then, the company has built wooden- and steel-framed roller coasters throughout the country and across the world. It also repairs and maintains roller coaster structures.