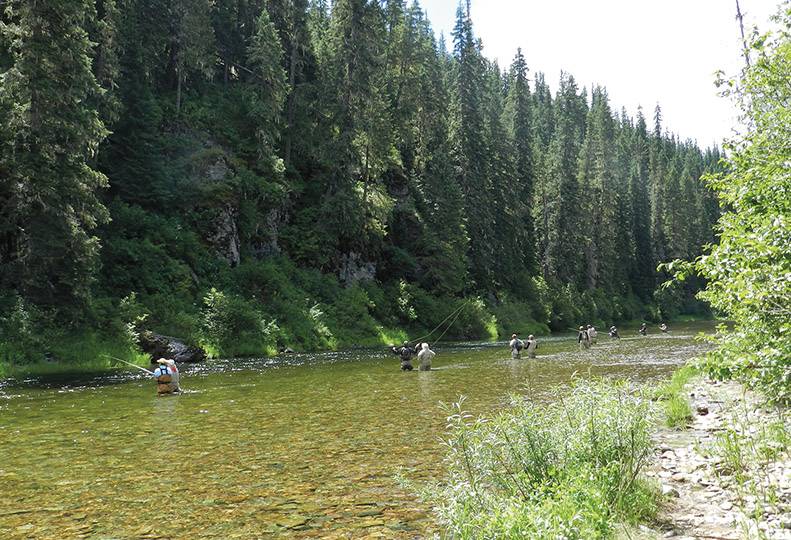 The North Idaho Fly Casters, a fly-fishing club based out of Coeur d’Alene, is using the therapeutic benefits of nature and fly-fishing to help women who have or formerly had breast cancer recover both physically and mentally.

Londeree says North Idaho Fly Casters have been hosting the annual retreats since 2012, and to date, 42 cancer patients and survivors have participated in the three-day event. Each retreat costs about $1,000 per participant, Londeree says, and the club pays for everything except transportation. The club also provides all of the equipment for the retreat, including rods, reels, waders, flies, and boots, he says.

“It used to be the only thing they had to bring was a toothbrush, but I talked to a dentist friend of mine a few years ago and now he gives me 14 toothbrushes,” Londeree says. “Now all they have to bring is a change of clothes.”

Londeree says the retreats are staffed by club volunteers, who are all women, including a medical volunteer and counselors.

“There’s no men allowed in camp, period, until Sunday morning,” he says. “The retreat starts Friday afternoon and goes through Sunday afternoon.”

During a retreat, from arrival until Sunday morning, participants learn fly tying and casting, as well as having time to bond and socialize together, Londeree says. On Sunday, a group of “river helpers,” who can be men, arrive in camp to take the group to the river to put their new fly fishing skills to use, Londeree says.

Whitney Milhoan, the Missoula, Mont.-based executive director for the organization, says 42 Casting for Recovery retreats were held in 2014 by 36 local clubs and organizations. Some hosted more than one, Milhoan says.

Milhoan says Casting for Recovery was founded in 1996 by two women who were fly fishers, one of whom was also a reconstructive surgeon.

Beyond being a bonding and relaxation experience for the women, the actual movements associated with fly fishing have been shown to have physical therapy-like benefits to those recovering from breast cancer surgeries, say both Londeree and Milhoan.

“Casting a fly rod is much different than sitting in a boat, watching a bobber,” Londeree says. “With casting, you’re working all the time, and the motion of casting a fly rod actually helps to repair all those muscles that are damaged in breast cancer surgeries.”

Milhoan says, “Fly fishing is a very gentle activity; there’s not a lot of impact. For some of the women who come, it’s the most active they’ve been. It encourages a good range of motion in the arm and shoulder area without being too strenuous.”

Lynnette Schaller, of Spirit Lake, Idaho, attended the North Idaho Fly Casters’ 2013 Casting for Recovery retreat. At the time, Schaller had severe swelling under her arms from a surgery to remove some of her lymph glands as part of her breast cancer treatment, she says.

“I couldn’t raise my arm,” Schaller says. “It was like a tennis ball under my arm. By the end of the weekend, it was the first time I could move my arm. It was a miracle.”

Milhoan says that beyond the physical benefits of casting, participants experience the therapeutic benefits of being outdoors.

“Fly fishing is a very kind of be-here-now activity,” she says. “Thinking about your fly and your knot and looking at the water, it encourages you to be in that moment … giving women that reprieve from the life of a survivor is one of the most powerful parts of the program.”

Londeree says all of the North Idaho Fly Casters’ retreats to this point have been at the Shoshone Mountain Retreat, which is located on the north fork of the Coeur d’Alene River and is owned by Coeur d’Alene-based Lutherhaven Ministries.

For 2015, the club has decided to move its Casting for Recovery retreat to the Flying B Ranch near Kamiah, Idaho, on the Clearwater River, Londeree says.

He says the retreats are beneficial for the volunteers as well as the participants.

“It’s changed my life; it really has,” he says. “A lot of the guys who go, who have been river helpers, tell me it’s really something for them, even though we have little contact with the gals.”

In fact, Londeree says, several retreat participants have ended up coming back as volunteers, because they can only attend as a participant once.

One such participant was Schaller, whose experience with the staff at the retreat inspired her to return as a volunteer.

“I was still in the middle of treatment; I’d had a second surgery a week before I’d arrived at camp,” she says. “I didn’t even know the results of my biopsy, and the doctor at the retreat called my doctor to get the results so I wouldn’t be worried … I felt such an impact from it. I wanted to give back so much.”

Along with Schaller, fellow 2013 retreat participant Tracy Ball decided to volunteer for the next year as well.

Ball, who was out of treatment when she attended the retreat, says the experience was important for her because she’d never attended a breast cancer support group.

“I got to meet other women with breast cancer and bond with people who had similar situations and diagnoses, and that was huge for me,” she says.

Ball also says she would encourage other women who are past treatment to apply for the retreat.

“The people who have had breast cancer in the past and they’ve come to the retreat have found they haven’t gotten past some of their issues, even though they thought they had,” she says.

Londeree say each annual Casting for Recovery retreat serves 14 women ages 25 to 90. The club receives an average of 30 applicants per retreat, Londeree says.

“The applications are submitted to (Casting for Recovery headquarters), put in a hat, and they pick the names out of the hat,” he says.

Applicants for the retreats can come from anywhere in the 13 northern counties of Idaho or the five eastern counties o  Washington, Londeree says.

“There’s another retreat in Western Washington and another in Southern Idaho,” he says. “Everybody does their own fundraising and their own staffing.”

Applicants also can be in any stage of diagnosis, treatment, or recovery, Londeree says.

“We have had ladies down to stage-four cancer at the age of 28,” he says. “There’s no age restrictions, no length of time of survival, from early diagnosis to many years of survival. It doesn’t matter.”

Londeree says he’s had conversations with some women who have been survivors for a long time who think that because they don’t have cancer anymore, the retreat isn’t right for them.

“And I say, ‘That’s why you need to apply; maybe you could help someone else,’” he says. “And they come back and say ‘Dave, that was the best thing.’”

Londeree says that the club first applied to Casting for Recovery to begin hosting retreats in 2011. However, the club first began thinking about it in 2010, he says.

“I was at a fly-tying show in Lewiston (Idaho) in March of 2010, and I was stationed right across from the Casting for Recovery group, and I talked to the folks there,” he says.

Londeree says he took the idea back to the North Idaho Fly Casters, and the club decided to investigate and try hosting one retreat.

“We got the ball rolling, and it never stopped rolling,” he says.

Londeree says that, in the future, the club would like to expand its reach into some of the outlying communities.

“Most of our participants have some from the Coeur d’Alene and Post Falls area, including Athol maybe, but still Kootenai County,” he says. “Very few of our ladies come from northern Idaho, or the southern area.”