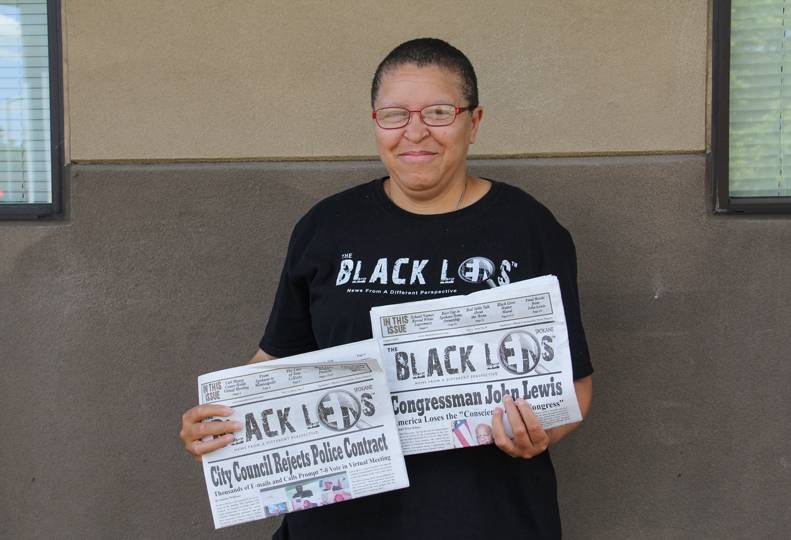 Five years ago, Sandra Williams launched The Black Lens newspaper as an experiment. Since then, the publication has become integral to Spokane's Black community and its allies.

Published monthly, The Black Lens covers a range of issues affecting Black people in Spokane and across the country through news reporting and opinion columns. The Black Lens is a trade name for Williams' company Square Peg Multimedia LLC.

The Journal spoke with Williams about what it's like to publish a Black newspaper in the tumult of 2020, how the publication has changed, and Williams' vision for the future of The Black Lens.

Journal: How did the publication get started?

Williams: There had been conversations in the Black community about the need for a newspaper. There used to be a paper back in the '90s called the African-American Voice, which lasted about five years. Then there wasn't anything since then. A lot of people were expressing the need for a communication source. I had been hearing that and had been doing other kinds of media--radio and theater and television and film---and had never done print media. I just decided to give it a shot. The short of a long story is, my dad got sick. While I was spending time with him, I decided to see if I could figure out how to put a paper together. It started as an experiment, and then took on a life of its own.

What have been some important points in the history of the Black Lens?

The growth is significant. I started at 500 copies and had maybe a dozen places I'd drop them off. The paper was 12 pages, initially. Nobody really knew about it. In 5 1/2 years, it's grown to 24 to 28 pages. It depends on the month. It's more than doubled in size. I now have almost 600 subscribers. I dropped down the number I print since COVID hit, but when things get back to normal, I'm printing 1,300 copies. Everything has grown in terms of the paper having an impact on the community.

One of the most significant things I do is an election issue every year, where I highlight candidates and have them answer questions that are specific to the African American community. That's grown from something that nobody really paid attention to a few years ago, to something that candidates actually seek out and ask to be a part of. I've addressed issues that were significant in the community -- most recently with EWU's decision, at the time, to close down their office of equity and inclusion -- I was the first news publication in Spokane to cover that. I think there's some significance in that the paper's starting to make an impact on mainstream things, versus it just being something internal to the Black community. It started to have an impact on Spokane as a whole.

Has the role of the Black Lens in the community changed over this year?

How are you responding to that amplification?

Then after the George Floyd murder and Breonna Taylor and Ahmaud Arbery, and the protests had started happening around town, it became really important to have Black people have a venue where they could speak for themselves, as much as I could without editorializing, to just let people's voices be heard.

That's been important for me and for the community. And then just advocating on behalf of the community. That's something the paper has always done, but just trying to make sure whenever there was an issue that somebody was speaking about it and looking at it specifically through the lens of the Black community.

Has the interest or the demographics of your readership changed over the past couple of years?

I sort of stabilized at about 250 subscribers, and it's been that way for a couple of years. In the last couple of months, after George Floyd was killed, it more than doubled in about three weeks. We're happy for it, but I had no infrastructure to handle that.

I think there was a desire on the part of a lot of people to do something, that they wanted something tangible to do, and getting a subscription was a simple, tangible thing that people could do to show some support. I was there. It was just the right time. (The Black Lens) is getting lot of attention, a lot of good feedback.

I don't know that the demographics have changed. It's just bigger. Because the Black community only makes up less than 2% of the population, the majority of my subscribers have always been non-Black. I don't think I could survive, financially, if that wasn't the case. I think it's just become exponentially bigger. More Black people subscribing, and more non-Black people subscribing. I think demographically it has stayed similar. It's just bigger, way bigger.

How has the scope of your reporting changed since you launched the publication?

Initially, my intention was to tell personal interest stories. My thought process was, as I read the newspaper, you don't really see much about people in the Black community unless they're getting into some sort of trouble, or they're an athlete or entertainer. I was just going to tell human interest stories.

That didn't last very long. I didn't even make it through the first issue, trying to do that, just because there's so much stuff to be covered. The first story on the very first issue of the paper was a story that I wrote about racial disparities in use of force with the police department, which is something that's come up again. I started covering that stuff back then, and I'm still covering it now, so that hasn't changed at all.

I think what's different is that I have more voices now than I did then. I was pretty much the only voice in the paper when I started, and now I have more contributors, both regular contributors and people who, from time to time, decide they want to write a story.

How many regular contributors do you have now?

Regular, there's only three. I have two columns, and then one guy, Bertoni (Jones Bey), who does the art and history column just about every month. He does a column on somebody, some historical figure, and then there's an art piece attached to it. He's been doing that almost since the very beginning. I have a spiritual column that's by Beverly Spears, and then I have what you would call a campus column, just sort of a reflective column, that she does every month. The NAACP does something every month. Those are the four things that are every month. Outside of that, it depends on the month. There are some months when I have a lot of local content, surprisingly so, and then there's some months where I hardly have any local content. I just never know. I wait for the deadline and see what I have and put it together.

How many employees do you have?

There's me, and I just was able to hire an employee. I got a grant from the Group Health Foundation. They wanted to support independent media in this time of COVID. I can't tell you how incredible that is. Because of that grant, I was able to hire a part-time person who's helping me do some of the layout work and creative work, and some of the administrative work, just to take a little bit of that off my shoulders. And I have four volunteers that help me do the stuffing for mailings.

I just got a grant from Spokane Arts, which I'm really excited about. It's to do a special insert for the February paper of 2021, which is the Black History Month issue. I'm going to be doing a special insert that's called "To Be Black in Spokane." It's going to focus on 20 Black people sharing their stories, and it's going to be sort of a blending of print media with technology. That may take us into a new realm in terms of what the paper's capable of being. That's only happening because of some of the support that I'm getting through Group Health Foundation and Spokane Arts that I'm able to try that kind of stuff out.

How do you see the Black Lens continuing to evolve?

I hope to use some of the money that I got from Group Health Foundation to be able to pay stipends to some writers, which I've never been able to do and I would love to be able to do that, particularly for young writers, to get them interested and experienced in newspaper writing, journalism, and storytelling.

I think it's just to continue doing what the paper is doing, which is just being this little voice that continues to speak much the same language, consistently, and people are starting to hear that. The reason that I did the story about Eastern Washington University was because I was contacted by students. I didn't seek that story out. The students were frustrated and felt like they weren't being heard by anybody. They sought me out, and felt like if somebody would just tell their story, that would help. I think when they discovered that when I told their story it did help them, that was a really powerful lesson for them to learn. The more of that stuff that the paper can do, the role that it'll have in this community will continue. That's what I'm hoping for.