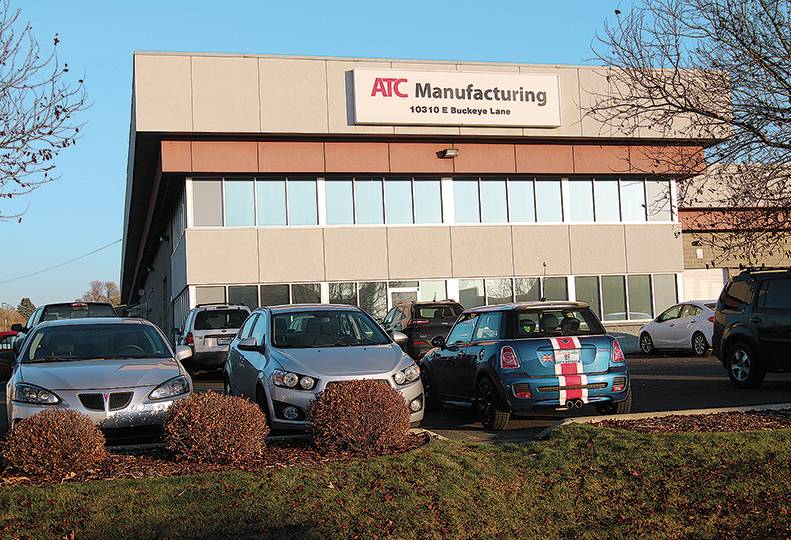 -Katie Ross
Advanced Thermoplastic Composites Inc., currently located in Spokane Valley, has announced its intent to build a new facility in Post Falls and move there next year.

With its new tax breaks and Spokane Valley-based aerospace parts manufacturer Advanced Thermoplastic Composites Inc. relocating there next year, Idaho appears to be poised to draw more businesses away from the Spokane area.

ATC, which is located at 10310 E. Buckeye, is reportedly building a $4.9 million, 65,000-square-foot facility in Post Falls that it will move into next year. The company will be taking all 70 of its jobs with it and, as part of its tax-incentive agreement, expects to create 50 more in the next few years. ATC founder and president Dan Jorgenson couldn’t be reached for comment.

ATC is the first company in the Spokane area to take advantage of Idaho’s tax reimbursement incentive program, which was adopted in July. The program enables companies that commit to creating a certain number of jobs receive credit immediately off their corporate income tax, withholding tax, or sales tax.

Steve Griffitts, president of Jobs Plus, the Coeur d’Alene economic development corporation, says the minimum number of jobs a company has to create to qualify is 50.

Companies that participate in the incentives also have to pay wages of $16 an hour or above, Griffitts says. The incentive program is patterned after a similar program in Utah, he says.

“It’s an amazingly strong incentive program,” he says. “…I think part of it is, we have a very strong pro-business environment, and we have great contact opportunities and partnerships within our cities. Post Falls, Coeur d’Alene, Rathdrum, and Hayden all work together for the benefit of the region.”

Robin Toth, vice president of business development for Greater Spokane Incorporated, says the organization has heard from another company that is looking at relocating to Idaho. Toth declines to disclose the company name, but says it’s a larger company than ATC.

Toth says that the incentives provide an opportunity for businesses to save by moving to Idaho.

“I think everyone is looking at the cost of doing business, and right now it appears, in certain industries, that Idaho makes a good case that they can provide lower operating costs for businesses,” she says.

Toth says that Idaho’s reimbursement incentives possibly could enable some companies to save up to six figures a year.

“Sometimes it just happens,” he says. “I don’t want anyone to think we’re identifying a business model to get people moving 15 miles, but we aren’t going to say no. We want to work together with GSI and our region; it’s just sometimes our business model … makes economic sense.”

Toth says that, depending on things such as worker’s compensation and unemployment, some companies may see other states as better for their businesses.

“Since we’re so close to the border and that state (Idaho) is offering tax breaks, that’s very powerful to companies,” she says. “When we know about it, we make the case for Washington. But, companies obviously need to be profitable and that powers a lot of decision making.”

Toth says that if more Spokane-area businesses decide to take advantage of the tax breaks, it could impact the area’s attractiveness to other businesses.

“I think that will have a tremendous impact on us being able to recruit companies, because they’ll wonder why our companies are going across the state line,” she says.

Toth says that large companies follow these trends, and that all of them are looking for incentives.

“Every time we’re talking to a company, in every case, either the company itself or their site selector are asking us for concessions or incentives,” she says.

The issue in Washington, Toth says, is that the state’s constitution doesn’t allow tax revenues, or any public funds, to be used for private gain.

“So everything is predicated on that,” she says. “When you have an incentive, it has to be developed in a certain way. We can’t just provide cash to keep a company here. Idaho is totally different. They’re offering a rebate on taxes that, in many cases, we can’t offer in Washington state.”

One possible solution, Toth says, is to work with legislators to come up with incentives.

“We want to take it to the next level and educate legislators on how Washington is becoming less and less competitive,” she says.

GSI has hired an outside company to do a two-part analysis on Spokane’s competitiveness and attractiveness to businesses, and another comparing Washington to other states.

“Usually when a customer identifies Spokane (as a possible site), they’re looking at four or five communities of the same profile,” Toth says.

An area’s profile includes information on the population, location, the availability of sites, workforce numbers, and more, she says.

“What does Spokane have or have not that these other location have that allows them to be more successful?” Toth says.

The second analysis will compare Washington state to its competitors, to hopefully understand how to bring more business to the state, she says.

“We are going to contract with an economic development firm that’s located in Washington to conduct the survey,” Toth says.

The first analysis will hopefully be completed in a couple of months, she says.

“We wanted to have the entire thing done by the start of the legislative term, but we think phase one will be good,” she says. “We’re looking for partners for funding the rest.”