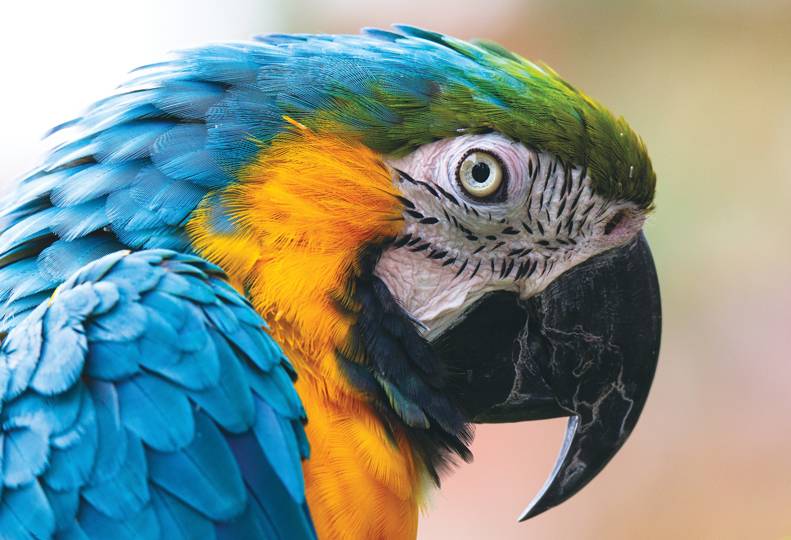 With a longstanding desire to help people with neurological conditions experience an improved quality of life, entrepreneur David Hojah has found in Spokane a place where he wants to accomplish his goal.

The 34-year-old Hojah is the founder of Parrots Inc., a company that has developed an artificially intelligent parrot named Polly that can be perched on a wheelchair or bedside, enabling users with neurological disorders to have a 360-degree field of vision via laptop or tablet while improving their ability to communicate, he says.

Such neurological disorders include amyotrophic lateral sclerosis and multiple scleroris.

Polly employs artificial intelligence and machine learning allowing those who can’t talk to communicate in real time with what’s called an intuitive prediction system, he says.

Since Hojah relocated Parrots Inc. to Spokane from Seattle earlier this year, the startup has forged a relationship with the Steve Gleason Institute for Neuroscience at Washington State University Health Sciences, in Spokane. Hojah and Parrots Inc.’s accompanying developers will be moving into laboratory space on the campus in Spokane’s University District starting this month, he says.

Meanwhile, Parrots Inc. already has secured local investment in just the few months it has been in Spokane

Hojah, a 34-year-old from Boston who has a bachelor’s degree in mechanical engineering from Harvard University, founded Parrots Inc. in 2019 after three years of development. He’s one of six full-time developers for the company, which continues to garner local and national attention for its product. The company soon plans to hire three additional interns with the goal of eventually hiring them full time, he says.

Last year marked the first year the company generated revenue, an amount Hojah declines to disclose. He anticipates, however, the company will see a revenue increase of more than 60% in 2021.

The company is working actively with the U.S. Department of Veterans Affairs to enable Polly to be covered by insurance for disabled veterans using wheelchairs. Parrots Inc. also is having conversations with private insurance companies about coverage as well, he says.

Securing insurance coverage for the device and its accompanying software would be lucrative for the company, he asserts.

Parrots Inc. currently has more than 150 customers across the U.S.; individuals who have neurological conditions or who have experienced some form of bodily deterioration. The hardware, much of which is housed in Polly’s interior, costs $1,500, and the software needed to operate it costs $50 per month, he says.

Theresa Whitlock-Wild serves as a project manager at WSU’s Gleason Institute. She met Hojah three years ago and says she was impressed immediately by the work he’s already accomplished in the AI field.

“He’s created an AI device designed to communicate in a more personable way,” says Whitlock-Wild, whose husband has ALS.

To date, Whitlock-Wild says it’s been her observation that communication software for those who’ve lost the ability to speak has tended to be mechanical and robotic.

Though she’s yet to see Polly operate live, video examples she’s seen reveal a more intuitive and personalized way of communicating with someone who can’t speak, she says.

“I can see this having a profound impact for families impacted by these kinds of disabilities and injuries,” she says.

Spokane entrepreneur and angel investor Tom Simpson is among Spokane’s first investors in Parrots Inc. Simpson says Hojah contacted him between two and three months ago to introduce himself and then requested the chance to make a virtual pitch for funding.

Simpson, who declines to disclose the amount of investment made to Parrots Inc., says he was beyond impressed by what Hojah and his company have accomplished to date.

“The first thing investors ask is, ‘Why are people doing this?’ And he has a rational and passionate reason behind what he is doing,” Simpson says. “Then, I looked at his education, and clearly, he has the knowledge and expertise to put his creation in motion.”

And Simpson claims the fact Polly is already in use made it a near no-brainer to invest in the company.

In putting together the physical hardware—the AI-based replica parrot—and the accompanying software used to control it, Hojah and his team have consulted with wheelchair patients, caregivers, clinicians, doctors, medical insurers, and physicians to develop Polly.

The hardware aids indoor and outdoor navigation can connect with smart-home devices and is compatible with devices and technologies already in place on the user’s wheelchair, Hojah says.

“To build the compatibility was not an easy job,” he says. “With their already existing platforms and software—eye gaze, joystick, or head mouse used to control the wheelchair. We’re still working daily to improve compatibility.”

In giving users more independence with help from Polly, caretakers become freed up to complete other tasks for their patients, Hojah says.

“They can become more efficient ... have a break,” he says.

“When I was a kid, I was an innovator and liked to create things,” he says.

One day, he went so far as to dismantle the family television out of curiosity to see its interior before putting it back together, he says.

Later, he saw an uncle suffer a severe injury to his spinal cord that over time caused a series of disabilities that put him in a wheelchair full time.

“I tried to be a mini-caregiver helping him with whatever I could,” Hojah says.

After that, Hojah says, he watched an aunt with multiple sclerosis as the disease caused her to decline physically.

“It was another severe condition, and a source of frustration for the family members, myself, herself, everyone ... the pain, the frustration, not being able to do anything, and then she passed away,” he says.

Once at Harvard, Hojah found inspiration from classmates, instructors, and eventually Stephen Hawking, the English theoretical cosmologist and physicist who died in 2018 at age 76 after developing ALS in the late 1970s.

“I do believe there are many people like Stephen Hawking out there,” he says. “They are just missing accessible technology to be the next Stephen Hawking, engineer, professor, designer, artist—whatever they want to be.”

He adds, “I said to myself, ‘I can combine my passion serving a great purpose helping all these people to be able to achieve their dreams.’”