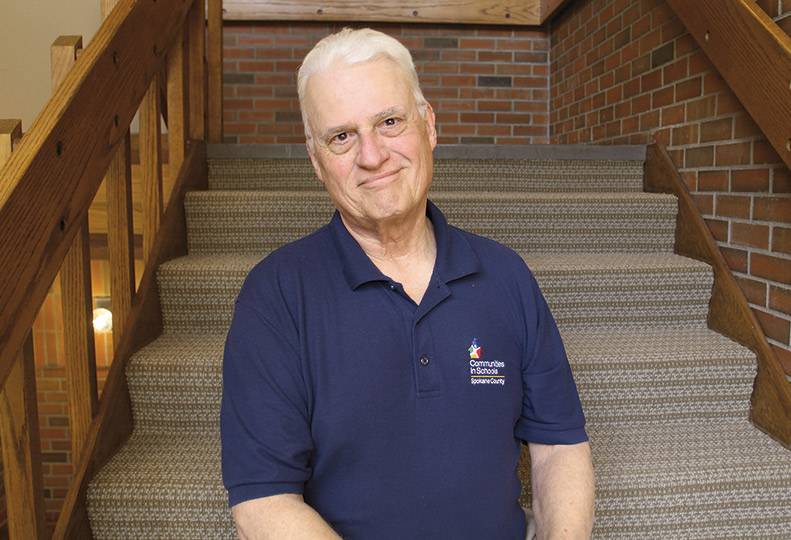 Chuck Teegarden became the executive director of Communities in Schools in 2015 at the age of 62, bringing with him over 30 years of leadership experience. Now, for the next year, he will be training Debra Raub, the organization’s funding development director, to take over his role effective April 1, 2023.

After graduating high school in rural western Oregon, Teegarden joined the Army, where he was a marine engineer in the Middle East. Later, upon graduating from Oregon State University, he moved to Arizona to work as a volunteer for nonprofit Volunteers in Service to America, on the Gila River Indian Reservation, which lays south of Phoenix in Pinal and Maricopa counties. Teegarden then stayed in Arizona for the next 30 years, where he was an administrator in health and human services, including 11 years as the executive director of Communities in Schools, in Pinal County.

In 2007, after his youngest daughter graduated from the University of Arizona, Teegarden and his wife, Kathleen, moved to Spokane to be closer to his elderly in-laws. He managed a law firm office as well as the Northwest Neurological office in Spokane before starting with Communities in Schools, located at 104 S. Freya.

The Journal recently sat down with Teegarden to talk about his work in public service and what he will do next.

How did you come to work in the nonprofit service sector?

The ability to do advocacy and help kids is really one of the most meaningful things you can engage in. You go home at night and think, you know, we might have helped some kids today.

All the other jobs I’ve had, I didn’t have that level of satisfaction. I was making money for a company—nothing wrong with that, because we also need that money to help kids too. But, at the end of the day, it’s a lot easier to make money than it is to help the kids we work with. Singlehandedly, I have made hundreds of thousands of dollars in my life and handled $10 million budgets. I’m pretty pleased that this year, Communities in Schools will have assets of $1.7 million to be able to do the work we are doing.

You’ve worked for this organization before in Arizona. How has it been returning to it once more?

It has been a really great experience for me, because this is really where my heart is—trying to develop strategies to help kids and trying to bring everybody else together who wants to help kids. Washington doesn’t do really well with kids in terms of national comparisons in all kinds of indicators. Prior to the pandemic, we had one of the worst chronic school absenteeism rates in the country. And we were number 46 in the United States in terms of residents who graduated from colleges. That puts us down there with Mississippi, Louisiana, and Idaho. People find that hard to believe, because we have all this tech work here, but they forget that people with a lot of education move here to take those jobs. We’re not growing a highly educated workforce.

Since the pandemic, children have suffered enormously. When they shut down the schools, we knew that was going to be the outcome. I contacted a lot of elected officials and other people to express my concerns, and nobody had a plan for children because we don’t make children a priority in the state of Washington. Those are facts. The data proves it.

Schools are doing their best. The problem is, these are not just school problems. These are community problems. And that’s why Communities in Schools tries to reach out to the community and identify resources and partners that we can bring to the schools where the children are and help them.

What types of partnerships have you developed?

One good example is the Tooth Savers program. What Tooth Savers does is, they come to the schools and put sealant on kids’ molars, so they don’t get as many cavities. And they do it right in the school with parental consent. When we started partnering with them, they ran between six and 12 schools. Today, they are in 120 schools in Eastern Washington. Those are schools that have primarily free and reduced school lunches. But that is what can happen when we partner to help children.

In terms of being able to magnify our efforts, we have great partnerships with Second Harvest, Spokane Valley Partners, and HRS Ministries. They donate food and other things to us.

Financially, what does the organization project to take in this year?

Because of the pandemic, for the past two years we’ve received about $1 million of in-kind donations, such as food and hygiene supplies. Our cash revenue was more like $1.4 million, but on the books, because we have to include in kind, it looks like we’ve made north of $2 million. This year, we project cash revenue of about $1.7 million. And one thing that we are really proud of is we only use 7% of that for administration costs. Which is crazy because almost nobody can do that. And another 14% goes to fundraising.

Most people want to give money and support a nonprofit that spends between 70% and 80% of revenue on the actual program, which is what we do.

We’ve gone from having an annual budget of about $300,000 to the projected $1.7 million it’s going to be this year, plus some reserves. We have a very frugal operation. We never pay full price for anything. Avista donated our computers, and when we needed new ones, I called them up and asked, “Hey you got any more of those computers laying around?”

I also negotiated the rent for our headquarters. They had an asking price, and I had a paying price. It’s a shameless business but you never know if you don’t ask.

You’re taking a long time to train Debra Raub before stepping away, what is it you most want her to learn?

I’m always willing to share with her all the mistakes I’ve made so that she doesn’t have to make them as well. I also think some of her problem-solving skills will dovetail nicely into some of the more technical aspects of this job. For example, we have a lot of risk-management issues as a nonprofit, and I have a lot of experience with that. After all these years, I just know how to assess risk. I want her to feel like she’s got it before I leave. A lot of nonprofits have failed because they did not know how to assess risk.

For example, at our Blue Jean fundraiser at The Rockin’ B Ranch in May, we will be serving people alcohol and then putting them on mechanical bulls, right? It’s all clean fun, but we put a lot of brain cells in assessing all the risks involved in these things.

Before the pandemic, we had 500 mentors, everyone had to have a background check and a reference check too. This business is a tricky business. I think the board recognized that there is a lot to it. They knew Debra is smart enough to do it, and, if we took a year, we’d be able to pass that knowledge along to her. It’s pretty unusual to take a whole year, but it’s pretty strategic thinking on the part of our board.

You said you aren’t retiring fully, just stepping away from this role. Why is that?

Part of the thinking is nonprofits benefit from a change in leadership. I think I’ve brought as much as I could bring to this. Because the nature of who we support and the people who have stepped up to help are younger also, sometimes my views are not in keeping with the prevailing views of the people who are interested in helping us. So that’s something that is driving my decision, what is in the best interest of the organization?

There’s a lot of interesting jobs that have already come my way. There are several nonprofits that need help with a variety of short-term and long-term problems. So I might do some consulting or something like that.

Or sell auto parts. I’m an old car and motorcycle guy. I also like to prospect for gold with a metal detector. I have those kinds of hobbies.