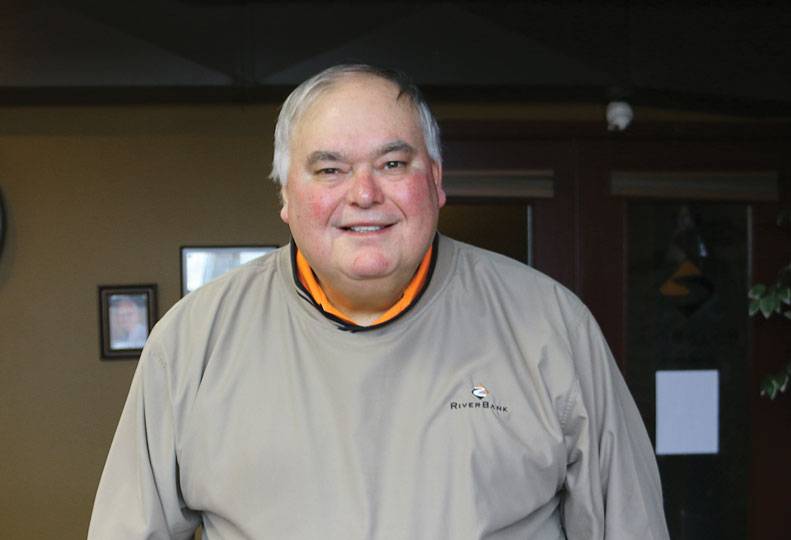 Dan Byrne is thoroughly a Spokane man. Born and raised in northwest Spokane, with a degree in accounting from Gonzaga University. Byrne started his career in the accounting world, at the now-defunct national firm Coopers & Lybrand LLP.

In the early 1980s, Byrne caught wind of a small startup bank, called Sterling Savings Bank. He didn’t have banking experience, but Byrne was told the bank’s founders were excellent members of the community. At Sterling Savings Bank — which grew to be one of the largest banks based in Spokane — Byrne became the bank’s chief financial officer.

After some 30 years at Sterling, Byrne was invited in 2013 to join the fledgling RiverBank, at 202 E. Spokane Falls Blvd., and soon became CEO. He was in that role until Dec. 31, when he retired. Byrne will remain on the bank’s board of directors through July.

What was it like for you to go from Sterling, one of the biggest financial institutions in Spokane at the time, to newcomer RiverBank?

It was an interesting transition. At the end of my career at Sterling, I was used to having a lot of talented people who could be delegated responsibilities to do different things. We didn’t have that capability at RiverBank, so I ended up wearing a lot of hats.

The other big adjustment, besides not having some of the people in place, was the way this bank does its banking. It’s quite a bit different than a lot of other banks. It has a single location. It has the business model of going after just businesses, professionals, and people in the business community. It really doesn’t have a consumer segment. It was a little bit of a culture shock, because I was expecting the transition to be a little easier to identify who our customer base was and how we would promote ourselves to increase our business activities.

Part of my job was to finish cleaning up the bad loans and trying to preserve the capital base that we had. I wasn’t here at the time, but (the recession) was a bit of a tidal wave that hit this bank, because they started up in late 2006. They went gangbusters making lots of loans, and unfortunately, when the credit cycle burst, they were caught holding the bag with a lot of properties that turned out to be more or less bad loans. But they maintained their capital position pretty well. As a consequence, they muddled around for a couple of years.

It took a period of probably six to nine months for people to realize just how bad it had become.

Sterling had started the process of creating a special unit to deal with delinquencies and problem accounts. Initially, they did a pretty good job of figuring out what the problems were. The resolution of some of that was really taking a hard line with our borrowers, and some of our lenders didn’t like that. We ended up having these internal battles over what was the best way to deal with a customer.

In some cases, we had to relieve people of responsibilities because they were getting in the way of fixing problems. That was tough. We tried to reposition some of those people into other roles, because we wanted their institutional knowledge. But in some cases, the friction was so bad they just couldn’t do that. I think this bank went through a little bit of that before I got here.

What’s the biggest change you’ve seen over the years in Spokane’s financial industry?

There’s a couple. One is that financial institutions generally have consolidated and gotten much bigger. As a consequence, the influence of the local community doesn’t mean as much as it used to.

The other thing that I’ve seen is that good, quality bankers in the 40- to 50-year-old age range have kind of disappeared. For many years, almost every bank had a bank trainee process. About 25 years ago, as some of the mergers started to take place, there were too many bankers in the industry at that time. People were being displaced. Training programs ceased to exist. There hasn’t been the re-adoption of a training program within banks.

Dodd-Frank (Wall Street Reform and Consumer Protection Act) tried to correct a little bit of that, but the reality is that so many of the larger banks are churn-and-burn institutions when it comes to people. They’ll bring them in and see if they fit, but they have to fit within their system, and if they don’t, then they’re gone.

What’s one thing you wish you had done differently in your career?

When I came here, I knew I was going back to an organization that, size-wise, was like Sterling when I joined them in the early 1980s. I knew I wasn’t going to have all the people around me with the expertise that I ultimately developed when I was at Sterling. I had to bring resources that were outside of the bank, because the people here hadn’t been exposed or hadn’t dealt with the issues that I had dealt with. Sometimes, I could use internal resources, but many times, I ended up having to do it myself.

If I had one thing to do over again, I would have spent more time in other committees where I wasn’t the expert, to gain some of that expertise.

You’re going to stick around as a director on RiverBank’s board — aside from that, what’s next for you?

I’m still active on some nonprofit boards. I’m on the Frontier Behavioral Health board and have been for 20 years. That’s something I feel passionate about. I’m active in the Knights of Columbus on the north side of town and active in my parish.

The last couple of years, because of the small staff that we’ve had, I’ve foregone some of our summer vacations to visit people. We’ve had a lake place north of Spokane that we visit a lot in the summertime, but the extended trips to visit relatives in Montana and elsewhere have been put on hold for a couple of years. I’d like to rekindle some of that.