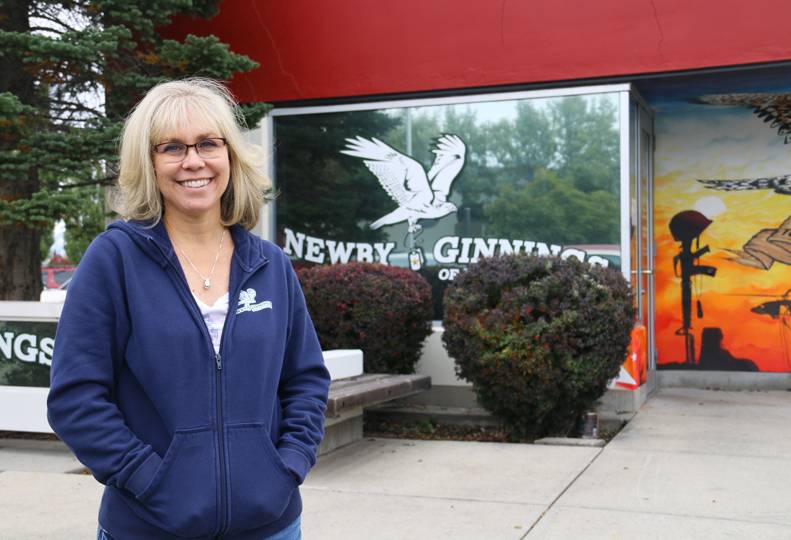 -—LeAnn Bjerken
Theresa Hart founded Newby-Ginnings of North Idaho after her son, Nicholas Newby, died while serving in the Idaho National Guard in Iraq. The nonprofit is now 5 years old.

Newby-Ginnings of North Idaho founder Theresa Hart is following a path she says is guided by her late son, Nicholas Newby, an Idaho National Guardsman who was killed while serving in Baghdad in 2011.

“I believe he’s beside me, helping me to follow this path because I couldn’t have done it alone,” she says. “I never planned for this to happen, so from the start, it’s been me responding to this need I saw in this community.”

Since its start five years ago, Hart says Newby-Ginnings has helped over 2,500 veterans, active servicemen and women, and Gold Star families. Gold Star refers to those who have lost family members in military service.

“We’re approaching 3,500 people enrolled in our program,” she says. “We’re only open three days each week, but we see an average of over 1,000 visitors a month. Last year, we had about 11,000 visitors sign in, and this year we expect to beat that for sure.”

Newby-Ginnings occupies 9,000 square feet of space in the Riverbend Commerce Park, at 570 S. Clearwater Loop, next to the Greyhound Park & Event Center, in Post Falls.

Hart says the space, which the charity leases from Jacklin Land Co., includes administrative offices, a library, a small food pantry, a big room with most clothing and household essentials, an infant and toddler room, a medical supplies room, one room of miscellaneous items, and 3,400 square feet of warehouse space adjacent to its rear sorting and donation area.

Hart estimates the charity sees an average of about 100 visitors every day it’s open and it enrolls at least 10 new veterans a week.

“We’re a veterans’ support program, so it’s free stuff but it’s not a free for all,” she says. “We provide these items to veterans and their families. All they need is a government-issued identification card proving their military service.”

She says the organization strives to ensure those with the greatest need are prioritized, but visitors can return as often as needed, and there are no minimum income requirements.

Hart says Newby-Ginnings has an annual budget of $100,000, and its operation relies entirely on donations and fundraisers throughout the year.

Newby-Ginnings doesn’t receive government or grant funding, she says, adding, “People who want to help can do so by volunteering or donating, whether that’s with items or monetary donations, all are appreciated.”

The charity works with over 40 sponsors and participates in fundraisers year-round, including two golf tournaments; the Dan Kleckner Veteran’s Benefit Golf Tournament and the Inland Northwest Heroes Memorial Golf Tournament.

Hart says Newby-Ginnings has about 60 regular volunteer workers, and an eight-member board of directors which meets monthly.

She emphasizes that Newby-Ginnings isn’t just a store, but also a place where veterans and their families can connect with resources and referrals to other agencies.

“I see us as a hub at the center of a wheel where people come for their basic needs,” she says. “If they need help with other things, I can send them out to other contacts or resources on different spokes of the wheel to find a solution.”

Hart says Newby-Ginnings accepts a variety of household and personal items, but all have to be in working condition and useful to its clients.

“We try to take in only things we know are needed and will be used,” she says. “I tell people to think of the kinds of items you’d need if you were moving into a new, empty apartment.”

She says furniture and appliances are always in demand, due to their high retail cost. Other items in high demand include kitchen utensils, towels, and linens.

Hart says the charity has established good relationships with the U.S. Department of Veterans Affairs and Goodwill Industries International Inc., which each have programs to help homeless veterans to find housing.

“Those programs are especially near and dear to our hearts,” she says. “We make a point to set aside more of the newest items for vets who have been homeless, because we feel they deserve that dignity after having been on the streets.”

Hart had been working as a developmental therapist for the state of Idaho’s infant toddler program, prior to losing her son.

“A loss of that magnitude really changes you, and I found I just wasn’t able to go back to what I was doing before,” she says.

During that time, Hart says Nick’s friends and battle buddies stayed in contact and would tell her about their own struggles with loss, as well as physical injuries, post-traumatic stress, and other challenges in readjusting to civilian life.

“I realized that starting a program that would help veterans and their families was something I could do,” she says.

Hart started Newby-Ginnings in 2013 in her home’s four-stall garage. She soon developed the charity’s articles of incorporation and established processes and systems needed to accept donations and sign up veterans for services.

Hart began the process of registering as a nonprofit in June 2014 and received approval just one month later.

Once the charity outgrew its space in her garage, it moved to a 1,700-square-foot industrial unit nearby, Hart says, but it soon outgrew that space as well and then moved to a 2,900-square-foot building in Dalton Gardens, Idaho.

“The Dalton Gardens location is what we consider to be our first true store,” she says. “We had a two-year lease there, but after a year, we knew we’d need to start looking for a bigger space.”

Newby-Ginnings has been in its current location for four years and although it could use additional space, Hart says the charity enjoys its central location and easy access to Interstate 90.

“Our lease expires in May, but if we were to expand, we’d need about twice as much space to make it worth the move,” she says. “The other issue is cost of rent, as we’re entirely dependent on donations and fundraisers.”

Hart says Newby-Ginnings plans to participate in several fundraising events this holiday season, including the Fairchild Air Force Base Operation Turkey Drop, which will donate a Thanksgiving meal to 50 families in need, and a similar program through Country Lock & Key Inc., which plans to donate about 100 Thanksgiving meals to veteran families this year.

“We also offer an adopt-a-family program during the Christmas season, which matches area businesses, organizations, or individuals with families in need of a meal, children’s presents, or other needed essentials,” she says.

“(The dealership) donated every other month’s radio ad to us, as well as the use of its four dealership sites as donation drop-off locations,” she says. “It’s been a great way to spread the word and offer people more drop off options during the week.”

Looking ahead, Hart says her dream for Newby-Ginnings is for the charity to have its own building.

“I envision a two-story building with shopping space on the first floor and administrative offices above with room for other veterans organizations to share space alongside us,” she says. “I’m not sure if it will happen, but that’s the dream.”