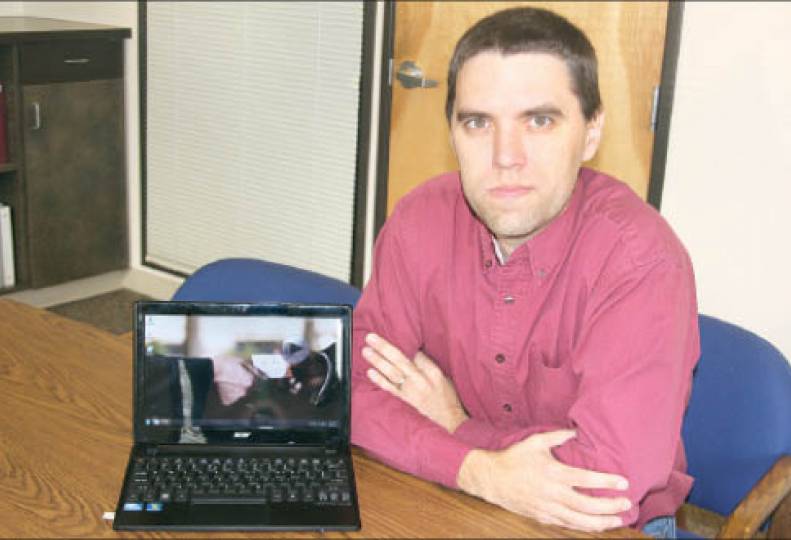 -—Staff photo by Jessica Valencia
IntelliPaper owner Andrew DePaula plans to start a Kickstarter campaign soon to fund some of the company's initiatives.

Andrew DePaula has managed to make paper smarter, thanks to a product he invented that combines the versatility of a USB flash drive with the low cost of paper.

He founded a company in Edwall, Wash., last April named intelliPaper LLC to market the recyclable flash drives, and says he expects the enterprise to grow rapidly as awareness of its products and their versatility grow among potential users.

"We feel that our technology has the potential to fundamentally change how we share information," he says.

DePaula says there were several reasons for starting the business in Edwall, about 40 miles west of Spokane, one of which was its easy access to the highway without dealing with city congestion.

IntelliPaper uses a small silicon chip that is sandwiched between two pieces of paper in such a way that it can be imbedded in a business card or advertising mailer. The user then simply can tear off the strip of paper containing the chip and fold it, which makes it thick enough to connect with the USB ports on computers. The paper product is similar in thickness to heavyweight cardstock when it isn't folded up into a USB plug-in shape.

Unlike a typical USB flash drive that can be loaded with content by the user, intelliPaper currently pre-loads the device with whatever data a customer desires.

For example, a company could have business cards made by intelliPaper with contact information and other materials preloaded onto the paper USB drive. The recipient could then fold the business card—usually they come with instructions on them—and download the information.

The company operates out of a roughly 10,000 square-foot office-and-warehouse facility that it leases in Edwall. It currently employs seven full-time workers, including DePaula, who says he hopes to grow that to 30 to 35 employees next year.

IntelliPaper only produces paper USB drives that have about one megabyte of onboard memory. The company plans to release larger capacity devices next year that will range between eight and 32 megabytes in storage capacity, DePaula says.

"We actually have a full-blown computer inside these pieces of paper," DePaula says.

Intended for short-term use, the paper thumb drive is guaranteed by intelliPaper for five uses. After that, the device is intended to be thrown out, he says.

DePaula got the idea for intelliPaper in 2008 while attending a conference. He says he went back to his hotel room and noticed his plastic nametag had a chip inside paired with a copper antenna that allowed anyone at the conference to be tracked. He took apart the tag, located the chip inside, and he says at that point it clicked for him.

"In that instant, I realized if they could do that, I could make a paper USB," DePaula says.

He says intelliPaper has several dozen clients, but hasn't pushed to grow its customer base yet, concentrating instead on solidifying its product. DePaula says intelliPaper markets more toward large companies and organizations than to individual consumers, but would like to branch out to retail soon.

IntelliPaper sells its marketing products from $1.15 to $1.50 per unit, depending on the size of the intelliPaper product. DePaula says the goal is to bring the cost down. Different products have different minimum order requirements, such as the business cards, which have a minimum order size of 6,000 cards.

"This is starting to be noticed," he says. "We expect to see some serious uptake in what we're doing."

DePaula hopes to add a greeting card line and make its products readable wirelessly, among other things. He says the campaign also will aid intelliPaper in launching a blank, writable square USB device.

"People want the ability to get a box of business cards that are blank, and put their own data on it," DePaula says. IntelliPaper plans on releasing blank, one-time use products like business cards with the help of money it raises through Kickstarter. Customers who want to load their own content onto a blank card, will need to use a data reader available through intelliPaper to upload the content when that feature becomes available. Products bought with pre-loaded content won't require the reader.

To make its products wireless, or readable without using a USB port, intelliPaper would rely on near-field communication, a technology that uses radio frequencies to transmit data from one device to another.

In this case, an intelliPaper device would be able to open up on a smartphone or other near-field-enabled device, without tearing off and folding up the USB, by just positioning the paper close to the device.

"You're connecting with the environment in a seamless sort of way," DePaula says.

Near-field communication, which is just starting to hit the market, is mostly available on cell phones and tablets, DePaula says. Laptops typically don't come with a wireless reader, but generally do have a USB port.

"There really won't be any computerized device that won't be able to interact with our intelliPaper," DePaula predicts.