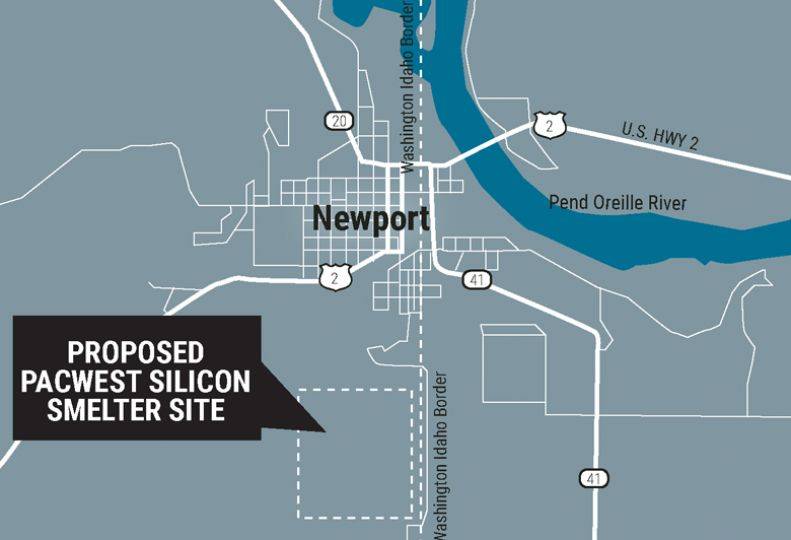 A Canadian company’s proposal to construct a silicon smelting facility on a 188-acre site about 1.5 miles south of the town of Newport, Wash., has caused a rift in the community of about 1,200 residents.

PacWest Silicon, a subsidiary of Edmonton, Alberta-based HiTest Sand Inc., began searching for potential sites in northeastern Washington about two years ago. Initially, the company was eyeing communities such as Usk and Addy before deciding in October 2017 that Newport, the county seat for Pend Oreille County, was a more suitable location for its $325 million silicon smelting facility.

Since then, separate groups supporting and opposing the big development have organized. Yard signs throughout the Newport area that promote both stances illustrate how pervasive the debate has become there.

A group of citizens came together in late fall of 2017 to voice their opposition to the smelter and attempt to prevent it from being built in Newport. Citizens Against Newport Silicon Smelter (CANSS), a 501(c)3 nonprofit, is led by chairman Michael Naylor, who says he owns 20 acres of property close to the proposed site. The Pend Oreille County Public Utility District and Pend Oreille County government engaged in “backroom deals,” Naylor alleges, and were not forthcoming when asked questions about the proposed smelter.

“We just couldn’t get any answers from anybody. The answers we did get were riddled with lies and deceit and untruths,” Naylor claims.

Representatives of the PUD and Pend Oreille County could not be reached immediately for comment.

On the other side of the controversy is a group called Friends and Allies of the Newport Silicon Smelter (FANSS). John Gentle, who handles social media for the group, says the group initially came together to “debunk a lot of the myths that were going around.”

Jason Tymko, president of U.S. operations for HiTest, says due to the energy-intensive process of smelting silicon, finding a site that could access cost-effective energy was important.

“In that northeast region of Washington, there’s an abundance of hydroelectricity and some of the best rates in North America,” Tymko says.

Access to infrastructure, geological features of the site, and air dispersion patterns were among dozens of factors the company considered, Tymko says.

The Washington state Department of Ecology announced this week that it will conduct an environmental review of the smelter and is seeking public comment until Oct. 11 on what to include in its study.

CANSS, which is primarily concerned with the Idaho side of the Washington-Idaho state line near which Newport is situated, partnered with its Washington counterpart, Responsible Growth NE Washington, in early June to file a lawsuit in Spokane County Superior Court against Pend Oreille County, the PUD, and HiTest Sand. The complaint, which has not yet been assigned for adjudication, alleges that one of the four parcels of land within the proposed smelter site was sold illegally to HiTest.

Phyllis Kardos, co-chairwoman of Responsible Growth NE Washington, says while the other three parcels were properly sold to the PUD by the county after being declared surplus, the smallest parcel was not declared surplus or advertised as such before it was sold to the PUD. The parcel in question is bordered by State Line Road; the other parcels have no road access.

“They were so anxious to put these pieces together so there was a better access … that they neglected to go through the proper steps and process of declaring it surplus. Pend Oreille County sold it to PUD, and then immediately PUD turned around and sold it to PacWest,” Kardos claims.

The location of the proposed smelter site is not zoned for industrial activity, Kardos says, referring to the Pend Oreille County table of permitted zoning uses. Kardos says the site is on county public land, which cannot be used for industrial purposes.

“What the county is trying to do now is to bundle all of their public land and rezone it; that’s not really a very good idea,” Kardos says. “This land was sold to them with this knowledge that it was not zoned for industrial use. Why did they buy it when they knew they couldn’t build on it?”

Tymko says the site originally had been zoned for a PUD gas-fired power plant. Pend Oreille County is now in the process of rezoning the site, he says, along with several other parcels of land.

“Just through the way things sometimes happen in small towns, when they decided to surplus the land, they changed the designation, so now one of the steps is just going back to change it back to its original designation,” Tymko says.

Tymko says that the proposed smelter has put an unexpected strain on county agencies.

“That community is not used to companies of our size, and they were in the middle of refining their processes as well. We put a test on their capabilities, not that that was our intent,” he says.

Among the contentious points surrounding the proposed project is that of jobs.

While PacWest has stated that the smelter will create about 150 new jobs—not counting spin-off jobs and businesses created to support the smelter and its employees—some question where employees will come from.

“There are jobs (in Newport) now that aren’t being filled, and one of the reasons they’re not being filled is they can’t pass a drug test,” Responsible Growth’s Kardos says. “To say 170 workers are coming from Pend Oreille County is basically a lie. We don’t have those people with those skills that they’re going to need.”

In the FAQ section of its website, PacWest says it will “bring in 10 to 12 industry experts to train the local labor force for one to two years.”

Gentle says that the jobs the smelter could provide would be vital to Pend Oreille County, which has an unemployment rate of 6.4 percent. One of the largest employers in the county, Ponderay Newsprint Co. in Usk, is also owned by a Canadian company.

Gentle claims that due to the changing nature of media, the paper mill is unlikely to remain a stable source of jobs.

“That’s too many eggs in one basket, as far as I’m concerned, and frankly, that basket is not a good basket to be in,” Gentle says. “It would be foolish not to have another primary business lined up.”

In theory, Gentle says, if the paper mill were to close, it would prove to be disastrous for the area absent of any other industry. Ponderay Newsprint Co. has stated repeatedly that it has no plans to close its Usk mill.

Another member of FANSS, Alana Wallace, says her experiences with steel smelting facilities have convinced her that jobs created by the proposed smelter would provide invaluable experience for local residents.

“These aren’t minimum-wage jobs; these are skilled positions that a kid just getting out of high school can start in and learn the skills and really elevate his learning potential and his ability to do certain crafts,” Wallace says. “It’s more than just providing minimum-wage jobs; it provides careers for people and allows multiple generations of people to work at a facility and become middle class citizens.”

Environmental concerns have also been a point of contention. PacWest says that 50 percent of refined silicon from the plant would be used for creating solar panels. Kardos claims that the carbon footprint of the facility is too large to offset the potential environmental benefits of creating solar energy products.

Gentle says the environmental arguments against the smelter by CANSS and Responsible Growth NE Washington are misleading.

“When people are throwing around large numbers, it can sound alarming,” Gentle says. “The fact of the matter is, there are really no less than four or five or six agencies who are responsible for things like this. They’ll tell us if it’s not safe or if it’s not.”

Having a silicon smelting facility in a place that uses hydroelectricity, as opposed to a state that uses coal, also helps to offset any environmental damage, Wallace says.

“If this plant was going to be placed in a state that primarily uses coal-fired power or other nonrenewable sources compared to Washington, which uses almost completely renewable sources, the amount of coal required to produce that power is in the billions of pounds,” Wallace says. “The amount of emissions and coal consumption that’s being saved by having this facility in Washington is huge.”

Tymko says “numerous” state and county agencies are currently in their various review and permitting processes.

“We’re already probably about six months behind what our initial projected timeline was; a lot of that comes from not so much our energies and our effort, but some of the agencies we’re working with,” Tymko says. “We believe they’re working very diligently and to their best energies to get it done in a reasonable period of time.”

Tymko says PacWest is looking at a six-month window in 2019 in which to begin construction, but due to the nature of the process of receiving full approval from all involved government entities, construction could be delayed until 2020.

Comments on the project can be submitted to the Department of Ecology through the department’s website. Four public meetings will also be held: Sept. 18 at the Spokane Convention Center; Sept. 19 at Newport High School; Sept. 20 at the Priest River Event Center; and Sept. 27 through an online webinar.

More information can be found on the Department of Ecology’s website at ecology.wa.gov.