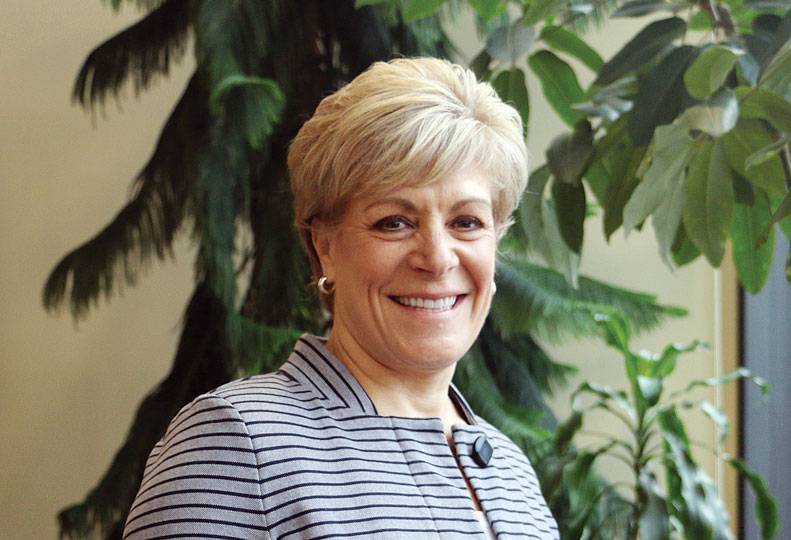 Carla Cicero was born and raised in Los Angeles, where her credit union career began in her teenage years. In 2011, she came to Spokane from a Wisconsin credit union to become president and CEO at Spokane Valley-based Numerica Credit Union. Cicero says she’s spent her career at credit unions because she enjoys their cooperative, nonprofit nature.

During Cicero’s tenure at Numerica, the credit union’s total deposits in Spokane County have grown from about $632 million to $1.37 billion, as of Dec. 31, 2020.

The Journal spoke with Cicero about her history with credit unions, how Numerica has changed since she arrived, and how she handles challenges like the COVID-19 pandemic.

How did you initially get into the financial industry?

I started in the credit union when I was 17, after graduating from high school. It was a tiny credit union at my mother’s work. That was in 1977.

At 17, who knows what you want to do in life. I was going to college for beef husbandry, and I thought I wanted to own a ranch. When I was about 22 years old--I was already married and had a child--I looked around and observed what the CEO was doing at the credit union that I’d moved to. I thought that would be an interesting job. He got to do a lot of traveling, and I thought that would be pretty glamorous.

I knew I had some innate leadership ability. I set a goal for myself that I would make it by the time I was 35. I had some mentors at work, and I started checking off the things that I needed to learn and develop in order to become a CEO. Fortunately, I had a very good friend who was ahead of me in her career, and she taught me a lot of the do’s and don’ts along the way.

I moved from that credit union to another credit union to become a vice president of credit when I was 27 years old. It was there I declared to my boss that I needed to go back to school, because once I was done getting my degree, I wanted to interview for CEO positions. Fortunately for me, he was willing to do that and paid for my education so that I could get my undergrad degree.

I graduated in 1991 and then started looking for CEO positions. I landed my first one in Oshkosh, Wisconsin, when I was 32, three years ahead of my goal.

Who have been your role models?

I’ve had several in my career, but I have to say my parents were foundational. My mother worked after my youngest brother went to school. She took pride in her work. She loved the independence of having her own money to spend. They always worked really hard. They never called in sick. They just had a really strong work ethic. That laid a foundation for who I became.

Along the way, I had mentors. I have a really good friend who still, after 40 years, is a friend of mine. She was supervisor before me, vice president before me, so she was able to mentor me along the way.

I had a boss that I really admired. He moved from banks to credit unions and was my boss at Lockheed Federal Credit Union. He taught me a lot about being a good leader. I always felt like if you watch what others do, you learn what’s effective and what’s not effective, and then you can chart your own path.

I was very fortunate to have really good role models in my formative years as a CEO. After I became a CEO, those I worked with taught me a lot about how to be better and continue to hone skills.

In the time you’ve been at Numerica, what’s the greatest change you’ve seen?

The previous CEO and I have very different leadership styles. His leadership style was more of command and control, because that was his generation’s style. Mine is much more participative. So, moving an organization to one that is collaborative, that sets the guardrails with regard to team members’ work and allows them to take it to the greatest potential, has been a beautiful thing to watch.

When my team members do things for the community or for our members, I sit in awe, so often. It’s tremendously more than I could have imagined.

I think the greatest challenge that we’re facing is the uncertainty of what will happen as we continue to move through COVID. We’re really well prepared, but there’s a lot of things we do not know yet. How many businesses in our communities will actually not reopen their doors?

One of my things is thinking about worst-case scenarios and helping us think through those things early. We started thinking about this type of event--it wasn’t a pandemic, but it was an extreme economic event--about three years prior to the pandemic hitting. We looked at all different types of scenarios and what we would do in each case. We moved in the direction we needed to move in order to keep our branches open and keep business as usual while responding to the changing needs.

Where do you see Numerica going in the next few years?

We’re beginning to think about and reimagine what Numerica’s next five-year goal is going to be. I know that it will involve growth. It will involve continuing to evolve our products and services to meet the changing needs of our members. It will continue to involve spending time working on the culture at Numerica in order to help our team members thrive in changing environments.

One of the things the board told us when we set this last five-year goal was that they’re so proud of Numerica and all that we do for our members and our communities that they want more people to experience the Numerica difference. Their goal for us, at the time, was to double in size. And we all thought, whoa, that’s a big order. But in June of 2020, we actually surpassed the five-year growth goal 18 months ahead of schedule. We’re pretty proud of that.

What are you reading lately?

I’m reading Only the Paranoid Survive, by Andrew Grove. He used to run Intel. We’re reading that as a team. We read each chapter, and then we talk about it on my (executive) level to try to figure out what we can learn. Are there any nuggets of wisdom we can pull out of that for Numerica?

I do a lot of spiritual reading. One of the things that’s a great gift to me is learning how to meditate and to relax and refocus my thinking. I like to say I have a monkey mind. It jumps around all the time. Doing that kind of self-help studying in order to get better and better at calming and opening up my mind and being able to stay more focused on the things that are important.