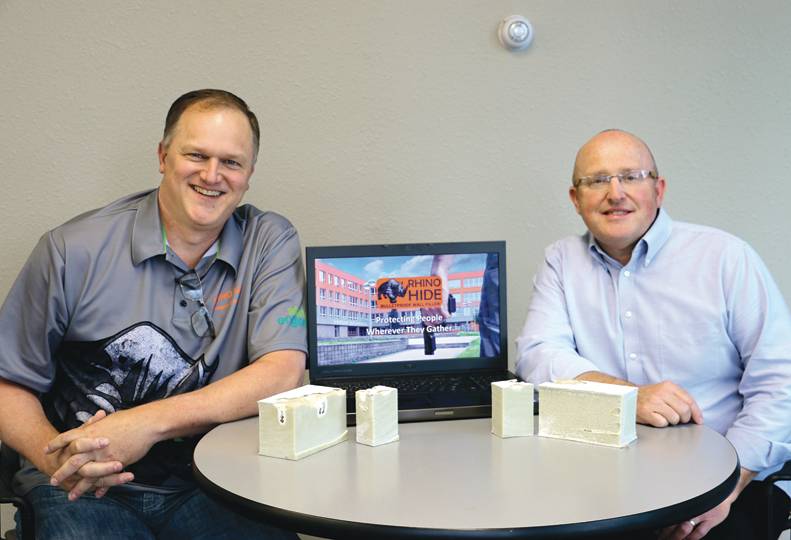 North Idaho-based aerospace engineer Jason Giddings says he’s invented a product that could help save lives in the event of a school shooting.

Giddings started Rhino Hide Inc. last year, and since then, he’s been working to perfect a bullet stopping  wall filler product and used early funding to establish an office and distribution center, he says.

So far, Giddings is the company’s CEO and only employee, although his friend David Rogers serves as business adviser.

Giddings says the company plans to start by marketing the product for use in private and government buildings and community shelters.

“Depending on how long our patenting process and certification testing takes, we could potentially be ready to sell the product in the next four months,” he says.

The product can also be marketed for use by police departments and the military, he claims.

“This product is something you’ll probably start to see in things like government buildings, and businesses like convenience stores first,” Giddings says. “We also see a lot of interest from private homeowners who want to create their own safe rooms.”

Rogers adds, “We’re working to gain some visibility through other individual projects first. Schools will probably be a more difficult market to get into as those projects require special approval and funding sources.”

Giddings says Rhino Hide wall filler is made up of a special blend of polyurethane and other aggregate materials. The filler is mixed and then poured into wall sections, where it hardens and becomes bullet proof.

“The process involves mixing the filler, cutting a hole in the top of the wall, and pumping it in,” he says. “The material shrinks slightly as it dries, so we line the wall with plastic first to protect interior frames, wiring, and plumbing. Then we fill it in two-foot sections to ensure it doesn’t put too much pressure on the wall as it dries.”

He says the process of filling a wall can take about a day.

“Almost all other products would involve building a shelter within the room or taking apart the walls in order to incorporate bullet proof material,” he says. “Our product … can be retrofitted to existing walls, saving space and making it a more cost-effective option.”

Giddings says he’s mindful that school shootings are a politically charged issue that is top of mind for many people.

“Obviously, we didn’t set out to be making a profit on bad situations, and we want to be sensitive to the fact that this is a controversial topic for a lot of people,” he says. “We view our product as being similar to airbags or life vests. It’s a safety tool that we believe could provide a real, unbiased solution to this problem.”

Giddings says this method of bulletproofing walls would help protect students without having them leave their desks.

“Having to lead students into a shelter takes away from valuable reaction time,” he says. “With bulletproofed walls, students can remain in their seats while the teacher secures the door and they wait for law enforcement to arrive.”

Giddings says the company started its funding campaign with equity crowdfunding site StartEngine in June 2018, which has attracted about 610 investors and raised just over $300,000 so far.

“Our first campaign will be ending later this month, but we hope to start a second campaign soon to reach our goal of $1 million in funding,” he says.

Rogers explains that equity funding — Rhino Hide’s method of startup funding — is a bit different than obtaining funds through Kickstarter or Indiegogo campaigns, which reward participants with products.

“This essentially enables less-sophisticated investors, who have fewer funds, the option of gaining partial ownership in emerging startups,” Rogers says.

The company already has some funding to purchase mixing equipment and begin retrofitting a 2,800-square-foot office space at 516 Larch, in Sandpoint.

“The first steps will be getting our official product patent in place and getting the product certified as bulletproof through an independent tester,” he says.

Giddings and Rogers say, while Rhino Hide isn’t yet making a profit, it does have upcoming projects in the works that are expected to help launch the company into the marketplace and bring in revenue while it works to ready the product for distribution and develop its network of certified installers.

“We’re working on a project with a Fortune 500 company that has a factory in an area of St. Louis that has a lot of gang-related activity,” Giddings says. “The factory walls are thin, and they’re concerned for their workers’ safety. That project would involve up to $400,000 worth of product, so we’re excited to see that materialize in the next few months.”

He says another upcoming project will be for an undisclosed company in Texas that’s working with the U.S. Border patrol to build about 4,000 small, mobile shelters.

“From what I understand these shelters would include bunks, bathrooms, and equipment for launching drones, basically a place for them to regroup without needing to return to base,” he says. “That project will probably take up to three years and involve about $7 million worth of product.”

Giddings estimates that if Rhino Hide is able to build a network of 300 installers that are able to complete one installation each year, that would equal about $75 million in annual revenue for the company, and around 300 new jobs, 150 of which would be local.

Giddings says the company’s Sandpoint facility eventually will include offices and two mixing stations capable of mixing 1,200 gallons of wall filler per day. He says the company plans to sell the product at a price ranging from $35 to $50 dollars per gallon, depending on the strength of the materials used.

Giddings says he initially tried to find a manufacturer to mix the product but hasn’t had any interest yet.

“I’d hoped to find a partner to take on that aspect, but I have experience in manufacturing so I’m not afraid to start out making it myself,” he says. “There’s a certain value in doing it this way, such as having quality control and a greater understanding of the product itself. Once we’re a bit more established we can revisit the idea of having an outside manufacturer take over.”

Giddings says he’s already built smaller sections of wall that include the various blends of the material and tested it by firing at it using several different types of firearms including an AR-15 rifle and a shotgun.

“All of my initial tests show that it works, but we do plan to have it tested by independent tester Oregon Ballistic Laboratories soon,” he says. “Our goal is to be certified bulletproof UL752, Level 8, which would mean it could withstand some fairly powerful rounds, similar to those you’d use hunting elk or deer.”

Giddings, an army veteran and serial entrepreneur, with a degree in aerospace engineering, started his own company, Giddings Product Development in 2006.