Riverfront Park plan, financing are up for vote 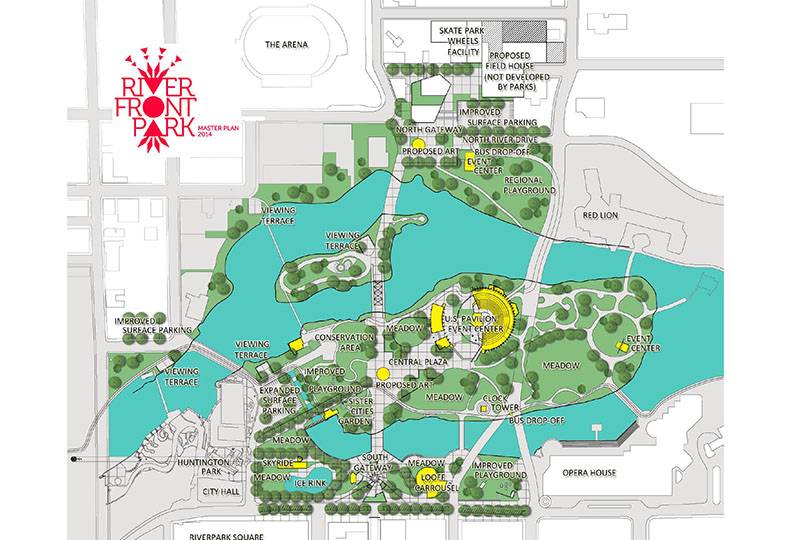 Spokane Park Board members will meet next week to deliberate and vote on the $60 million master plan as it exists today and a finance package to renovate Riverfront Park that, if approved, will go to the Spokane City Council for approval before it can be placed on the ballot for a vote in November.

Spokane voters will likely be voting this fall on two ballot measures—one a bond to implement the Riverfront Park master plan, and the other as a levy to pay for city streets improvements and repairs.

The funding items for parks and streets must be voted on separately because together they would violate the single-subject rule for ballot items. Additionally, the Spokane Parks funding package is a proposed bond, while the street package is a proposed levy. A bond requires supermajority approval of more than 60 percent, while a levy requires simple majority approval by more than 50 percent of voters, says Marlene Feist, city spokeswoman.

The complex plan of refinancing existing debt would generate $80 million—footing the bill for the $60 million River Park master plan and paying for an estimated $20 million worth of street work.

Under the street levy, citizens would continue to pay the 57 cents per $1,000 of assessed property value that they pay today and no new debt would be incurred. Under that proposal, an average of about $5 million a year would be spent on new street projects. As envisioned, levy proceeds would be leveraged with utility money, and state and federal funding sources, to gain about $25 million annually for needed street work. The levy also would cover the remaining debt owed on the 2004 Street Bond. At the end of 20 years, there would be no remaining debt.

Leroy Eadie, director of the city’s Parks and Recreation Department, says he’s confident about the proposal after a recent all-day retreat and discussions.

“I think (the board) is very positive about the proposal, and I think they are pretty strong and positive in moving forward to recommend the proposal to the Spokane City Council,” Eadie says, adding that the board will still hear public testimony during a June 12 meeting at City Hall.

The new plans for the U.S. Pavilion structure would cost $24 million and would include renovating it into a multipurpose event center, installing interactive and multimedia art and storytelling features, and setting up new public art.

The Looff Carrousel would be improved under the proposal, adding accessibility for people with disabilities and expanding the space to accommodate special events, at a cost of $4.5 million.

The proposal cites another $2.8 million for public safety and improved access, which would pay for the installation of security cameras and emergency phones, as well as improved drop-off zones for vehicles, expanded and improved parking, and additional security patrols. It also would pay for improvement and repaving of two additional parking lots.

Another $2.2 million would pay for relocating the ice rink, which currently is located inside the Pavilion, to the southwest corner of the park next to the Skyride, which also would be improved under the proposed plan. The Skyride facility and the ice rink would share concessions, ticketing and lockers, and the plan would create new outdoor seating for recreational users.

At a cost of $2 million, new leasable shelters would replace existing shelters on Havermale Island and on the north bank of the park.

A contingency reserve of $4.5 million would be set up under the plan.

In June 2013, a 20-member advisory committee started to develop details for the park’s master plan detailing uses and estimates of related costs, after the Spokane Park Board approved the first phase of the master plan in 2012, outlining general concepts. The advisory committee submitted its recommendations to the Spokane Park Board in late March.

City officials say the proposed changes to Riverfront Park are meant to pull people to the center of the city, increase visual access to the river, add to the number of events, create sustainable revenue, and protect natural resources and habitat.

Eadie and Feist have been working together to present the Riverfront Park master plan and the refinancing proposal to the community over the past several weeks. The public meetings have included information on the funding proposal, as well as the projects being proposed for Riverfront Park.

Feist says the feedback they have collected from forms during public meetings has been positive.

“We’ve gotten strong support on the questions we’ve asked,” Feist says. As of May 29, the city had received 52 feedback forms.

“The folks we’ve talked to seem to like the concepts.” Feist says feedback is running on average about 95 percent positive.

The Spokane Park Board will meet on Thursday, June 12, at council chambers in City Hall, to vote on the Riverfront Park plan and finance package. The city council is expected to consider the proposal in July. Feist says the council will need to adopt resolutions by late July, in order to meet the Aug. 5 deadline to get all of the information to Spokane County, which manages the election process.