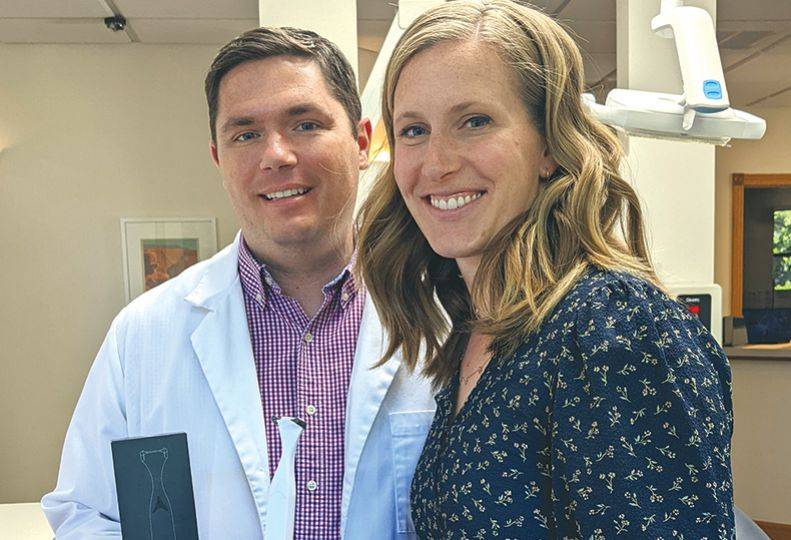 A Spokane-based company has raised a total of $800,000 in funding for an electric flossing device, which is awaiting patents, and the owners hope to begin sales of the device to consumers by fall.

The Slate flosser is a three-in-one device with a reusable flosser head, a tongue scraper, and silicone bristles to sweep between the tooth and gum. It includes an option for a flosser head specifically made to clean braces.

Snyder says she hopes to see annual revenue of up to $8.4 million, depending on how quickly the company grows.

Because dental offices were shut down for about two months in 2020 due to the COVID-19 pandemic, Danny Snyder had time to develop the Slate flosser.

“The week before the pandemic (restrictions) started, he took all of our savings and invested it into the product,” Brynn Snyder says.

In October, the Slate flosser launched on Kickstarter, where the flosser raised $194,000, she says. Slate sold 3,500 flossers in the Kickstarter round.

“We realized, once the Kickstarter was over, that to launch the product, we needed to have more funds to be able to order more product as need for it came about,” she says. “We used our connections in Spokane, and as I was looking, I found Spokane Angel Alliance.”

The company is having the devices manufactured overseas.

The Slate flosser retails online on Slate’s website for $79.99. A package of reusable floss heads is $20. Both currently are sold out.

“We will be putting pre-orders on our website in September, and then we’ll fulfill them as soon as we’re able,” Snyder says.

Snyder says the company has two models for growth, depending on how well the flosser sells.

The couple are currently the only employees at Slate.

“We’re looking to hire three to four new people,” Snyder says. “This round of funding will help us do that. Once we have product, then we’ll be hiring.”

Positions Slate will hire for will include marketing, sales, and design, Snyder says.

Snyder says the Slate flosser was well-received by dental hygienists who tested the product.

Snyder says that periodontal disease is a common dental issue in the U.S., especially among older people. It’s one reason that the handle of the Slate flosser is as bulky as a typical electric toothbrush, she says.

“Some people said, you could maybe make it skinnier, but we want elderly people to be able to hold it,” Snyder says. “They’re the people (most likely to have) periodontal disease, and the only way to fix it is to stimulate the gums, and to get the plaque and bacteria out of the neck of the gums.”