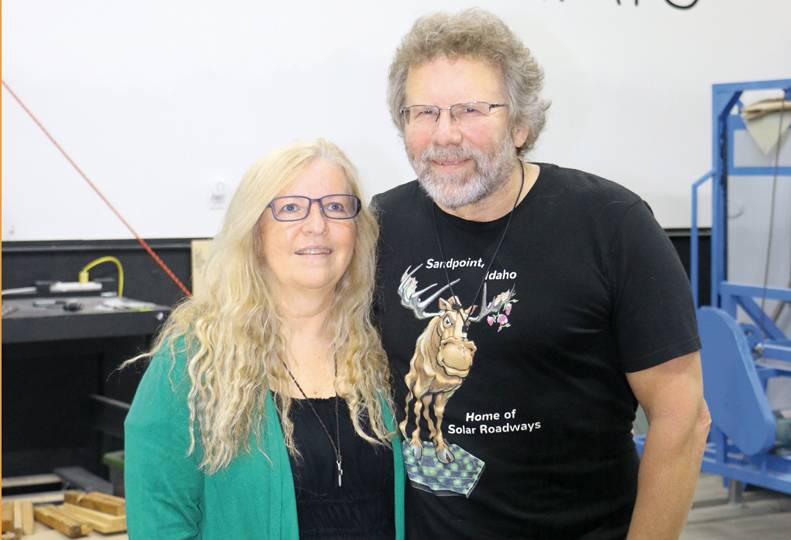 -LeAnn Bjerken
Julie and Scott Brusaw formed Solar Roadways Inc. in 2006 and have participated in a number of pilot projects as they’ve developed solar panels that can be installed in streets. 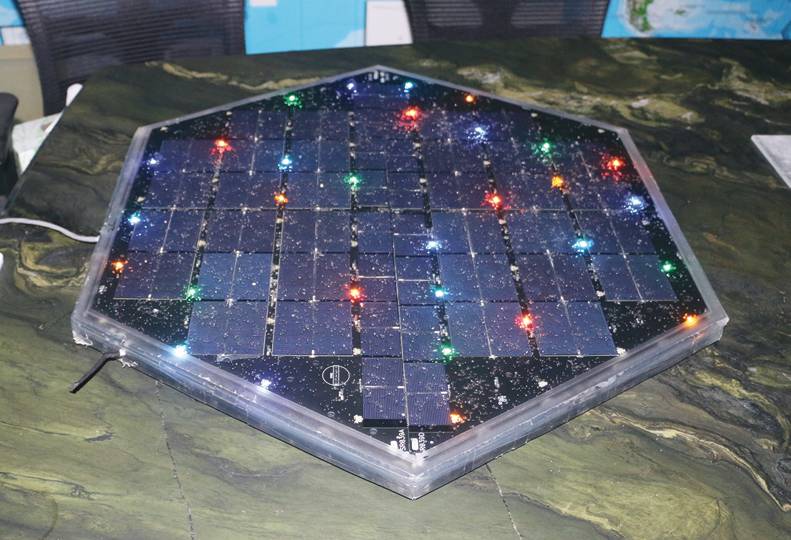 -LeAnn Bjerken
The Solar Roadways solar panels have a surface area of about four square feet. The company recently developed SR4 as the newest iteration of the panel.

Founded in 2006, the company designs and builds solar panels strong enough to be driven on that can be incorporated into roads, sidewalks, and driveways. In March, it released plans for its newest solar panel model, the SR4, at the Treefort Music Festival’s tech conference in Boise.

The company also recently completed its third U.S. Department of Transportation contract, which funded a series of strength testing of the panels at Marquette University, in Wisconsin.

Julie says Solar Roadways will complete a 36-panel public installation project in July in Baltimore, Maryland’s Inner Harbor, which hosts several restaurants, museums, an aquarium, and an observation deck. This is the company’s second pilot project. It’s an estimated cost of $72,000 and is being paid for by the Abell Foundation, as a gift to the city of Baltimore.

The company’s SR4 panels are designed to produce 55 watts, up from 36 watts for its first prototype panels. Each of the SR full-size hexagonal panels covers an area of just over 4 square feet.

“Currently, we can only make three panels a day with our prototyping equipment, and they are partially hand made,” says Julie. “Our goal is that a full line will make about 1,000 panels a day.”

Because the company has only completed pilot projects that are funded by donors willing to pay higher costs for production and installation, it doesn’t yet have an exact estimated cost per panel for the average customer.

“When we have a full line, we’ll be able to calculate and give the costs for general customers,” she says. “Bringing costs down is something we are actively working on as we make production decisions. Economies of scale will also allow us to purchase various components at much lower costs and pass those savings on to future customers.”

Brusaw says so far, the company has relied on grants from the USDOT and over $2.2 million in donations from Indiegogo to support panel production, but it isn’t yet generating revenue.

However, she says that through upcoming projects like the Baltimore installation, and full production through its first manufacturing partners, the company plans to begin generating sales. She says additional revenue could also come from training and certifying distributors and panel installers.

Looking ahead, the couple say that when they obtain further funding, they plan to search for land on which to build a larger, custom facility in Sandpoint with a road track on which to test current and new products.

In addition to Scott and Julie, the company has hired one office employee, and an engineer, and plans to hire more employees as funding permits.

Scott Brusaw says, “The plan is for Sandpoint to be our center for research and development, where we’ll be working to perfect our product, as well as create new technologies.”

He says the company also plans to invite other inventors to their Sandpoint facility, to allow them to pitch their ideas and offer them help with engineering or research funding.

“We’ve already spoken with electric vehicle companies about designing roadways that could charge your car as you drive,” he says. “We’re also met with autonomous vehicle companies about being able to use solar pathways to communicate with and guide cars, as well as provide more exact GPS coordinates and information about road conditions.”

The couple estimate that Solar Roadways will begin installing its solar panels in residential roads and city walkways within the next two or three years.

“The biggest obstacle with roads will be red tape,” says Scott. “Roads have so many different rules and regulations depending on who owns it. The other issue that would have to be negotiated is who would get the power that’s generated by the panels.”

Julie adds, “There are many things to consider, and we realize it’s a disruptive technology that’s going to cause different people to have to collaborate in new ways. That’s why the plan has always been for roadways to be the last application of this technology.”

She says the company will encourage customers to start with smaller installations, so they’re able to get an understanding of how the technology works and how they’d like to use it.

“Currently, we’re only able to produce a limited number of panels, and costs to manufacture and install are still high,” she says. “So, we encourage people to start out with a smaller display so they can experience it, while they wait for costs to come down.”

The company’s ultimate goal is to be able to produce panels and make them available for do-it-yourself installation.

“We’re hoping to secure manufacturing partners now, not only so that we can lower costs, but so that eventually customers can just call in, order what they need, and install it themselves,” Julie says.

Julie came up with the idea for solar roadways when the couple were contemplating adding solar panels to their roof.

“I mentioned how I thought it made more sense to have solar panels on the ground for ease of access, maybe even as part of the driveway,” she says.

Scott says the idea of creating a material strong enough to withstand the weight of a vehicle, as well as protect electronics inside, was one he couldn’t stop thinking about.

“The trouble was developing a clear material capable of withstanding that amount of pressure,” he says.

Today, at its 5,000-square-foot Sandpoint facility at 721 Pine, the company produces solar panels that include LED lights, heating elements, and microprocessors. The microprocessors enable the panels to communicate with each other, a central control station, and vehicles driving on the surface.

The surface of each panel is made of tempered glass shipped in from Seattle, which is cut into hexagonal shapes and later laminated to the rest of the panel. The glass surface also contains frit (recycled glass fragments), which is baked into it to provide traction. The glass pieces are layered together with the circuit board, LED lights, and solar cells, then baked in a special oven to form the final panel.

Scott says the circuit boards used in each panel are manufactured in Ohio and include heating elements to prevent snow and ice accumulation on the glass surface. He says the LED lights inside the panels flash several color variations and can be used to illuminate road lines or display messages.

In order to harvest the power created by the solar panels, the Brusaws say roadways using solar panels would be equipped with underground cable corridors at the roadside, that would connect to an energy grid.

The Brusaws say that for smaller solar panels such as those used in home driveways, parking lots, or lighted displays, a virtual grid system can be used with a specialized meter from the utility company that provides net metering. Excess energy generated by the panels could be stored on the grid during times of low consumption and returned when needed.