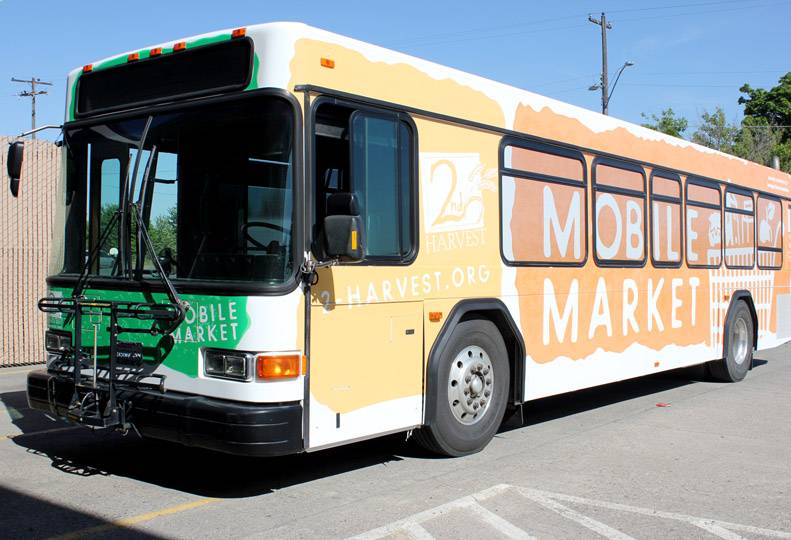 -—Second Harvest
After a collaboration between companies, nonprofits, and Spokane Transit Authority, Second Harvest’s Mobile Market will roll out into Spokane-area neighborhoods for the first time next month.

Several Spokane-area organizations and businesses have come together to provide a new avenue to free fresh food for the residents of some Spokane neighborhoods.

“The Mobile Market bus is going to add to our fleet of vehicles and, more importantly, provide another means to get food to people who need it,” Humphreys says. “It allows us to increase the number and the frequency of our food access points. With this bus, we can get into areas of Spokane that we really logistically couldn’t set up the Mobile Market (trucks).”

The bus will include refrigerated sections, shelves from which patrons can choose canned or boxed foods and other items, and volunteers to hand out samples of recipes featuring ingredients the food bank has in abundance or with which people might be less familiar.

The bus will focus on parts of the county that have been designated food deserts, which are low-income areas with limited access to grocery stores.

Waldref describes The Zone Project as a “collective impact initiative” that brings together more than 50 organizations in order to pursue community goals.

The idea for a food bank bus was partly born of a 2016 application for a federal Promise Zones grant, Waldref says. As part of the application, former director Andre Wicks had created a 10-year strategic plan to address several challenges faced by those living in the northeast area of Spokane.

Although The Zone Project didn’t secure the federal funding, the community was interested in making use of the 10-year plan, Waldref says.

“Everybody rallied around and said, ‘Well, we still want to implement some of our strategies,’” she says.

Part of the plan focused on combatting food insecurity. It was around that time, Waldref says, that Wicks discovered the Twin Cities Mobile Market, a grocery store that operates out of a decommissioned city bus through the St. Paul, Minn.-based Amherst H. Wilder Foundation.

“This particular model really caught his eye because one of the challenges identified by the community was that there are food banks, but they’re not open all hours, or they’re not always easily accessible,” Waldref says. “Second Harvest was getting more and more into bringing food to schools and to community centers, rather than expecting people to go to a food bank.”

Waldref was a member of the Spokane Transit Authority board when Wicks approached the board about donating a retired city bus for use as a mobile food bank. The board approved the request, but no buses were available at the time.

The Zone Project leaders chose the 46-year-old Second Harvest organization from a pool of proposals, and in 2017, the Smith-Barbieri Progressive Fund chose the Mobile Market bus project for a $65,000 grant, fund trustee Sharon Smith says.

“This was a perfect fit for us; it took very little deliberation,” Smith says. “Part of our main mission is reducing poverty by ensuring we get tools and resources to the people that need them.”

Last fall, Spokane Transit Authority was able to donate a retired city bus valued at between $5,000 and $10,000 for Second Harvest to transform into a food bank on wheels, STA spokesman Brandon Rapez-Betty says.

“At the time, STA was retiring six 35-foot coaches that had reached the end of their useful life,” Rapez-Betty says. “Vehicles at this stage are generally sent to auction or transferred to another transit agency. The Zone Project’s value to the community, in addition to the benefit from participating as a partner in the project, was the board’s justification for the title transfer.”

Second Harvest chose Truline RV to install a generator and air conditioners so that the bus could remain cool and refrigerated cases could maintain at low temperature without requiring the bus to keep its engine running. The company took components supplied by Second Harvest, which were paid for primarily through individual donations, and donated the labor to install the generator and air conditioners, says Truline RV owner Chad Yackel.

“We provided the equipment for the refrigeration and the shelving units that go into the bus, and we provided the layout and drawing for everything so we know it fits,” Cole says.

While Second Harvest has been providing food through Mobile Market semitrailers since 2006, Humphreys says the organization is continually searching for ways to innovate.

“People can’t work on the bigger things in their life and their life situations when they’re hungry,” Humphreys says. “The more opportunities they have to get healthy food in their hands, the better.”

Food deserts complicate the ability of those in poverty to access fresh, healthy foods, she says.

“When you just take Hillyard and the northeast area as an example, there are grocery stores there, but in some of those really impoverished areas the grocery store is a convenience store,” Humphreys says.

Waldref says the bus will focus initially on the Hillyard area, but The Zone Project and Second Harvest hope to expand Mobile Market bus service to other areas in Spokane.

“This bus will be parked in various areas, and people will actually walk through the bus,” Humphreys says. “They go through and they are able to choose their foods. They’ll have a true shopping experience.”

Second Harvest nutrition ambassadors will accompany the bus, Waldref says, and will offer recipes and cooking advice to patrons.

“That’s another barrier that we’ve identified in the community, is folks not knowing how to cook some of the healthier foods,” Waldref says. “We know that a lot of foods either people won’t take because they’re concerned they won’t know how to cook it, or they’re nervous about trying a new food.”

Smith says she hopes that the Mobile Market bus eventually will become much more than just a food bank.

“We hope services like the public health nursing department at WSU will come along as that goes on and follow the bus to give checkups to people,” Smith says. “Hopefully, it’ll turn into more of a festival atmosphere than just a daily task of getting food.”