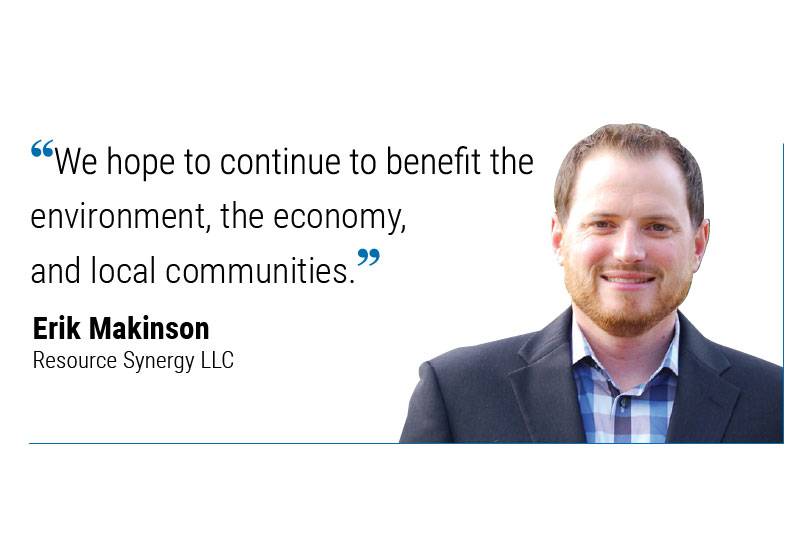 Resource Synergy LLC, a Spokane-based energy consultant, has agreed to pilot a waste-reduction program within five schools on Seattle’s west side, says Erik Makinson, the company’s founder and president.

Through the agreement with Seattle Public Schools, Resource Synergy will place cameras alongside the schools’ dumpsters and monitor what is being thrown away. The company’s cloud-based technology will accumulate data on how to mitigate contamination, and over the course of the year, the company will identify opportunities for reducing waste, Makinson explains.

He declines to disclose the total value of the project, which is still in its early stages.

Resource Synergy is located at 1821 W. Fifth in just over 1,500 square feet of office and warehouse space. The company’s annual revenue is growing at a rate of 30%, says Makinson.

He attributes the growth largely to requirements of the state’s Clean Building Act and the demand for conversion to LED lighting.

The company also plans to add more consistent, permanent positions as the business’ portfolio of clients grows, he says.

Makinson claims the company has worked with more than 150 businesses, nonprofits, and government agencies within the greater Spokane area to reduce costs associated with waste and energy efficiency.

Rina Fa’amoe-Cross, a resource conservations specialist for Seattle Public Schools, says she is enthusiastic about the company’s approach and the opportunities it will create for reducing the amount of waste that goes to landfills.

“They have such a strong understanding of the waste industry,” Fa’amoe-Cross says of the Resource Synergy team. “We hope we can partner with them on some other projects too.”

Resource Synergy also has secured contracts with the Portland School District and Seattle-based Diamond Properties. For Diamond, the company will be monitoring the dumpsters and starting recycling programs.

Makinson says he hopes to grow Resource Synergy’s scope of services in Spokane to include water and energy conservation while also expanding the company’s geographic base in the Puget Sound area.

“With our expansion, we hope to continue to benefit the environment, the economy, and local communities,” he says.