As his last 100 days in office near, mayor focuses on budget, future city relationships 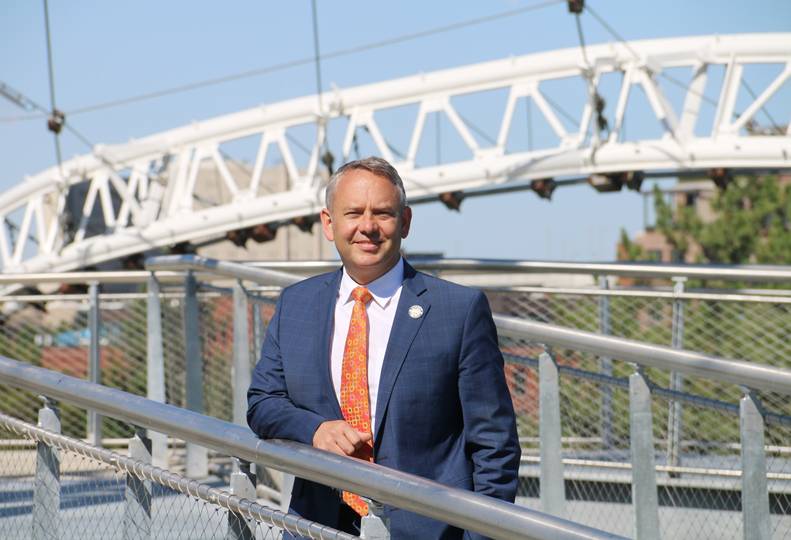 As David Condon approaches his last 100 days in office, Spokane’s first two-term, strong mayor is in a full sprint to the end.

Condon says he’s hardly reflecting on all his administration has accomplished in the last eight years. Right now, he’s more concerned with presenting a balanced 2020 budget to the City Council and setting up the city’s next mayor for success.

“I worry quite a bit about the financial viability of the city government,” says Condon, who publicly presented a rough draft of the budget last week.

“It’s well in the rearview mirror today, but remember, in 2012 we were in the third or fourth year of a recession and the city government had not been responsive to the financial realities,” Condon says.

Regarding the proposed budget, he says, “We’ve held fast, diligently and sometimes painfully, to a revenue projection that mimicked our 20-year average, not last year, or the year before, where we might have seen some significant upticks. The city’s in the long game; we shouldn’t be looking at quarterly returns.”

City of Spokane Chief Financial Officer Gavin Cooley says he’s not surprised by what he’s seeing out of Condon right now. And that is a mayor who’s operating just as hard now as he did when first took office.

Cooley, who recently announced he will retire near the end of the year or the beginning of next year, has worked for five mayors in the last 16 years. He contends Condon’s stamina exceeds that of the others.

“He’s got an extremely high energy level,” Cooley says. “And it’s been uninterrupted over the last eight years.”

“There’s an immense amount of information in his head – and he doesn’t get lost in it,” says Cooley. “The big and small details coexist in his head, and he can track them to drive outcomes.”

A graduate of Gonzaga Preparatory High School in 1992, Condon went on to earn his bachelor’s degree in finance from Boston College University’s Carroll School of Management.

He served in the U.S. Army for eight years and retired as a captain. From 2005 to 2011, he worked as the deputy chief of staff for Rep. Cathy McMorris’s office before running for mayor.

Condon, Spokane’s first multiple-term mayor since David Rogers held office from 1967 to 1978, says he’s not sure what he’ll do after his second term ends, but he’s going to continue working hard as he comes down the home stretch.

And what’s the motivating factor?

“Well, I’m going to live here for the rest of my life,” he says. “And the strategic plan embodies what I see, and this community sees, for the future.”

The four pillars of the strategic plan entail continuing to find new ways to develop the city’s infrastructure, creating a safe and healthy community, the continued enhancement of Spokane’s urban footprint, and support of sustainable resources, he says.

“I’m ready for a new chapter in my life, but I’m not willing to quit,” he says of himself and his administration.

“We’ll run to the finish line and hand the baton over from that November (election) date to Dec. 31,” Condon says. “I’m committed to having one of the smoothest transitions the city has seen.”

In addition to the budget, Condon says he’s focused on continuing to cultivate relationships between the city and Spokane-area businesses, nonprofits, and other organizations.

“I worry about our metropolitan collaborations,” he says. “The city isn’t going to do this alone. We need to use each other’s expertise.”

Regional collaborations are fraught with pitfalls and can be tenuous at best, he says.

“It always is on every deal,” he says.

The city’s action plan, which included a goal of raising the median household income, was funded through $450,000 allocated from 2017 sales tax revenue that came in higher than budgeted.

“Spokane alumni from across the country are looking at Spokane in a whole different way,” he says.

Condon points to Denver attorney Peter Mounsey, who heads Wonder Spokane LLC, which converted the former Wonder Bread bakery building at 821 W. Mallon into mixed-use space, as one of those examples.

“I would suggest the return (here) is still lower than what they see in other markets, but the barrier of entry is much lower and more sustainable over time,” he says.

Adds Condon: “Let’s be honest. His focus has been Denver for what, the last 30 years? He left after high school or college, and to see him come back into town is a sign that investors see a much more consistent and programmable return.”

Unlike his senior year at G-Prep when he couldn’t wait to leave town, Condon says he’s excited about the future for himself and his family.

“We love Spokane. Our plan is to stay in this awesome city. I’ve got three young kids (ages 10, 9 and 5); we’re going to look at how I can support my family and see what opportunities are out there,” he says.

“I definitely want to stay engaged in seeing where our city can go. I have a vested interest in it,” Condon says.