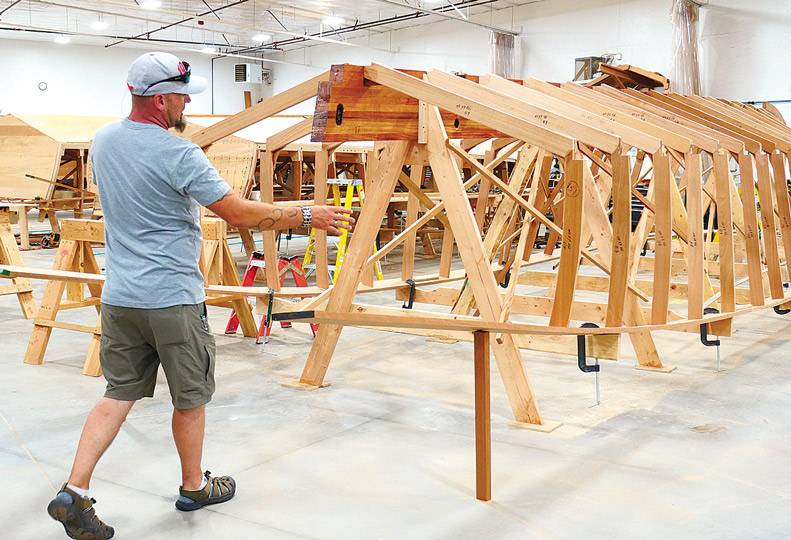 Hayden-based StanCraft Boat Co. has been experiencing strong growth with a 30% increase in total sales since the start of the pandemic, says Jory Schmeling, vice president of manufacturing at the handmade wooden boat manufacturing company.

The demand led StanCraft to create a construction arm, StanCraft Construction Group, in June 2021, in part so that the company could build more warehouse storage facilities.

“It got to the point, especially in the past three years with the economy and housing boom, that everybody was booked,” explains Schmeling. “We couldn’t get done what we needed to get done. So, we started it really to take on our own projects and just keep growing.”

StanCraft Construction Group currently is building a 25,000-square-foot fabrication building on the boat company’s 9-acre campus located at 2936 W. Dakota, in Hayden. The project is valued at $4 million and comes on the heels of two 12,000-square-foot storage buildings completed last winter, along with 12,000 square feet of fabrication space.

Robb Bloem, president and co-owner of the StanCraft companies, says the headquarters has just under 100,000 square feet of manufacturing space for wooden boat building.

The company’s aviation company, StanCraft Jet Center, located at Coeur d’Alene Airport-Pappy Boyington Field, opened in May of 2020. The $15 million facility is equipped with a 30,000-square-foot hangar and a 25,000-square-foot fixed based operator building that includes a café, indoor golf, sleep pods, and lounges for pilots to rest.

Schmeling says StanCraft was prompted to launch an FBO because many of the company’s clientele, who fly in and out of Pappy Boyington Field, were inquiring about matching the upholstery in their private jets with their StanCraft boats.

“We saw an opportunity there to almost brand a StanCraft edition with mahogany finishes and custom upholstery,” says Schmeling of the aircraft interior work.

In addition, the Jet Center also is preparing to begin taking in international flights. Bloem says the Jet Center has a 20,000-square-foot hangar with space for U.S. Customs and Border Patrol, along with additional offices, that is out for bid and anticipated to begin construction in the spring of 2023.

Altogether, the three companies have about 200 employees and projected annual revenue over $200 million, says Bloem. A majority of that revenue is attributed to the StanCraft Construction Group.

StanCraft Boat Co. was founded by Stanley and Delores Young in 1933 in Lakeside, Montana, near Flathead Lake. The couple passed the business to their son, Syd Young, who specialized in his own design, the Nor’Wester 260, a fiberglass cabin cruiser. When Young decided he wanted to start to step away from the company, his daughter and son-in-law Amy and Robb Bloem moved back to the area from Seattle and worked out a deal with Young to purchase the company over a five-year period.

Business was slow, with sales of three to five boats a year, says Schmeling. “It was really Robb who had the innovation to change StanCraft and get into more speed and curvy, unique lines.”

In 2006, StanCraft designed and built a 36-foot missile shaped boat for famed NFL quarterback John Elway. Powered by twin 700 horsepower V-10 Viper motors and capable of speeds in excess of 80 mph, the sleek craft was featured on several magazine covers and drew attention to StanCraft within the luxury boating world.

“It changed StanCraft to modern technology and engines,” says Schmeling. “It was no longer just a boat to take to the boat show. It was something functionally fashionable.”

The Bloems completed the purchase of the company and name from Young in 2009. Their children, Elliott and River, also have started working in the family business.

“River is just like his father, an entrepreneur,” says Schmeling. “He’s making wooden surfboards right now. We are so backed up in those orders I have to hire more staff.”

Schmeling says StanCraft has sold nine or more boats a year since he began working for the company as a boat builder in 2008. In that time, the company has only laid off one employee, who was rehired at StanCraft three weeks later.

“We couldn’t get him back fast enough,” he says.

StanCraft Boat Co. is at its production capacity with 15 boat sales to be handcrafted and delivered to its customers in 2023.

Each handmade boat takes between nine and 12 months to build, averaging around 6,000 man-hours per boat. Sales occur primarily from July through September, and completed boats are delivered the following summer.

Because custom boat building requires long lead times, StanCraft hasn’t been impacted severely by supply issues and has managed to keep materials in stock, says Schmeling. The company purchases raw African mahogany, from Ghana, which takes a year to transport.

The average price tag for a handmade StanCraft boat is $1 million, with upper-end models going for $1.8 million.

StanCraft’s main customer base is within a 100-mile radius of Hayden, says Schmeling. “On Coeur d’Alene Lake, on the right day, you’ll see between 50 and 100 StanCrafts.”

Even so, StanCraft has sold boats nationally to customers based in California, Maine, Connecticut, and New Hampshire. Worldwide, StanCraft has orders from Dubai, New Zealand, and Thailand.

Schmeling, who was a chef for 10 years before starting with StanCraft, says there’s not much he doesn’t love about boat building.

“I love that no two boats are the same,” he says. “Even if you’re building the same boat, you are working with a living product. Wood is constantly moving, it’s swelling, it’s shrinking. It’s just unique.”